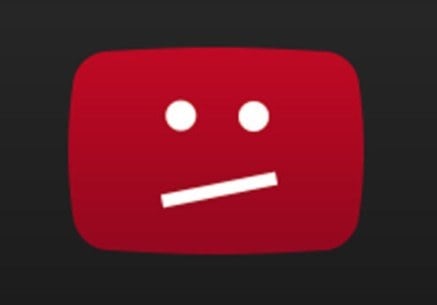 
It’s well known that YouTubers can lose their channels and videos when they’re repeatedly accused of posting copyright-infringing material. Interestingly, the senders of questionable takedown notices are also at risk. A few days ago, YouTube terminated the “Musical Creator” channel on suspicion of sending a fraudulent copyright claim.

YouTubers who receive three copyright infringement strikes can easily lose their channels, which for some equates to their livelihood.

Over the years we have seen numerous examples of YouTubers whose accounts were terminated after repeated copyright claims, legitimate or not. Examples of claimants being punished are rare though.

The only example that comes to mind is the lawsuit YouTube filed against a scammer who extorted people through the takedown process. The man, who requested payments in exchange for retracting bogus copyright claims, eventually settled the matter and offered a formal apology.

In recent years there have been increasing calls to hold senders liable for such false claims. This even reached the political agenda where it’s now being considered as part of the DMCA review.

YouTube doesn’t need a new law to police its own platforms though. This week we stumbled upon a rare example that shows how the video streaming service is actively punishing alleged fraudsters.

Yesterday, the owner of the “Musical Creator” channel complained that their channel had been terminated after submitting a copyright takedown request. The operator of the channel doesn’t appear to be a native English speaker as the comment below shows, but it’s clear that they disagree with this decision.

“My youtube channel MUSICAL CREATOR has been terminated due to inlegal information copyright infringement. But I not violating any policy of youtube, I don’t know how my channel is terminated I filled out all the information legal. I want to get back my channel again,” the operator writes.

The YouTuber explains that they reported someone else for copying their video and that their own channel was terminated as a result. According to a follow-up message from YouTube, the initial takedown notice is seen as potentially fraudulent.

“We are concerned that some of the information within this legal request may be fraudulent,” YouTube’s response reads. “Please understand that YouTube receives a large number of fraudulent copyright takedown requests, and we take abuse of that process very seriously.” 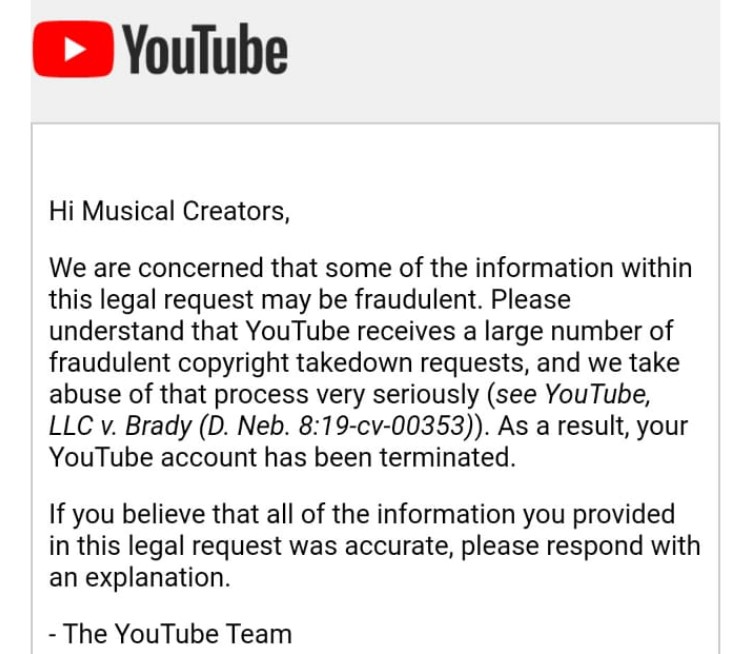 The YouTube support team references the aforementioned lawsuit filed against the extortion scammer. At the same time, however, it also provides the affected user with the opportunity to prove that their copyright claim is accurate.

“Musical Creator” says that they sent their passport to YouTube but, at the time of writing, the channel remains offline. Visitors are informed that the account was terminated for a violation of YouTube’s Terms of Service.

This is the first time we have seen an example of this rigorous punishment in the wild. This could be in part because “rightsholders” are less likely to complain in public.

Unfortunately, the support thread doesn’t include any further details and we were not able to contact the affected user directly. This means that there’s little we can say about the validity of YouTube’s action.

That said, these types of fraud accusations and account terminations are unlikely to happen without a manual review of some sort.