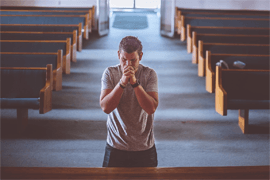 
Last December music publisher BMG found itself at the center of a major copyright dispute after offending the entire Jehovah’s Witness religion. According to the lawsuit, BMG illegally used a song owned by the group in a for-profit Christmas album, featuring songs from other faiths, which were set to be sung in cathedrals. Five months later, the warring parties have agreed to stand down.

The Watch Tower Bible and Tract Society is the supervising body and publisher for the Jehovah’s Witness religious group. As such, it is building quite a reputation for targeting those that infringe its copyrights.

Watch Tower’s targets are often smaller players who publish its songs and videos on platforms such as YouTube and Facebook without permission, sometimes when the stated aim is criticism or parody. However, last December the powerful organization took on a more heavyweight adversary.

Music publisher BMG is also well known for its litigious nature, having aggressively pursued ISP Cox Communications through the legal system after the ISP allegedly failed to disconnect so-called repeat infringers. That matter ended with Cox paying an undisclosed but substantial settlement to BMG.

The problem was the addition of the song “Listen, Obey and Be Blessed” and it wasn’t particularly difficult to see why. Jehovah’s Witnesses do not celebrate Christmas and don’t allow their copyrighted works to be exploited commercially. They also reject all other religions, quite the problem in an all-inclusive religious Christmas album that they played no part in.

But Watch Tower rejected any use of its song, demanded an injunction, and sought statutory damages for BMG’s infringement.

After being filed on December 22, 2020, the lawsuit proceeded largely as expected but then, on January 19, 2021 – the date by which BMG was required to enter a response – the publisher wrote to the Court seeking more time.

“The parties are engaged in ongoing good-faith settlement discussions, and extending the deadline to respond to the Complaint will allow the parties to focus on settlement efforts,” BMG wrote.

“BMG makes this request without waiver of and specifically preserving BMG’s right to assert any and all defenses in this matter, including but not limited to lack of personal jurisdiction and other jurisdictional defenses.”

The next day the Court granted an extension but in March BMG was back again, asking for more time, a request that was repeated again in April. The Court granted another 30 days on April 21 but told the parties there would be no more extensions. Right on the button, on May 20, 2021, the parties informed the Court that a settlement had been reached.

“We write to inform the Court that the parties have entered into a confidential settlement agreement resolving the claims set forth in the Complaint,” the letter reads.

“In light of the parties’ settlement, Defendants would like to avoid the cost associated with responding to the Complaint, and request (with the consent of counsel for Plaintiff) that no default be entered prior to June 4, 2021.”

With no answer to the complaint set to be presented to the court, it’s impossible to know how BMG would’ve structured its defense but with a settlement having been reached, the matter is already over. That was finally confirmed last week when Watch Tower filed a notice of voluntary dismissal with the Court.

“Please take notice that, pursuant to Rule 41(a)(1)(A)(i) of the Federal Rules of Civil Procedure, Plaintiff Watch Tower Bible and Tract Society of Pennsylvania hereby voluntarily dismisses this action against all Defendants with prejudice,” the notice reads.

The argument in the case could have proven of interest to observers but perhaps wisely, both parties have agreed to settle their differences in private. There are, however, some public signs of concession by BMG.

The song “Listen, Obey and Be Blessed” has now been removed from the digital download version of the album available on Amazon, reducing the available tracks from 14 to 13. How one also makes right any offense caused to a religion’s standards is unclear but since Watch Tower previously demanded damages, money may also be part of the deal.