During today’s pre-fight press conference for UFC 257 Poirier v McGregor, UFC President Dana White had an interesting prediction on piracy. Informing journalists and the thousands tuning in online that “we got one”, he invited illegal streamers to tune in on Saturday night and “see what happens.” More bluster from the UFC or is it time for a proper beatdown?

Earlier this month, UFC President Dana White delivered a trademarked foul-mouthed response to a UFC fan on Instagram who said he was looking forward to pirating the next pay-per-view.

The outburst provoked a lot of discussions, including our analysis of his legal options, should the UFC decide to step up to the plate and deal with piracy as promised.

Quite what the UFC has planned still isn’t clear but today, during the pre-fight press conference for UFC 257 Poirier v McGregor, White had more news – and more threats for pirates.

Soon after the conference got underway, a member of the press reminded Dana of his warning earlier in the year, asking whether he had any remorse for agitating the pirating masses with his previous outburst.

“This is a huge PPV event to kick off the year. You kinda stirred the pot a little bit with the piracy, the online streamers, they want to come after you and give this thing away. Any regrets?” the interviewer asked.

Never one to back down, White responded with new information and apparent progress in the fight against pirates. 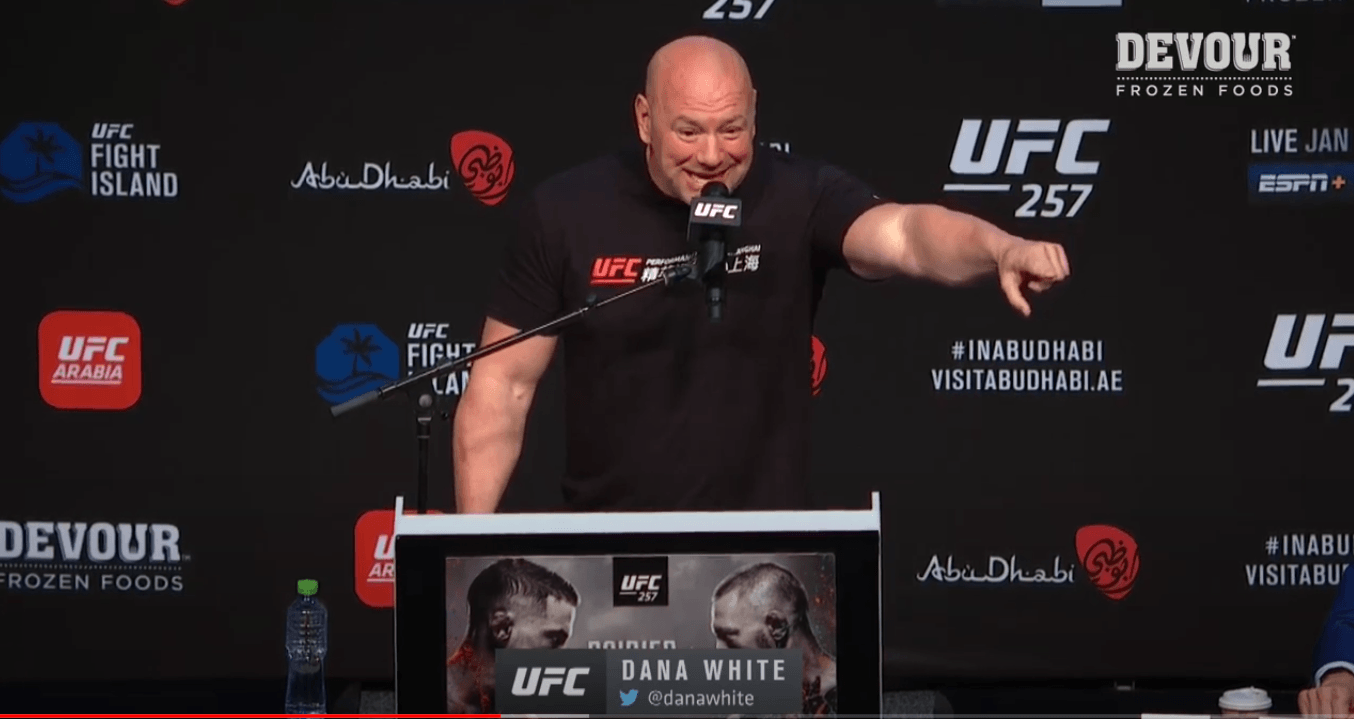 “Oh, I’m glad you asked me about that because…we got one. We got him,” he said with a broad smile on his face. “We’re watching this guy right now. All you have to do is turn it on on Saturday. And we got you f****r. I can’t wait.”

Appearing to broaden his threats beyond the unnamed individual in question, White then turned to the fans intending to stream the event illegally.

“Turn it on on Saturday streamers and see what happens. Thank you for asking me that question.”

Dana White’s piracy threats over the years have all had something in common: they always sound tough but rarely carry enough information to work out what he means. That said, there are some clues that provide a taster of what this could be about.

So in the same way that the fighters will be trying to work out each other’s strategies in advance of stepping into the Octagon, let’s have a little think about this conundrum.

Importantly, while Dana White and the UFC claim to be “watching” someone “right now”, that person – whoever he or she is – doesn’t appear to be aware of that, at least not yet. If they were, then the UFC’s lawyers would already be all over them and it’s doubtful their stream would go ahead. Then there would be no surprise to tune in for.

So, if we presume that the UFC is lying in wait and then add in the other threat (that illegal stream viewers should tune in on Saturday “and see what happens”) there appears to be a suggestion that both the illegal stream provider and his/her viewers will all get a surprise at the same time. And that is absolutely possible.

Those with experience of pirate UFC streams will already know that major broadcasting companies can unwittingly supply the source material. For example, it is not uncommon for the UK’s BT Sport feed to be used as a source which is then spread around multiple IPTV providers and streaming sites in close to real-time.

However, in common with similar broadcasters, BT Sport is technically able to discover which of its customers is ‘stealing’ its content and restreaming it. It therefore follows that if a customer can be identified, they can also be cut-off. Or, considering Dana’s excitement, could even be presented with an alternative video stream containing a warning they have been ‘caught’. Just before and in place of the main event, for example.

Of course, all of the above is complete speculation and White’s threats may yet come to nothing. But he seemed excited – very excited – at the prospect of making his mark.

Event Expected To Do Well, Despite Piracy

Another journalist asked White whether the event was trending as expected. White seemed confident that pay-per-view buys would be up to scratch.

“It’s very good, this thing is trending great. Yeah, it’s good. It’s gonna be good. When was there a bad one? Since the pandemic started there hasn’t been a bad pay-per-view, they’ve all been over-performing, so you can only imagine what this is going to do,” he said.

Considering the UFC doesn’t appear to have much of a problem selling its product, it will be interesting to what the MMA organization has in store for pirates on Saturday night and what effect it will have moving forward. Unfortunately for the UFC, stopping a single source during the PPV isn’t going to cut it, but if large numbers of people miss the main event, that could have a knock-on effect.