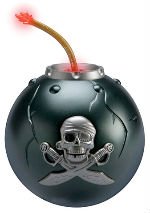 Aside from those who seek to profit from it, no Internet-connected device owner on the planet enjoys the threat of malware.

Malware comes in various shapes and sizes and is never a good thing to be exposed to. It has the potential to do serious damage at the computer level and seriously disrupt people’s lives. That’s why everyone is encouraged to run decent security software on most operating systems to mitigate the threat.

As we have reported many times previously, the fear of malware infestation is being leveraged to try and deter people from using pirate devices of all kinds. The claim is that these hardware devices and the software installed on them represent a looming threat, ready to steal banking details and much more besides.

Unfortunately, the anti-piracy groups making these claims refuse to go into specifics. Despite showing concern for users, they will not reveal which devices or software are causing the dangers, or what those dangers are. If these threats genuinely exist, this is extremely unhelpful, not only to those supposedly under threat but to their overall deterrence goals.

Just recently, following the publishing of a survey carried out in the UK, we had to go to some lengths to gain access to even part of the supporting evidence claiming that piracy devices are a malware threat. Even then, the findings were dubious, to say the least.

Late last month the Digital Citizens Alliance (DCA), which is partly funded by the entertainment industries, published yet another report warning of the dangers of malware in respect of pirate devices.

At least on the surface, the key findings of their study make for snappy reading.

After surveying more than 3,600 individuals to see how they are streaming movies and TV shows while they are “sheltering at home”, the DCA said it had found that 20% of Americans were consuming content from pirate websites.

More specifically, the DCA said that around 10% of Americans have a “pirate device with apps” in their home.

Quite what constitutes a ‘pirate device’ under the terms of the study isn’t made clear so as a result, we were keen to see additional information so that we could report properly. Unfortunately, the DCA ignored our request to review the actual study, including the questions asked and answers received, which is not really how these things should work.

According to the DCA, however, the mere existence of ‘pirate devices’ in the home is a serious concern.

“A research survey commissioned by DCA found that those who had piracy devices and apps in the home were three times more likely to report an issue with malware than those who didn’t have such a device in the home,” the DCA added, supplying the chart below in support. 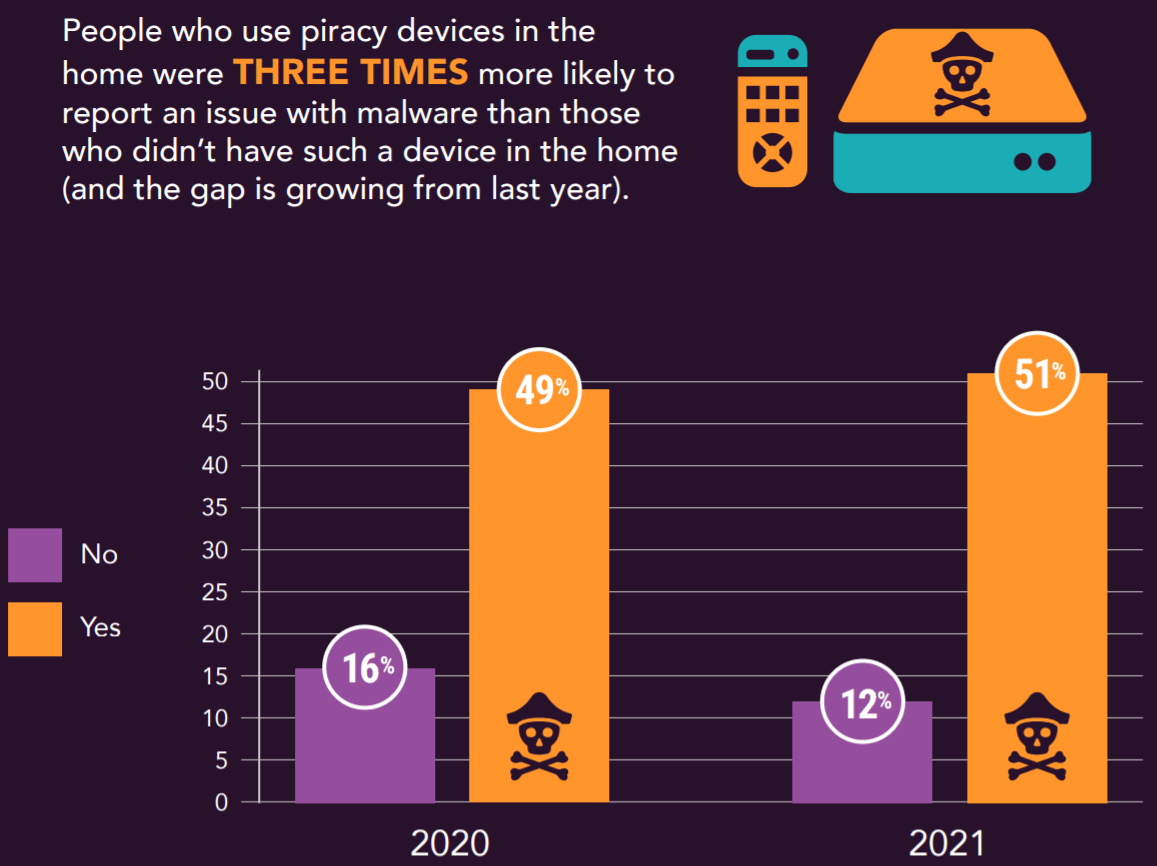 The pretty obvious suggestion here is that people with pirate devices “in the home” are much more likely to encounter malware “in the home” but nowhere in the report does it state that the devices actually caused the malware incidents to go up. Of course, it is possible that the devices were to blame but correlation does not imply causation and any number of other factors could have played a part.

Again, this is why access to the finer details of the study is important. The study does not say that people had malware on their ‘pirate devices’, only that they had a “malware issue” somewhere in a home where one was present. However, DCA does strongly suggest that people should directly connect the two pieces of information, since if a ‘pirate device’ has access to a home network, “it may try to infect other devices.”

The DCA study then moves on to some other findings that it clearly hopes will sound the warning sirens more broadly, including within government.

We’ve heard time and again, without supporting evidence, how pirate devices can supposedly ruin people’s lives but the DCA study seems to want to broaden that fear beyond the individual.

Indeed, there appears to be an effort to raise the alarm bells at the highest levels since – apparently – law enforcement, national security and military personnel are putting the country at risk with their piracy habits.

“Millions of Americans who are conducting sensitive or confidential work on home networks during the COVID-19 crisis are substantially more likely to face malware and other security threats if they also have piracy devices and apps in their homes,” the DCA writes.

“The findings [of the study] are particularly troubling when it comes to those who work in jobs that can include sensitive or confidential information, such as corporate finance, national security, government, or the medical and legal fields.” 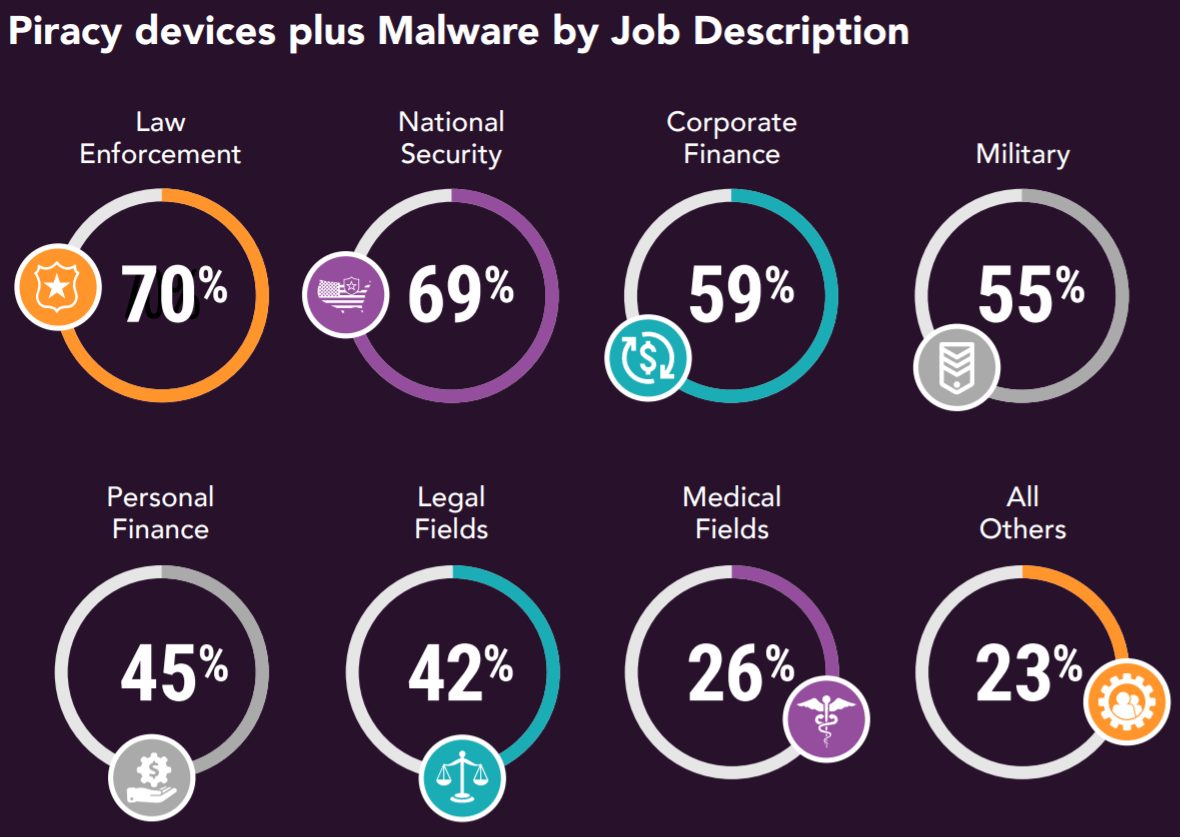 As the image above shows, respondents who work in law enforcement appear to have quite the problem. Indeed, of those who admit to using pirate devices (a bizarre problem in its own right), 70% appear to have had “malware issues” in the last year. National security workers are only marginally better off with 69%, with corporate finance and military workers well above the average with 59% and 55% respectively.

Considering that a loose correlation/causation formula appears to be acceptable when trying to prove a point, we might conclude that law enforcement and national security officers experience the most malware problems because they buy their pirate devices from the most unreputable suppliers, people they encounter adversarially doing their day jobs perhaps?

If that’s the case, maybe they should take a lead from the medical professionals, who are almost three times less susceptible to malware. Perhaps they have good ‘pirate’ suppliers or are just good at dealing with viruses – as many are during the pandemic.

Sarcasm aside, we want to reiterate that despite reaching out with a request to see the finer details of the study, our requests for additional information were ignored. Without that information, compiling a sensible report and offering support to the study is problematic.

That’s disappointing since we are extremely keen to expose this malware threat in detail, should there be one. No one benefits from malware and if the problem is to be dealt with effectively, those who have the information should either share it, or expect it to continue.

No amount of these types of unsupported surveys will make a difference on the ground but expect them to appear in policy documents moving forward and undoubtedly taken as proven fact.