The developer of action role-playing game Kingdom Come: Deliverance has hilariously turned the tables on the cracking group that first put a pirated copy of its game on the Internet. With its tongue planted firmly in cheek, the Czech company is now selling limited edition metal posters of Codex’s game-accompanying NFO file, hoping that sales of the high-quality knock-off will “support the developer”.

For developers of PC games around the globe there are three certainties – death, taxes and online piracy. While this trio are rarely the subject of amusement, developer Warhorse Studios is doing its best to satirize the latter.

After releasing its action role-playing game Kingdom Come: Deliverance early 2018, the game was quickly cracked by infamous underground group Codex, who released the title online for consumption by the pirating masses. It’s unclear to what extent this event affected sales but within a week of its launch, it had sold a million copies, including more than 300,000 on Steam.

With two million copies sold in the year that followed, Warhorse Studios clearly had a hit on its hands but this year the company showed that it also has a sense of humor. While publicizing a revamp of its headquarters in Prague, the company revealed that it had framed a copy of the information (NFO) file released by Codex with its pirate release, giving it pride of place near the company’s kitchen. 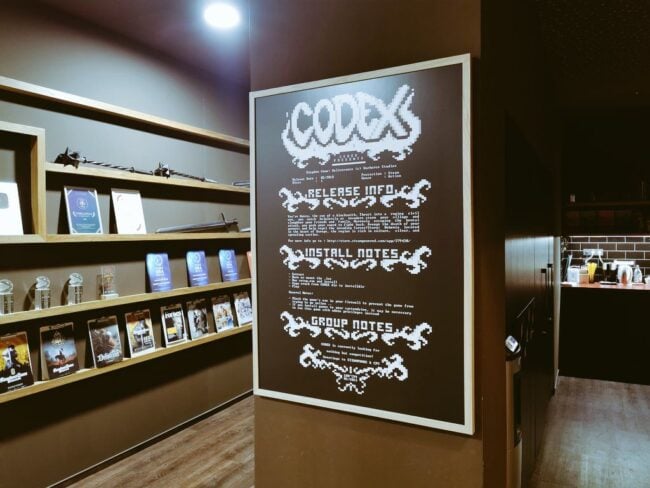 This unorthodox move was met with delight by many of the developer’s fans while also gaining it respect among those who might not traditionally part with cash to enjoy its work. And now, just a month later, Warhorse is poking yet more fun at the piracy phenomenon with another hilarious stunt that may even see it raise a bit of extra cash.

Offered at Displate.com, Displates are described as “one-of-a-kind” metal posters “designed to capture your unique passions.” Their creators note that they’re “sturdy, magnet mounted, and durable enough to withstand a lifetime of intense staring.”

So, if you’re into staring intensely at pirate-created artwork for an eternity, boy does Warhorse Studios have something for you. Pirate ASCII art, preserved on metal. 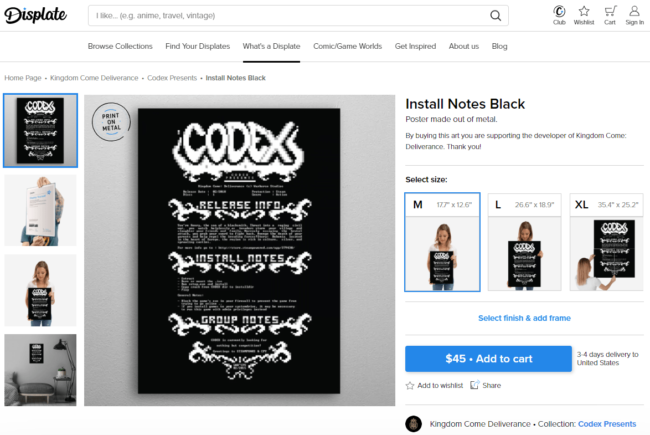 Warhorse previously explained that it had upscaled the Codex NFO file using AI software, so it’s likely that these metal posters will be of exceptional quality. They are available in three sizes – medium, large, and extra-large – with the latter presented in quadriptych format – i.e four posters combined to make one big image. There’s also a range of colors.

It’s obvious that Warhorse has a sense of humor but it also understands the piracy scene. Many so-called ‘scene’ release groups state that if you enjoy a pirated copy of a game, you should buy it to “support the developer.” With its metalized NFO offering, the developer states in the description that by buying the pirated poster, people will be “supporting the developer of Kingdom Come: Deliverance.”

Pirating the work of pirates is a humorous concept, especially given that the NFO itself almost certainly enjoys copyright protection. Obviously Codex isn’t in any position to do anything about that, which makes the whole episode even more delicious. All that being said, Warhorse certainly doesn’t endorse copyright infringement.

“In all honesty, putting up the CODEX Info was meant to be a joke and a form of self-irony. This doesn’t change the fact that piracy still harms various industries,” PR Manager Tobias Stolz-Zwilling told TF referencing the company’s NFO shenanigans.

“But in the case of Kingdom Come: Deliverance we can rely on and be proud of a strong and loyal community that supported us way before release and even years after. Anyone who intends to pirate your game wouldn’t buy it anyway. All in all, we strongly believe that in a tense world and a tense industry, one should maintain a healthy sense of humor.