A viral marketing company is engaging in blatant copyright infringement as part of a new campaign. MSCHF has launched AlltheStreams.fm, a ‘pirate radio’ site that is currently streaming shows from Netflix, Disney+, HBO Go and others with zero permission from copyright holders. The company informs TF that once one network shuts it down, five others will take their place…. 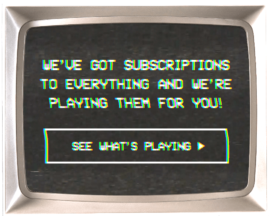 The legal online movie and TV show streaming landscape has expanded rapidly in recent years but has now developed its own issues.

From having no platforms just a few years ago, there are now many with each attempting to create space for their own exclusive offerings. As a result, consumers must now subscribe to them all at great expense to get everything they desire, something that most wallets are averse to.

At least ostensibly, this is the problem being addressed by AllTheStreams.fm, a self-proclaimed ‘pirate radio’ video site. At the time of writing it is streaming shows from Hulu, Disney+, Netflix, HBO Now, Prime Video and Showtime, all for free.

When we tuned in we were greeted by The Office from Netflix and The Mandalorian from Disney+. 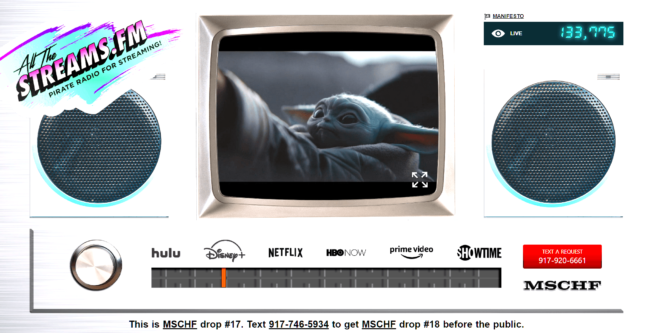 Of course, the latest Disney shows being streamed online for free isn’t something one should ever expect. The AllTheStreams ‘manifesto’ is curious too.

“Netflix has all the Netflix stuff, Disney has all the Disney stuff, and never the twain shall meet. Let’s change that, however briefly,” it reads.

“Whenever media becomes inaccessible, piracy thrives again – from the 1960’s BBC 1-hour limit on pop music, to the iTunes store mp3 tyranny of the 00s. Today, All The Streams comes in response to the fragmentation and walled-garden paradigm that has risen to prominence for online video streaming services.”

The people behind AllTheStreams say they don’t care about several things, including but perhaps not limited to user-utility, scalability and terms of service. “All The Streams is made to revel in platform independence, and to demonstrate how even the most lo-fi hacks can be the equal of giants. We’re going to play anything and everything we feel like,” the manifesto continues.

“We’re going to make a frankensteinian playlist of media that none of these streaming platforms could ever recommend to you because it would cost them the profits of their exclusively-owned content. Sit back and enjoy the ride: like all pirate media offerings, we’re doing this for you.”

In the bottom right-hand corner of the site are five fairly familiar letters – MSCHF. Said quickly we hear ‘mischief’, something that the company of the same name has caused plenty of.

MSCHF is a marketing company that claims to run on “structured chaos“. It previously developed a browser add-on that disguised Netflix viewing as a conference call, launched an Internet restaurant that transformed corporate perks into a tool to attack corporations, and sold Air Max 97s with ‘Holy Water’ in the sole.

So what’s this latest campaign all about? TorrentFreak spoke with CEO Gabriel Whaley who didn’t give away too much but pretty much admitted that the campaign is infringing copyrights.

“We don’t have any permissions to be running this whatsoever. But once one network shuts us down, five stand in their place!” he said.

That sounds a little bit like the pirate mantra (shut down one site, another five will appear) completely turned on its head, which is another curiosity. We put it to Whaley that if AllTheStreams doesn’t have permission to stream The Mandalorian online to the masses for free, then it’s possible that the Alliance For Creativity and Entertainment could be paying a visit quite soon.

We received no response to that thought but given MSCHF’s record, of engaging in over-the-top stunts to gain exposure, the legal aspect must have at least crossed the company’s mind. We asked if a calculation had been done to balance the potential marketing exposure against potential legal fees and what the endgame might be, but that didn’t help much either.

“Haha,” Whaley added. “MSCHF’s only endgame is the endgame itself.”

It’s almost impossible to work out what MSCHF is trying to achieve here. Maybe they have some kind of plan to bring all streaming services under one roof at a fair price and if so, that would be impressive, if brutally obvious. Given their history, however, it’s more likely they’re hoping to sell out a new line of exclusive sports clothing for cats made entirely of cheese.

If the company is looking for exposure, which it most certainly is, it has the right recipe here. Perhaps Disney will supply the crackers. Or the lawyers.