Two defendants have pleaded guilty for their role in the operation of two streaming services that offered access to pirated movies and TV-shows. According to the U.S. Department of Justice, ]iStreamItAll and Jetflicks were among the biggest illegal streaming services in the US. The platforms used torrent and Usenet sites to source thousands of pirated videos for their platforms, which were offered to the public for a monthly subscription fee. 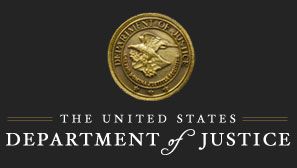 Earlier this year a federal grand jury charged eight men for their involvement with the streaming services Jetflicks and iStreamitAll.

The platforms, which were headquartered in Las Vegas, offered a wide range of pirated videos that could be accessed in exchange for a monthly subscription fee.

This week, two of the defendants pleaded guilty. The first is Las Vegas resident Darryl Julius Polo, aka djppimp, who was involved in both services through which he earned over a million dollars in revenue.

In a plea agreement, Polo admits the various counts of criminal copyright infringement and well as a money laundering charge. The copyright offenses carry a maximum penalty of five years in prison and money laundering is punishable by up to 20 years incarceration.

Polo both owned and operated iStreamitAll (ISIA) which he launched after being involved with Jetflicks. In a signed statement, he admits that ISIA offered access to 118,479 different TV episodes and 10,980 individual movies.

Between September 2014 and December 2016 the streaming service processed at least 18,551 successful credit and debit card charges. The associated subscription fees ranged from $19.99 per month up to $179.99 per year.

According to the agreed statement of facts (pdf), Polo pitched his service to potential clients by pointing out that it offered more content than competing legal services such as Netflix, Hulu, Vudu, and Amazon Prime.

“In fact, the defendant sent out emails to potential subscribers highlighting ISIA’s huge catalog of works and urging them to cancel Netflix, Hulu, and similar services, and subscribe to ISIA instead,” it reads.

The various movies and TV-shows were sources from Usenet and torrent sites. Polo had set up an automated system where software including SickRage, Sick Beard, and
SABnzbd scoured the Internet for pirated content which was then stored by the service so it could be streamed to subscribers.

“These tools allowed the defendant to search for pirated movies and television shows available on some of the most popular torrent sites in the world, such as The
Pirate Bay, RARBG, and TorrentDay, as well as some of the largest Usenet NZB index sites,” the statement of facts reads. 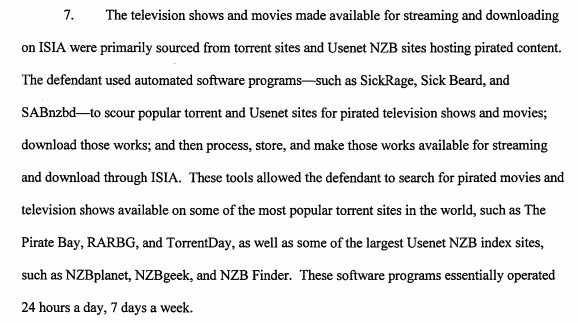 The streaming service was not the first piracy operation Polo was involved in. He further admits that he operated the NZB indexer SmackDownOnYou, BoxBusters.TV, Jailbreakingtheipad, and the music piracy site MixtapeUG.

In addition to Polo, 40-year old Luis Angel Villarino from Las Vegas also pleaded guilty. He admits his involvement as a programmer for Jetflicks from December 2016 to at least June 2017.

Villarino agreed to be charged with one count of conspiracy to commit criminal copyright infringement, which carries a maximum prison sentence of five years.

Jetflicks used many of the same sources as the ISIA streaming service. It was tailored towards TV-show content and listed thousands of shows that could be accessed through a subscription. Both services worked in regular browsers and through various apps, including a Kodi-addon.

According to Villarino’s signed statement of facts (pdf), he mostly worked as a programmer to optimize the scripts that fetched the pirated TV-shows.

“The defendant mostly worked on solving problems with the Jetflicks’ computer scripts that co-defendants Darryl Julius Polo, Peter H. Huber, and Vaillant had written or refined and that were designed to help locate, download, process, store, stream, and make available for downloaded pirated television shows.”

In exchange for the guilty pleas, both defendants can expect a lower sentencing recommendation. They agree to cooperate fully in any further investigations and may have to provide information on and testify against the remaining six defendants, who go to trial in February 2020.

Polo and Villarino will be sentenced a month later. Both men must pay restitution to their victims while their criminal proceeds will be forfeited. In Polo’s case, that’s at least $1 million.