TuneIn is one of the most prominent providers of radio content in the world.

Available for free or on a premium basis, its site and associated app provide access to more than 100,000 stations and podcasts. Unless you happen to live in the UK, which is now dramatically underserved by the company.

Sued by Labels in the UK For Mass Copyright Infringement

In 2017, Sony Music Entertainment and Warner Music Group sued the US-based radio index in the High Court of England and Wales, alleging that the provision of links to stations unlicensed in the UK represented a breach of copyright.

One of the most interesting aspects of the case is that TuneIn is marketed as an “audio guide service”, which means that it indexes stations that are already freely available on the web and curates them so that listeners can more easily find them.

When stations are more easily found, more people listen to them, which means that TuneIn arguably boosts the market overall. Nevertheless, the labels claimed this was illegal and detrimental to the music industry in the UK on licensing grounds.

Decision by the High Court Handed Down in 2019

In November 2019, the High Court sided with the labels, ruling that unlike Google – which TuneIn had attempted to compare itself to – TuneIn did “much more than that”, in part due to its curation and search features in respect of those stations.

“I find therefore that the activity of TuneIn does amount to an act of communication of the relevant works; and also that that act of communication is to a ‘public’, in the sense of being to an indeterminate and fairly large number of persons,” Judge Birss wrote in his decision.

TuneIn sought to paint this latter point as a victory but that still meant that it had breached copyright on a large scale as the majority of stations indexed by TuneIn and supplied to the UK market did not fit into this scenario.

Appeal and Subsequent Geo-Blocking of the UK

In December 2019 it was revealed that the High Court had granted permission for both sides to appeal. Pending an outcome in that matter, TuneIn’s service in the UK apparently remained unchanged but during the past few days, users of the service reported a major shift in the type and amount of content being provided to UK users.

In response to the apparent decimation of its offering, TuneIn took to Twitter to address the complaints.

“Due to a court ruling in the United Kingdom, we will be restricting international stations to prohibit their availability in the UK, with limited exceptions. We apologize for the inconvenience,” the company wrote.

TorrentFreak contacted TuneIn to ask why this action had been taken now and to receive an indication of precisely how many channels had been blocked and their nature. However, at the time of publishing the company had failed to offer a response, leaving customers – some of whom pay for a premium service – to simply guess where their favorite stations had gone and when (or even if) they would ever return. 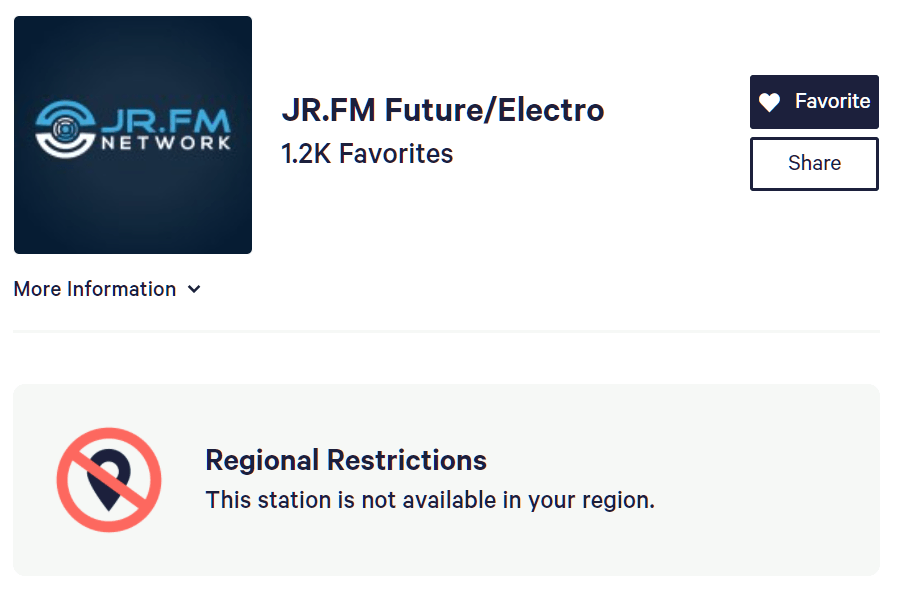 With TuneIn staying completely silent on the important details, it’s impossible to know whether the company will obtain appropriate licensing to reinstate the lost channels in the future. In the meantime, listeners now have access to a fraction of the channels previously available on the TuneIn site and app.

As pointed out by a reader last evening, in common with many services that restrict output in various regions, TuneIn’s blocking efforts are not comprehensive and can be easily circumvented by listeners in the UK.

It transpires that with the use of a decent VPN, one that’s able to switch the user’s virtual location out of the UK and to some other country, the blocked channels/stations are restored to their former glory and accessible in exactly the same way as before. The precise blocking method being used by TuneIn isn’t clear but it’s nowhere as stringent as that deployed by Netflix, for example.

An aspect of TuneIn’s blocking that shouldn’t be overlooked is a ‘feature’ of the service itself. TuneIn is a catalog of streams that are already freely available on the Internet. This means that TuneIn acts only as a middleman, indexing stations and making them searchable. While this function is extremely convenient for users, those locked out by TuneIn may only have to do a little research to regain access to their favorite stations.

Since the company appears to be keeping quiet on the precise details for the moment, it’s hard to conclude whether TuneIn went through its entire station list with a fine toothcomb so that only unlicensed channels were blocked, or whether it erred on the side of caution and blocked everything that it couldn’t be sure of.

Presuming the latter is the case (licensing can be difficult to determine), it’s likely that there will be some element of over-blocking and that some channels that shouldn’t have been blocked will now be inaccessible in the UK via TuneIn. This is a particular irritant to listeners of stations that carry no content owned by the labels that brought the lawsuit.

In these cases, interested users can bypass TuneIn altogether by visiting the website associated with the station they were listening to, which tend to have their own embedded audio players. However, if visiting multiple sites is inconvenient, some stations publish a URL that can be opened in software such as VLC or other radio apps such as XiaaLive, which also has its own searchable station catalog.

Some radio station homepages do not clearly publish their stream URLs but by right-clicking the related audio player in Chrome, for example, it’s possible to view the page’s source code which usually contains the URL of the stream when searching for the term ‘http’ or ‘https’.

Experienced users will spot the correct URL quickly but for the less tech-savvy, trial and error or dedicated tools will help. Once a list of URLs is obtained, these can be saved in a VLC playlist, for example, completely negating the need for the TuneIn software.

Blocking the Messenger Not the Message

While TuneIn may have been largely knee-capped in the UK in terms of international stations, the High Court action has done absolutely nothing to prevent the blocked radio stations from transmitting on the Internet. None of them have anything to do with TuneIn itself as they are operated by third-parties.

What the action has achieved, therefore, is to selectively tear up TuneIn’s UK ‘phonebook’. What it hasn’t done is tear up every phonebook available, nor has it taken down a single station indexed by TuneIn, which remain fully operational via their own websites and URLs. It’s a little harder to find them now but hardly a massive undertaking.