On April 17, Jake Paul squared up against MMA veteran Ben Askren, finishing the accomplished wrestler in the first round.

The card was a success but according to Triller, many sites and up to two million people streamed and viewed the event without paying.

In order to make some of these people pay, last week Triller filed a $100m lawsuit in a California court targeting a range of sites and up to 100 John Does.

While tracking down individuals and sites that offered the streams has its complications, vigorous legal action could give Triller opportunities to achieve damages, perhaps in significant amounts. However, the social media platform has now placed another initiative on the table, one that hopes to bring scared pirates out of the shadows.

Streamed the Paul vs Askren Fight Illegally? Pay a Settlement

In a statement published by Reuters, Triller claims that it will be pursuing up to two million people and will press for the maximum possible damages. However, if people step forward and voluntarily pay $49.99 (the original price of the event) before June 1, they can avoid legal action.

“Triller will pursue the full $150,000 penalty per person per instance for anyone who doesn’t do the right thing and pay before the deadline,” said Triller’s head of piracy Matt St. Claire.

“We are taking this position because it is outright theft. It is no different than walking into a store and stealing a video game off the shelf,” he said.

“In the case of the offending sites, it’s worse because they also then resold it to many people, illegally profiting from work they do not own.”

Although no VPN suppliers are currently listed in the company’s lawsuit (an amended complaint was filed last Saturday (pdf) which added the H3 Podcast to the list of defendants), Triller suggests that these could become part of the discovery process and will be forced to hand over their customers’ details.

“VPNs all have to comply and turn over the actual IP addresses of each person who stole the fight in discovery,” St. Claire said.

“We will be able to identify each and every person, VPN or not, as each stream has a unique fingerprint embedded in the content,” he said.

The big question is how much weight Triller’s threats carry.

Intentionally or Not, These Are Mixed Messages

While Triller’s threats seamlessly switch from suppliers of pirated content and those who allegedly consumed it, there are important differences. Courts generally view suppliers of pirated streaming content much more seriously than they do consumers and as far as we’re aware, no one in the United States has ever been ordered to pay damages for simply watching a pirated stream.

Suppliers of illegal streams, on the other hand, have more to worry about. There is little doubt that such suppliers could be on the hook for all kinds of damages if Triller is able to back up its allegations. However, in order to get to the users of those sites, Triller will need to force the sites to hand over their users’ details.

Whether that will be possible remains a big question and whether any information obtained via discovery will prove useful is perhaps an even bigger one. But what about Triller’s claims that VPN users aren’t safe? Again, Triller appears to be muddying the waters quite a bit here by blurring the lines between suppliers of content and consumers of it.

First of all, VPNs can be ordered by a court to hand over their customers’ details but it is not always straightforward. Firstly, all good VPNs carry no logs, meaning that even if a site that streamed the site handed over visitors’ IP addresses, that trail will go immediately cold.

Secondly, many VPN providers use shared IP addresses, meaning that the same IP address will show up in site logs time and time again, since they are being used by hundreds if not thousands of end-users. Since they will all be watching at the same time, pinpointing who did what will be all but impossible.

Of course, it is very likely that some viewers will have used some free VPN app they got from Google Play or elsewhere. If these carry logs, tracking users down could be possible. That being said, the process would not be cheap and it would not be particularly easy, and with two million potential targets (at least according to Triller), the entire legal profession doesn’t have the manpower to deal with them all.

In respect of the unique fingerprints that Triller says it deploys in its streams, they could prove useful but perhaps not in the way Triller seems to claim. The company implies that these could help them identify people who watched the stream, including those who used a VPN, but that deserves some nuance.

What these identifiers can do is help Triller track down people who bought a stream officially and then restreamed it. It could also potentially link those redistributed streams to entities who further restreamed them. As a general rule, however, they won’t be particularly useful in tracking down consumers, VPN or not.

The Settlement Offered By Triller

Anyone spooked by Triller’s warnings can head over to the dedicated page set up by the company and pay a relatively small settlement. It begins by mentioning the lawsuit filed last week and notes that people who “unlawfully viewed or displayed the event but were not otherwise involved in its illegal sale or distribution” can pay $49.99 to obtain a “one-time settlement and release for their unlawful acts.” 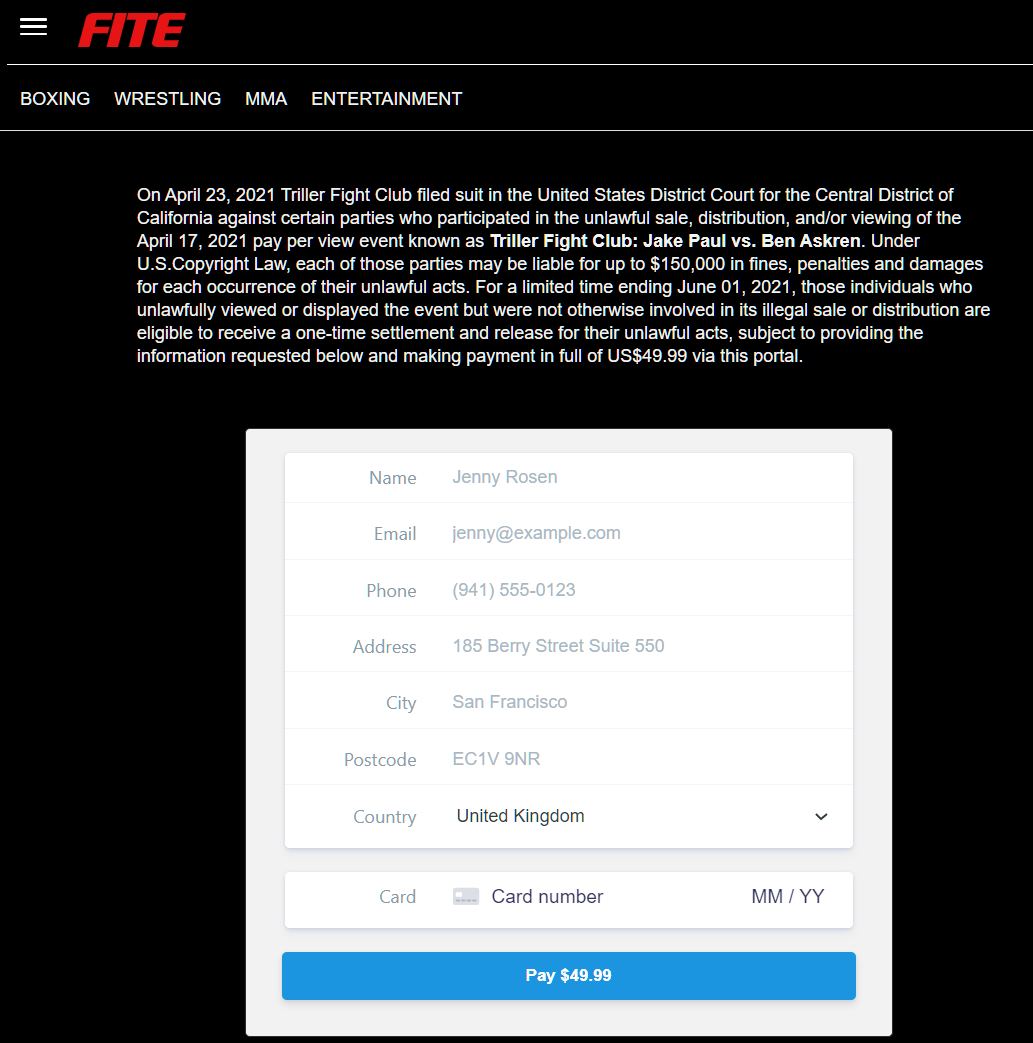 Before entering their names, email addresses, phone numbers, physical addresses, and payment card numbers, those who wish to confess to committing an offense are advised to read four lengthy paragraphs about the settlement and its terms and conditions.

For example, despite apparently clearing the matter with Triller, people who pay the settlement also agree to Triller storing all of the information they provide “in perpetuity”, noting that it may be used and shared as Triller “deem necessary to enforce our rights under applicable law and this settlement and release.” On the other hand, people who settle aren’t permitted to reveal settlement details to anyone, unless required to by law.

Triller also says that after payment, people who settle will be released from the lawsuit it filed last week but, at the time of writing, the people being asked to settle aren’t listed in the lawsuit as defendants. That could change, of course, but there won’t ever be an amended claim listing two million viewers by name.

What Triller appears to be saying here is that if they already knew the identities of the alleged infringers, they would be pursuing them. However, they will take steps to try and find out identities by other means, and potentially pursue them then.

In the meantime, people can come forward and confess, something that will enable Triller to positively identify those people with ease and get paid for the event too.

The big question is whether people who viewed the event illegally are prepared to play the odds of being identified versus a payment of $49.99 which will identify them anyway.