Canadian broadband management company Sandvine has published a new Internet traffic report, zooming in on changes that took place during the Covid-19 pandemic. This reveals some interesting geographical changes. Torrent traffic lost relative market share in some places, but in Europe, the Middle East and Africa, it grew and surpassed Netflix.

The Covid-19 pandemic reshaped society in many ways. This is also noticeable in Internet traffic statistics.

Earlier research has shown that, following lockdown measures, torrent traffic spiked in many countries. However, it was unknown how this surge in usage compared to other traffic patterns.

For over a decade, Sandvine has published data on the relative market share of various services. 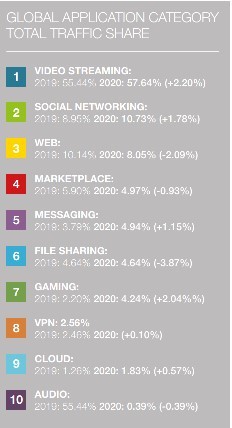 The most recent report reveals some dramatic changes that can largely be attributed to the coronavirus measures.

Globally, video streaming is dominating. YouTube nearly doubled its market share to 15.94%. At the same time, the traffic share of Netflix and BitTorrent went down to 11.42% and 5.23% respectively.

This is relative, so it doesn’t mean that there is less traffic generated by these latter two categories. Absolute traffic has increased across the board, up almost 40% compared to the start of the year, but YouTube simply grew harder.

When we look at the total traffic share per application in various regions, some interesting patterns emerge. Torrent traffic share is not dropping everywhere. On the contrary, it increased its market share in Europe, the Middle East and Africa (EMEA).

In fact, Sandvine’s data show that BitTorrent traffic has outpaced Netflix in the EMEA. It’s now third in line after YouTube and HTTP, with Netflix coming in fourth place.

Both BitTorrent and Netflix increased their traffic share in the EMEA region, but BitTorrent grew faster. 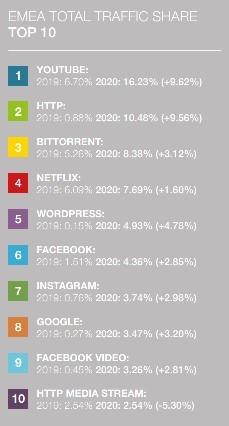 It’s worth noting, however, that Netflix and other streaming services have scaled down their resolution during the pandemic. This means that they would have grown more otherwise.

The overall conclusion from the report is that consumption patterns on the Internet have shifted radically. Video streaming, in particular through YouTube, has a dominating traffic share. BitTorrent traffic, on the other hand, has grown in some regions and dropped in others.