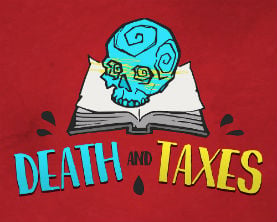 In life, there are few things as certain as death and taxes. For many creators, piracy falls into this category too.

There are multiple ways people can respond to this threat. In Hollywood and the music industry, takedown notices and other anti-piracy efforts are preferred. Others simply do nothing.

There’s also a third option. Over the years a small subset of creators has actively embraced piracy. Not because they don’t want any income. Instead, they see it in part as a promotional vehicle.

This is also the case with Oak, the developer of the game named ‘Death and Taxes.’ The recently released 2D narrative-based game, where people can play the role of Grim Reaper, currently sells for $12.99 on Stream.

At the same time, however, the game is also available for free on many torrent sites. There is an official ‘pirate’ release from the group PLAZA but, in addition to that, the developer also shared his own torrent.

“I’d just like the inevitable release to be on my own terms, meaning that it’s the best possible version, that people can enjoy hassle-free, not a potentially janky release with shitty workarounds or other problems,” Oak from Placeholder Gameworks tells TorrentFreak.

The developer torrents are available on a variety of torrent sites. They come with a special message from Placeholder Gameworks, stating that they are ok with piracy and that they understand that some people can’t afford games, or want to try them before buying.

While major corporations may not understand this move, it makes total sense for the smaller indie developer. A game produced on a small budget can’t afford expensive marketing campaigns. They do want eyeballs, however, and that’s where torrent sites come in.

“It’s super difficult to stand out nowadays, especially for a game that has literally ZERO budget. I can just hope that having a free version out will help the game and its ideas reach a wider community than we would have been otherwise able to connect to.”

In his quest to release the torrent, the developer went a step further than some others. Oak actually reached out directly to some torrent sites, which gladly helped him. This explains why his official release is on a site such as RARBG, which generally isn’t open to public uploads.

“I received assistance from 1337x and RARBG. Both sites’ staffers were super helpful and helped me get up the release within minutes. Mad props to them! I literally couldn’t have done that without them,” Oak tells us, adding that Reddit’s Crackwatch admin team lent a helping hand as well. 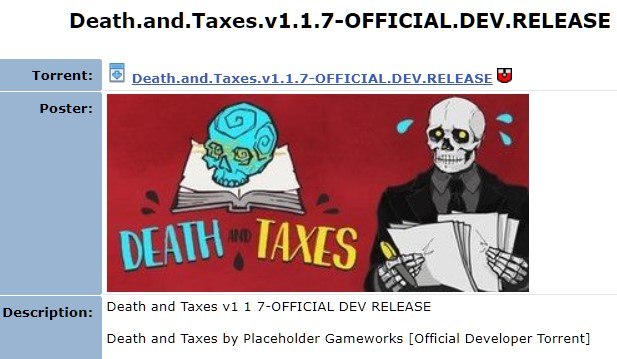 These types of developer-sanctioned releases are not new. Just recently, we highlighted a similar move from the developer of the indie shooter game ‘Danger Gazers,’ who actually noticed a significant boost in sales afterward.

While that can happen, embracing torrent sites is by no means a magical ‘profit boost’ wand. In ‘Danger Gazers’ case, the announcement went viral and it was later picked up in the press, which made it a self-fulfilling prophecy to a certain degree.

Death and Taxes didn’t get this massive external boost and shows a much more natural sales pattern.

These numbers are quite typical for the release of a new game. There certainly no magic boost thanks to piracy, but sales didn’t fall beyond what was expected either. In the broader scheme, however, the developer thinks that the torrent will have a positive effect.

What also plays a role is that the developer used to be a pretty hardcore pirate himself. As a young game fan, he simply couldn’t afford to pay for every release. That said, now that he has the means to do so, Oak is making up for it.

“If I counted the games that I torrented (and edonkeyd/emuled), I would die of old age. I didn’t grow up rich, and could only afford maybe a single game a year,” Oak says.

“I’ve now tried to buy all the games that I had pirated as a kid. Better late than never, right? And having access to that, I got enamored with games and really I generally try to buy everything now, since as a developer I feel honor-bound to buy my colleagues’ works.”

The developer torrent also includes a link to the official Steam release, where people can buy it if they want. Most importantly, however, Oak hopes that people will enjoy the game. Based on the responses thus far, that seems to be the case.

“People like the game, they enjoy what it offers, they seem to really like the art, writing, music and voice acting, which I also think are our strongest aspects. Could have always had better gameplay design, but we had limited time and I think we did pretty well,” Oak says.

‘Death and Taxes’ is available on Steam as well as many torrent sites near you. In the future, the source code will be made public as well.