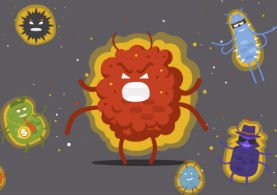 Over the past couple of years the big shift for anti-piracy groups everywhere is to claim that piracy apps are dangerous to users.

According to the MPA, Digital Citizens Alliance, FACT, and countless other entities currently sounding the alarm, letting a piracy-configured device into one’s home is a massive risk to people’s digital wellbeing.

Malware in pirate devices is reportedly watching kids through hijacked cameras, stealing money from bank accounts, infecting home networks, and every other imaginable evil on top.

In the last few days, yet another video appeared, this time warning that devices could bring ‘terrorist’ content into people’s living rooms by offering access to Lebanese satellite channel Al Manar, which is already readily viewable via any web browser.

As highlighted last week, these campaigns are largely unpopular too. Whether people like them or not isn’t even a problem right now because few people are actually watching them. In fact, at the time of writing the new video embedded above has received just 26 views on YouTube despite being online for almost two weeks.

Perhaps more importantly, all of these campaigns (and even some of the studies produced to back them up) are incredibly light on detail. Crucially, none of them make any effort whatsoever to provide specific information on how people can boycott dangerous apps. So, to address this glaring issue, here are some suggestions to bring about real change.

Back in the early 90s, health campaigns to stop young people from taking relatively new ‘designer’ drugs didn’t work. So, when people became ill after taking rogue pills, people who really cared about people’s health stopped preaching and did something about it.

Groups in the Netherlands, for example, set up centers where users could have pills tested and compared with databases of products known to cause harm. This saved lives and made many people think twice about their health, with no threat of arrest.

Like those recreational drug users in the 90s, pirates can be stubborn. Yet, like their thrillseeking counterparts, pirates don’t want their habit to end in misery either. That’s why there is every reason to adopt a similar strategy to tackle the alleged malware crisis in the pirate streaming app scene. It’s a very special opportunity too since it’s incredibly rare for anti-piracy companies and pirates to want the same thing.

So, since there are now many pirate site ‘blacklists’ being compiled around the world to help advertisers protect their customers’ brands from harm by keeping them off pirate sites, why not do something similar to protect users from supposedly-dangerous pirate streaming apps?

There are dozens if not hundreds of pirate streaming apps in the market today and if we take various piracy=malware campaigns at face value, most of them present a serious danger to users.

The proposal is ridiculously simple. Alongside the many investigations underway to shut pirate apps down, which include detailed technical analysis of what apps are doing behind the scenes, why not publish detailed alerts on how these pieces of software can harm current and prospective users?

If advertisers and their clients are worth protecting, the public should be worthy of protection too, surely?

Build and Continually Maintain a Database of Dangerous Apps

Building and publishing such an online database should be extremely easy. And with the assistance of third-party anti-virus partners such as F-Secure and Kaspersky providing verification, warnings can be presented on a dedicated portal to show why these apps should not be installed or used. Or, for the less tech-savvy, why devices containing them should be formatted or disposed of.

The names of the malware-infested pirate apps should be published along with their version numbers, plus the types of malware found in the tools and what they do. Nobody will want their machines infected by these clearly-identified rogue apps and upon reading about the specific dangers, sensible people will delete them and tell their friends not to install them either.

That’s an anti-piracy strategy that even pirates can get behind. When was a sentence like that ever committed to print?

Publicity Won’t Be Hard to Come By

Backed up by hard evidence, getting the message out there that popular pirate apps are dangerous won’t be a problem. Dozens of tech-focused publications (including this one) will be happy to publish the news thereby reaching a very wide audience which includes potential and current pirates.

As long as the malware reports are backed up by at least two credible anti-virus companies that also indicate from where the infected apps were obtained and whether the detection was a one-off or endemic to a specific app, people can make truly informed decisions to stay away from dangerous software. There could also be advice on how to install security software on devices to keep people safe from these threats.

Which is the stated purpose of these advisory campaigns, is it not?

Judging by the amount of anti-piracy campaigns currently majoring on the malware risk there must already be an absolute mountain of accurate information to kickstart a database without delay. Extrapolating the campaign videos’ narratives, every day without such a public database could represent another day where people are at risk of getting infected, so there’s no time to lose and no time like the present.

Sadly, people should not hold their breath.

Unlikely Any of This is Going To Happen

It’s completely understandable that content creators don’t want their hard work to be spread all over the Internet for free but pretending there is a genuine concern for the welfare of Internet users without providing them with hard and specific evidence isn’t going to cut it.

At no point has any anti-piracy campaign ever named a single live app that is systematically doing anything terrible to users. Some apps might be, of course, but to not inform people when there is clear evidence proving that’s the case is reckless and flies in the face of the ‘concerned parent’ act.

Using a product recall as an example, do companies simply say “Car brakes might fail, everyone stop driving their cars to save lives?” No. They name the manufacturer, the models affected and the course of action to get the repair done while maintaining safety. These announcements are based on specific evidence. The big question, of course, surrounds the quality of evidence being relied upon to declare a malware pandemic in pirate apps.

At this point, therefore, there is a clear requirement to either name and shame dangerous apps, backed up by proper third-party security company evidence, or don’t bother with any more of these campaigns. Because, as they stand today, nobody is watching them, let alone believing them. As a result, these apps (if the claims are true) will continue to do harm to users at the same time as they continue to provide access to pirated content.

That sounds like a lose/lose situation for both users and content companies. And a big win for malicious apps. So who is the winner here and what’s the point of these campaigns again?