The Australian Government recently reported that local piracy rates had been slashed in half over a period of 12 months. While this impressive drop was music to the ears of copyright holders, a closer inspection of the data shows that something is not quite right, or potentially, very wrong.

Australia’s latest online copyright infringement report, released by the Department of Communications in December, suggested that piracy is falling.

The data pointed out that there’s been a steady decrease in the number of people who consume music, movies, and TV shows illegally. This follows a trend that was revealed in earlier reports.

According to the Government, a mere 16% of the population can be classified as pirates. This is a drastic drop compared to last year when a similar study found that 32% obtained content illegally. In 2015, when the first survey was taken, the number was even higher at 43%.

Like many other news outlets, we reported the numbers as they were presented. However, something didn’t feel right. This prompted us to step back and take a closer look at the reported data to see how this unprecedented drop took place.

Specifically, we want to see where this drop comes from and how it can be so massive.

The bar chart below provides a good starting point. It shows what percentage of a particular category of digital content is consumed 100% legally, 100% illegally, or a mix of both. The chart also shows the same data for “any of the four” content categories.

As reported, the bar on the far right shows that, across all categories, only 16% of the respondents consumed content unlawfully in any of the four categories. That is exactly as reported, so that’s good news.

The problem is, however, that this percentage doesn’t make much sense when we look at the individual categories.

Based on the reported sample numbers, the 16% across all categories translates to 314 respondents. In other words, 314 people pirated something from any of the four categories which includes music, games, movies and TV.

However, when we look at the movies category on its own we see that 25% of the respondents consumed movies illegally. Based on the sample size for that category, that translates to 316 respondents.

How can it be that more people consume movies illegally than in the four categories combined, which also includes movies, and thus the same respondents?

Technically this can be chalked up as rounding variance. But even when that’s the case, it seems implausible that every person who pirated something also pirated movies.

That explanation is even more implausible when we look at the exact same data from the year before. That year 32% of the people consumed content from any of the four categories unlawfully (555 respondents). However, less than half of these were also movie pirates (240 respondents).

It seems very unlikely that when in 2018 less than 50% of the self-proclaimed pirates consumed illegal movies, this suddenly went up to 100% in 2019.

We shared our findings with the Australian Government’s Department of Communications and the Arts. Despite several back and forths, they were not able to explain these findings.

In previous years the report also included the raw numbers for all the categories, which could provide more insight. However, the most recent report no longer includes these and the Government informed us that it does not have permission to share the data.

And it doesn’t stop there. The further we delve into the numbers the weirder things get.

For example, there is a similar chart to the one shown earlier but in this instance detailing the consumption of “free” content (e.g. downloading from torrent sites). 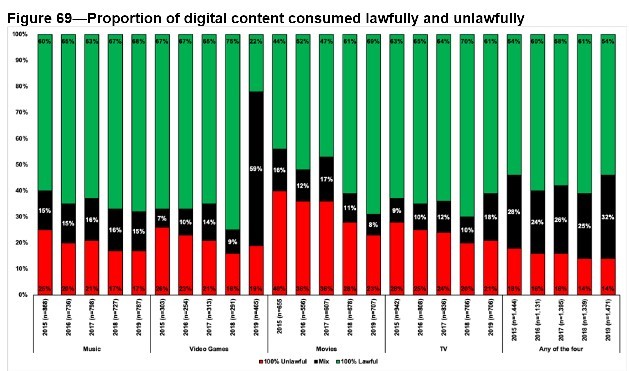 As shown above, this indicates that 46% of all respondents who consumed free content in any of the four categories did so unlawfully.

This translates to roughly 678 respondents, which is much more than the number cited for all content consumers (paid and free), which presumably includes the same people.

There are many other examples to give but the above clearly illustrates that there’s something fishy with these numbers. According to the Government, the entire pirate population was slashed in half last year, but we doubt that this is really the case.