The Pirate Bay has revealed some intriguing statistics on its decentralized archive of data. Over the years more than 6.7 petabytes of data were made available through the site. Less than half of this is still being seeded. The data further reveal that the 2014 raid did some serious damage to the infamous torrent site.

This year, The Pirate Bay will celebrate its 17th anniversary.

That’s quite an achievement for any website but particularly for a pirate site when considering the mounting legal pressures.

Over the years The Pirate Bay has certainly weathered a few storms. There were raids, technical problems, and hosting complications, but the site has always returned. This year it even regained its position as the most popular torrent site of all, after a year of absence from the top spot.

While the infamous torrent site often makes the news, surprisingly little is known about what happens behind the scenes. The site’s operator, who goes by the nickname “Winston,” rarely comments in public. At the start of the new year, however, he made an exception.

For the first time ever, TPB’s operator has publicly shared statistics on how much data are ‘uploaded’ through the site. These files, including movies, software, and music, don’t actually hit its servers. They can be shared through the torrent and magnet links on the site though.

TPB’s operator reveals that, in 2019, the uploaded torrents linked to a massive 776 terabytes of data. More than half of these (405 terabytes) are still actively shared or seeded, as it’s called in BitTorrent terminology.

This is a lot of data, but it’s only a subsection of everything that’s available via The Pirate Bay. In total, more than 6,720 terabytes, or 6.7 petabytes have been ‘uploaded’ to the site. Of this data, over 2.5 petabytes are still being seeded.

The chart below shows how this uploaded data evolved over time. Older content is obviously seeded by fewer people, but that’s not the only thing that stands out. Most visible is the continued increase in uploads between 2004 and 2014, and the significant drop after that. 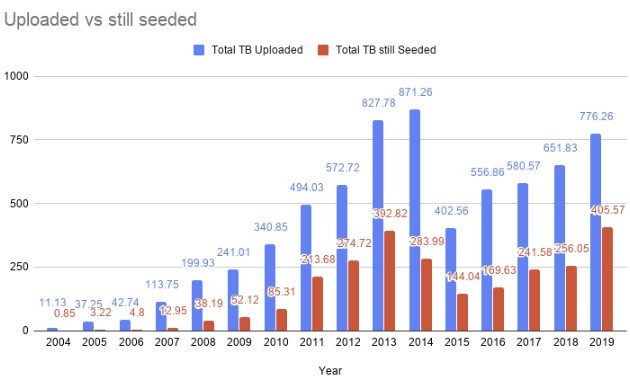 This drop can be explained by The Pirate Bay’s prolonged downtime around the end of 2014 and the start of 2015. Following a raid by the Swedish police, the torrent site remained offline for roughly two months, which substantially hurt the upload numbers.

After the downtime, the ‘uploaded’ data was roughly cut in half. This coincided with a drop in visitor numbers. Even today the site hasn’t fully recovered to the pre-raid numbers, but volumes are increasing year by year.

An archive of more than six petabytes is certainly impressive. According to TPB’s own calculations, it would cost $168,000 to put it all on Amazon’s cheapest 14TB hard drives. It’s certainly not impossible, as the Internet Archive hosts 48 petabytes, but it’s costly.

The Pirate Bay doesn’t have to store much though. All the torrent files combined make up a few gigabytes at most, as the full files are stored and shared by users. While this is cost-effective, it does come at a price.

Since more than half of TPB’s archive is no longer seeded, more than four petabytes of data are not available for download. This may change if people seed again, but the general trend is that availability goes down as time passes.

In order to keep decentralized distribution working, people have to share. TPB’s Winston notes that the ability to share not just files but also costs and resources is BitTorrent’s main advantage.

“This is where bittorent shines, as long as we all keep seeding, especially the rarer and older stuff, one or a few don’t have to take all the cost,” Winston says.

“We all contribute a few cents or dollars per month, on internet connections we already have, and unused storage on our computers, and everyone worldwide can continue to enjoy the torrents for years and decades to come,” he adds, while wishing the site’s users a happy new year.