While the majority of The Pirate Bay users download recent content, there are quite a few older torrents that continue to survive. Today, the oldest of all – an episode from the Swedish comedy series “High Chaparral” – celebrates its sixteenth anniversary. Other older torrents, including a copy of the documentary “Revolution OS” and an album from the Swedish pop group Gyllene Tider, remain active as well.

The Pirate Bay has weathered quite a few storms since its inception.

The notorious torrent site, which is a piracy icon today, was originally founded by Swedish anti-copyright think tank Piratbyrån during the summer of 2003.

In the years that followed, a lot has happened. The site was raided twice, had various changes in ownership, and the original co-founders were sentenced to prison. And in recent years, prolonged downtime issues, as the site currently faces, are the rule rather than the exception.

Despite all these setbacks and challenges, TPB is still here. It remains accessible on the Tor network, where the latest blockbusters, as well as some rare old torrents, remain readily available.

While torrents rely on at least one active seed to keep them alive, some files have proven to be quite resilient. In fact, quite a few torrents are older than some of the site’s younger users.

Today, The Pirate Bay’s oldest active torrent celebrates its sixteenth anniversary. The honor goes to an episode of the Swedish comedy show “High Chaparral,” which was uploaded by ‘kbdcb’ on March 25, 2004. At the time of writing, the file has one seeder according to TPB’s statistics, but various public trackers list more.

The oldest active torrent on TPB 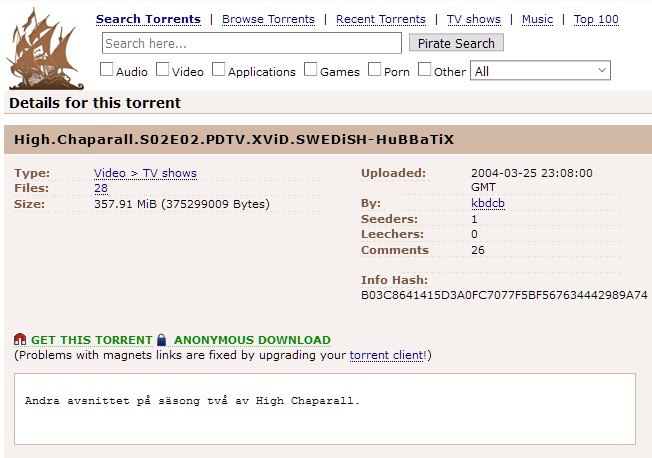 The High Chaparral episode has been marked as the oldest active Pirate Bay torrent for a while. In the video category, it is currently followed by a copy of the 2001 documentary Revolution OS, which still has over a dozen seeders.

Looking at other categories, we see that the oldest active music torrent is an album from the Swedish pop group Gyllene Tider, titled “Samtliga hits!” The oldest game torrent is a copy of the Lord of the Rings strategy game War of the Ring, while a torrent for a really old version of ArcSoft’s photo editing software Funhouse leads the applications category.

If anything, this shows that no matter how much downtime a site like The Pirate Bay suffers, these torrents still survive.

That the High Chaparral episode is the longest surviving torrent on the site is remarkable for another reason as well. A few weeks after the torrent was uploaded, several people complained that they were stuck at 99%, which means that there was no seeder around at the time.

Years later, people started to notice that it had become the oldest torrent on The Pirate Bay, including MasterWAV, who dedicated an entry in his or her diary to this discovery.

“Dear diary, my heart burst of excitement to discover the oldest torrent in The Pirate Bay. I am happy to comment on this book and be part of the history of TPB. It’s like climbing Everest. Sincerely, thanks.”

Other commenters promised to keep seeding the file “forever,” which may be the prime reason why it’s still around today.

While sixteen years is impressive, there are even older torrents available on the Internet. “The Fanimatrix” torrent file holds the all-time record. It was created in September 2013 and, after being previously resurrected, continues to be available today with more than 100 people seeding.