Several large live streaming sites sued by DISH Network for breaching the anti-circumvention provisions of the DMCA have gone dark. SportsBay, the largest of the quartet, had around nine million visitors per month but an order issued by a Texas court requiring third-parties to hand over details of its operator may have set off alarm bells.

Most pirate IPTV services online today operate by accessing official broadcasts and streams, capturing them with dedicated equipment, and then restreaming video to the public from dedicated servers.

However, a US lawsuit filed late July shows that’s not the only way.

In an interesting complaint filed in a Texas court, DISH claimed that four sites doing business as SportsBay.org, SportsBay.tv, Live-NBA.stream, and Freefeds.com were offering sports broadcasts including the Olympics, NBA matches, NFL games, cricket and motorsports, we obtaining its content using a different method.

According to DISH, the SportsBay site operators are able to circumvent the DRM technologies deployed by subsidiary Sling TV’s streaming system in order to provide their users with Sling programming, directly from Sling’s servers, for free. 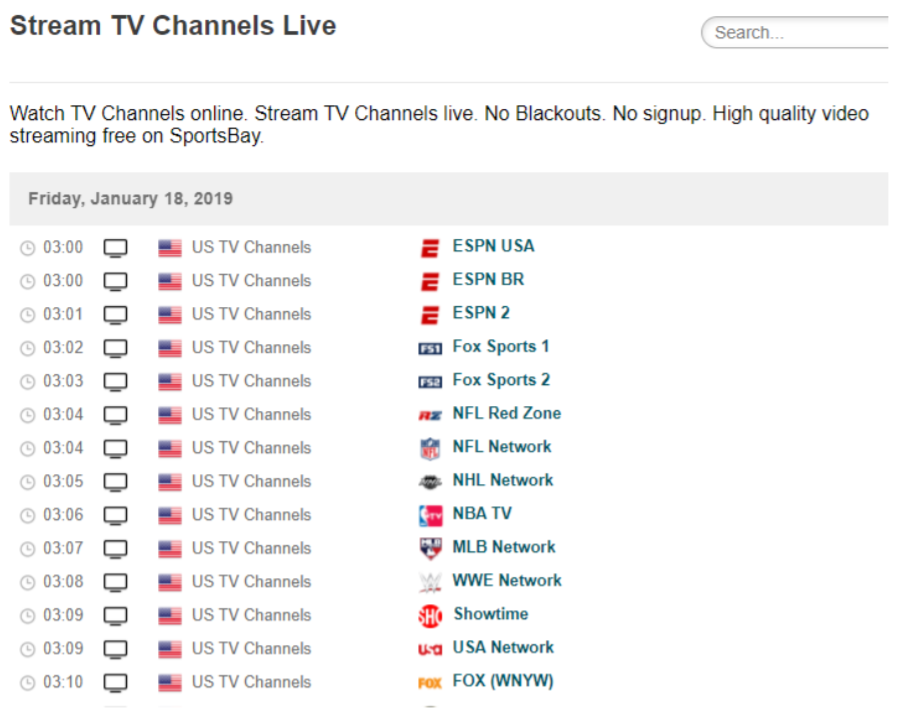 DISH went into some detail on how the operation works while alleging willful violations of the DMCA’s anti-circumvention provisions for which it deserves compensation.

A few days after the complaint was filed, DISH informed the court that the defendants use many third-party service providers to promote, manage, and operate their SportsBay sites. These include domain registrar Namecheap and WhoisGuard, Tucows, Cloudflare, Digital Ocean, Google, Facebook and Twitter.

Since the identities of the SportsBay sites’ operators are unknown to DISH, the company asked permission to subpoena these companies to find out their true identities.

“These service providers are expected to have information that identifies the Defendants — those responsible for operating the Sportsbay Websites, circumventing and providing technologies and services that circumvent the security measures employed by Sling and provide DISH’s copyrighted television programming to Sportsbay users without authorization — and are thus the intended recipients of Plaintiffs’ subpoenas,” DISH told the court.

In an order handed down earlier this month, Judge Charles Eskridge at the District Court for the Southern District of Texas granted DISH’s request to serve subpoenas on the third-party service providers to obtain the identities of the SportsBay sites’ operators. The order also allowed DISH to serve subpoenas on other providers not listed in its earlier discovery motion.

According to a status report filed this week, DISH reports that it filed seven subpoenas to the defendants’ service providers in early September, seeking relevant documents that identify the SportsBay operators. At the time of writing, ‘most’ of the third-party companies have yet to respond to the DISH subpoenas.

This means that DISH still doesn’t know the defendants’ names, they have necessarily not been served, and none have responded to the lawsuit filed in the summer. At this stage DISH hopes to be able to amend its complaint with real names shortly but will probably need to file a request for an extension of time in order to properly serve the defendants.

In the meantime, however, the SportsBay sites have disappeared.

It’s unclear whether the downtime at all four of the ‘SportsBay’ platforms is directly linked to the DISH lawsuit but it’s certainly possible that the serving of the DISH subpoenas has caused some level of concern at the pirate sites.

There may also be some kind of unexpected technical issue but that seems less likely since other sites that appear to be using the same underlying infrastructure appear to be operating normally.

In any event, the sudden disappearance means that huge numbers of SportsBay users are now faced with the prospect of finding an alternative. There’s certainly no shortage of replacements but with around nine million monthly visits, it’s safe to say that some disruption may be felt in live sports streaming, at least for a short while.

DISH’s motion for discovery, the court’s order, and DISH’s status report can be found here (1,2,3) pdf