The World Trade Organization has found that Saudi Arabia failed to live up to its obligations under the TRIPS agreement. In a dispute that centers around the pirate broadcaster beoutQ, the WTO sides with Qatar which suggested that a large piracy conspiracy may have taken place within its neighboring country. 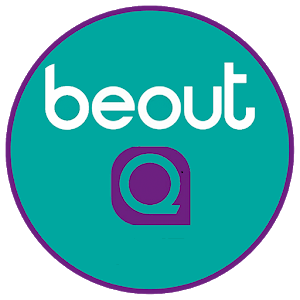 Pay-TV provider BeoutQ is a thorn in the side of many rightsholders. It launched in 2017 and since then, various parties have tried to stop its infringing activities.

The complaints mainly come from broadcasters such as beIN and sports organizations including FIFA, Premier League, NBA, NFL, and even the International Olympic Committee. As a result, it has been labeled a “notorious market” by the US Trade Representative.

BeoutQ is widely regarded to be a Saudi Arabian operation but despite complaints from the highest political echelons, the Kingdom of Saudi Arabia is not eager to take action.

This resulted in a complaint at the World Trade Organization (WTO), filed by Qatar, its neighboring country. Qatar has a stake in the matter since BeoutQ simulcasts programming from the Qatari broadcaster beIN Sports.

According to the complaint, Saudi Arabia isn’t living up to its obligations under the WTO’s TRIPS agreement. According to Qatar, the country failed to cooperate in efforts to shut down the infringing activity, through criminal investigations and other means.

A WTO panel reviewed the dispute and yesterday released a report in which it clearly sides with Qatar. The report concludes that BeoutQ is a piracy service and Saudi Arabia failed to live up to its TRIPS obligations.

The panel highlights that BeoutQ does indeed provide illegal access to beIN channels. In addition, its set-top boxes come pre-loaded with IPTV and various apps that link to other pirated content. This includes the Showbox app, which can be used to access thousands of pirated movies and TV-shows.

“The Show Box application, which has come to be known as the ‘Netflix of piracy’, provides free access to more than 4,700 movies, 700 TV-shows and 35,000 TV-show episodes via streaming or direct download to the STB,” the report reads.

Unlike some apps and services, the ‘pirate’ broadcaster isn’t run by a few hobbyists. The panel’s report points out that the service was promoted on Twitter by prominent Saudi nationals including the counsel for the Saudi Royal Courts, the general manager of the Al Riyadh Newspaper, as well as the Al Riyadh newspaper itself.

According to beIN, these tweets may point to a “conspiracy” to pirate beIN’s content that occurred within “the territorial jurisdiction of Saudi Arabia.” 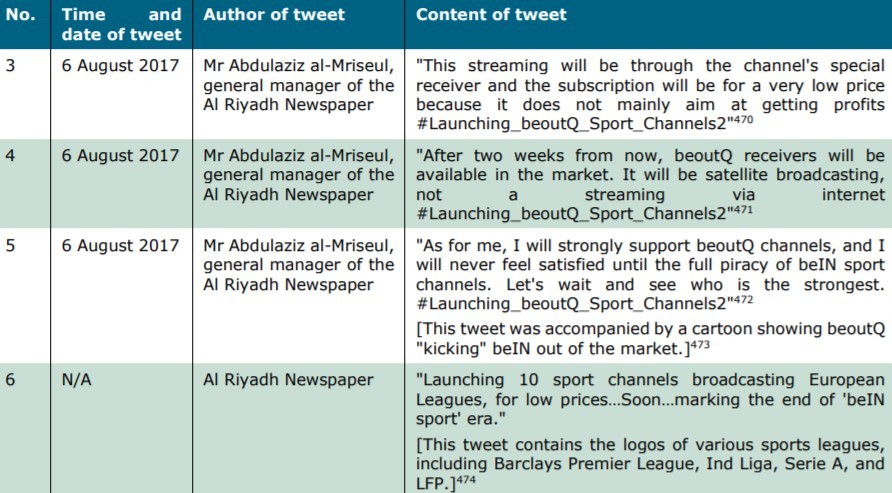 The WTO report doesn’t confirm any conspiracy but notes that the tweets make it clear that these people were aware of a new pirate service, just before BeoutQ launched.

“All of the tweets above foreshadow that a substitute for beIN’s operations would enter the Saudi market, and some of the tweets support the establishment of a pirate channel, beoutQ, to circumvent beIN’s exclusive licences from third-party right holders.”

Ultimately, the WTO’s task wasn’t to rule on who’s responsible for the infringing activity. Instead, it was required to evaluate whether Saudi Arabia had lived up to its obligations under the TRIPS agreement, which requires countries to help solve intellectual property disputes.

Saudi Arabia Failed to Live Up to its Obligations

According to the WTO panel, Saudi Arabia failed to do so in this case.

“Saudi Arabia has taken measures that, directly or indirectly, have had the result of preventing beIN from obtaining Saudi legal counsel to enforce its IP rights through civil enforcement procedures before Saudi courts and tribunals,” the WTO’s conclusion reads.

“Qatar has established that Saudi Arabia has not provided for criminal procedures and penalties to be applied to beoutQ despite the evidence establishing prima facie that beoutQ is operated by individuals or entities under the jurisdiction of Saudi Arabia.”

Based on the above, the WTO urges Saudi Arabia to up its game in order to fully comply with all obligations under the TRIPS Agreement. Meanwhile, however, beoutQ broadcasts continue undeterred.