Popular mixtape platform Spinrilla has failed in its legal quest to hold the RIAA liable for willingly sending inaccurate takedown notices after a federal court in Georgia dismissed the case. While the notices may have been false, Spinrilla has no grounds to request damages as the service didn’t remove or disable any files.

The mixtape platform said the RIAA was using automated text-based searches instead of actually listening to tracks. As a result, the group allegedly reported non-infringing content. These inaccurate notices put Spinrilla users at risk of having their accounts terminated.

The RIAA swiftly responded to these allegations, assuring the court that it had the best intentions. The example of a ‘faulty’ takedown notice Spinrilla listed in the complaint was a legitimate claim and was sent in good faith, it countered.

On top of that, the music group said that Spinrilla had no case because the alleged DMCA abuse would only be relevant if the site removed the contested music track. That didn’t happen, as Spinrilla refused to take action. As such, the RIAA asked the court to dismiss the case.

Spinrilla disagreed and countered that RIAA’s interpretation of the DMCA is too narrow. The site doesn’t believe that content has to be removed to suffer damages. And even if that is the case, Spinrilla would like an injunction to prevent future false takedown notices.

After hearing the arguments from both sides, US District Court Amy Totenberg ruled on the motion to dismiss this week. Without determining if the RIAA’s takedown notices were accurate or not, the Judge sided with the music industry group.

Based on earlier jurisprudence, it is clear that to argue takedown notice abuse and a violation of the DMCA’s ‘Section 512(f)’, Spinrilla has to show that it either ‘removed’ or ‘disabled’ the content in response.

Put simply, someone can’t argue that a copyright holder sent false, abusive, or deceptive DMCA takedown notices if the content isn’t taken down.

Nothing Was Taken Down

In this case, Spinrilla complained about takedown notices the RIAA sent in 2019 and 2020. It specifically references one ‘non-infringing’ audio file which the group falsely asked to remove. However, the site never removed this file.

“Rather, Spinrilla alleges it has been forced to spend time looking into each of the numerous takedown notices, resulting in ‘lost revenue’ and damage to its reputation and goodwill. These are not the types of damages recoverable under Section 512(f).”

The Judge says that even if the RIAA willingly requested the takedown of a non-infringing file, Spinrilla can’t claim damages. To do so, the file had to be removed or disabled.

“Spinrilla has failed to allege it took any of the actions involving removing or disabling access to the material required under Section 512(f) as necessary to state a claim under the DMCA for material misrepresentation and damages.”

Based on the above, Judge Totenberg sees no other option than to grant the RIAA’s motion for dismissal and to close the case. 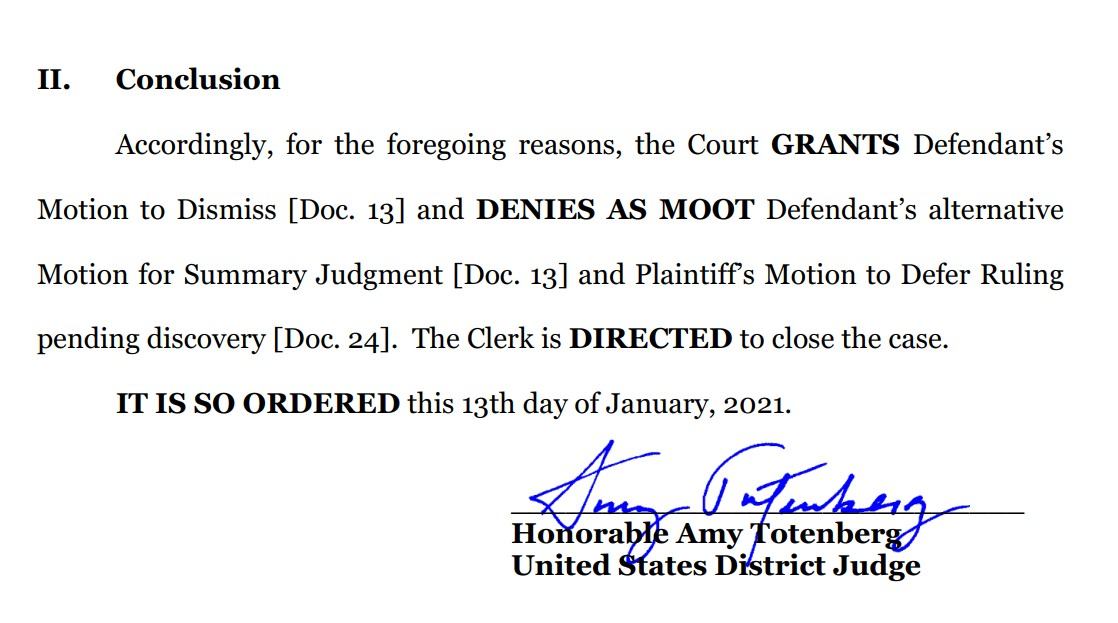 This is another victory for the RIAA, whose notices came under the scrutiny of various parties last year. Earlier this month ISP Bright House Networks lost a similar case over ‘false’ takedown notices, and last November the court dismissed Charter’s takedown abuse claims as well.

The ISPs and Spinrilla are all engaged in separate legal battles against the RIAA and/or its members, which sued the companies for failing to terminate repeat infringers. Those cases remain ongoing.