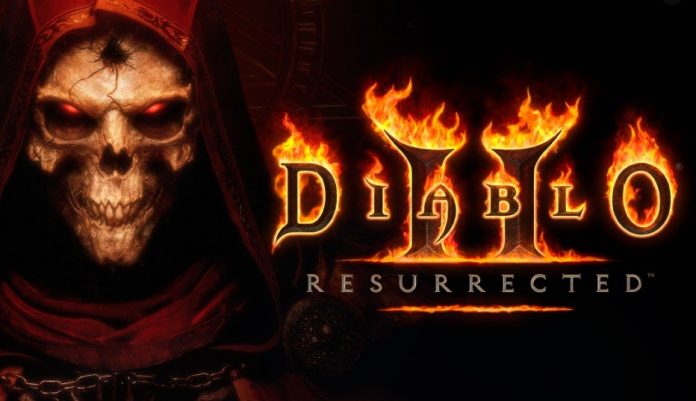 
Blizzard Entertainment is continuing its quest to wipe offline patches for the upcoming “Diablo II: Resurrected” game off the Internet. After targeting the main developer with a cease and desist order, the game company has now asked GitHub to remove dozens of forks that were still floating around. 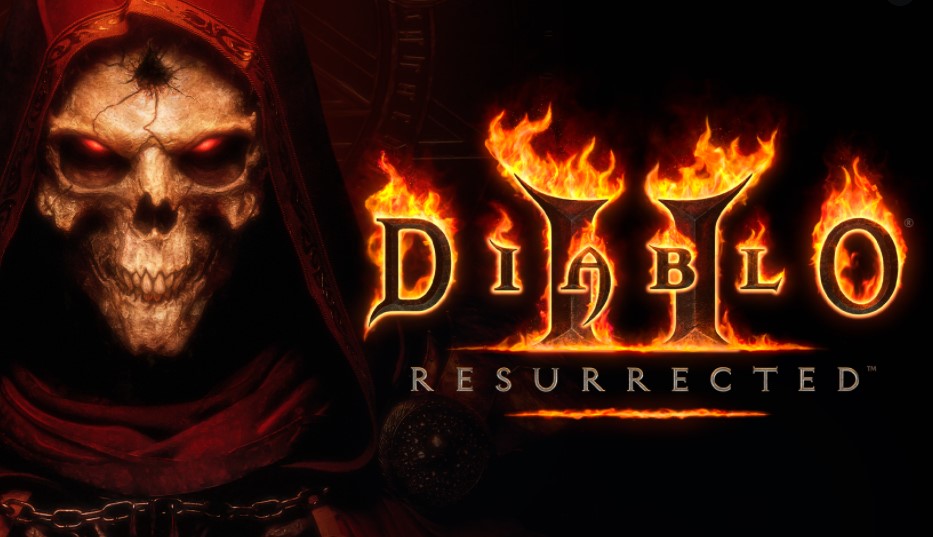 Over the years, video game developer Blizzard has published many popular game titles that have entertained millions of people.

Later this year the company is expected to releases a remaster of Diablo II, the iconic game that was first released more than two decades ago.

In April, the first preview of ‘Diablo II: Resurrected’ came out, which was well received. A few fans are enjoying it enough to want to play the game without an Internet connection, something that they could easily do with the original Diablo II.

However, times have changed. As with many other games that are published nowadays, ‘Diablo II: Resurrected’ comes with advanced copy protection that prevents users from tinkering with the files. This is a challenge, but one that’s not impossible to overcome.

Last month developer Ferib Hellscream released an offline patch for the game, which was based on a similar anti-tampering bypass the same developer released for World of Warcraft a year earlier. This ‘D2ROffline’ patch also made it possible for people to play the game without an official invite for the alpha release. 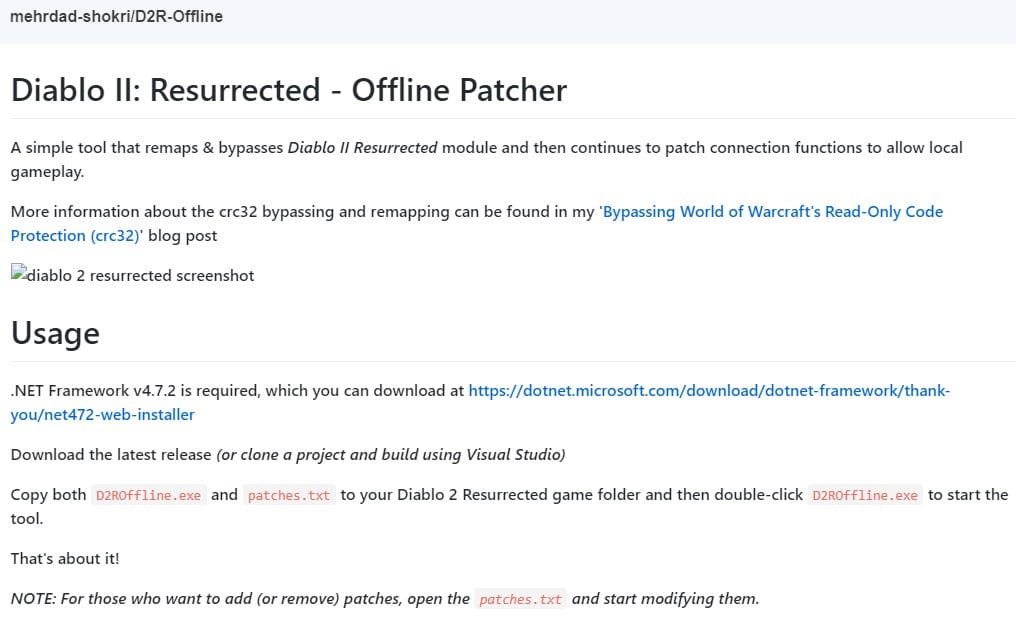 Blizzard wasn’t happy with this patch, as Kotaku mentioned last month. The game publisher sent a cease and desist letter, urging Ferib to remove the code from GitHub and take it off his own site as well.

Ferib swiftly complied and also took down a blog post where he explained how the project came about. The older post on the World of Warcraft bypass was deleted as well and the developer also removed some YouTube videos on the subject.

However, permanently removing something from the Internet is easier said than done. The deleted blog posts live on at Archive.org and the D2ROffline code remained widely available as it was forked dozens of times on GitHub.

This prompted Blizzard to take action yet again. Hoping to finally quash the code, it has now targeted forked patches posted on GitHub by sending a DMCA takedown notice.

“The project at issue is designed to circumvent Blizzard’s technological protection measures by allowing for the bypassing of the CRC32 integrity checks. These integrity checks are there to scan memory regions of the game in order to check whether the code for the game has been modified before it is executed/ran,” Blizzard explained.

While the D2ROffline code itself is not copyright infringing, Blizzard believes that it circumvents access control protections, which violates Section 1201 of the DMCA. It has therefore asked GitHub to remove the code.

“The repository itself has been removed following Blizzard’s demand to the infringer that it be removed. However, Blizzard urgently needs the forks above removed as well, as the content contained therein is causing harm to Blizzard,” the company writes.

And so it happened. A few hours ago GitHub published the DMCA notice and removed all mentioned forks.

Before taking action, GitHub says it offered to connect the owners of some or all of the affected repositories to legal resources if they wished to object.

This is in line with a promise GitHub made earlier, where it committed to protecting developers’ freedoms to tinker with software, while putting $1 million into a takedown defense fund.

TorrentFreak spoke to ‘Mike’ the owner of one of the forks that were removed yesterday. He informed us that GitHub sent a notice pretty much at the same time as the repo was removed. 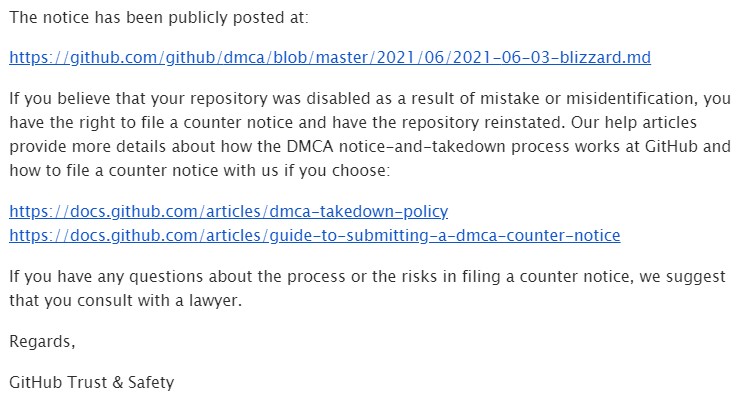 As can be seen above, GitHub’s email doesn’t mention the legal defense fund directly. That may be different for other developers. The email does mention the option of filing a DMCA counter-notice.

“If you believe that your repository was disabled as a result of mistake or misidentification, you have the right to file a counter notice and have the repository reinstated,” GitHub wrote.

Mike tells us that he doesn’t plan on filing a counter-notice. However, he doesn’t believe that Blizzard’s takedown notice will be very effective. There are still plenty of copies around and putting the genie back in the bottle is near-impossible.