The company’s open and casual image is generally well appreciated. However, Mindgeek and its many daughter companies also have another side. They tend to be very protective of their copyrights.

Mindgeek subsidiary MG Premium, for example, has more than 10,000 works registered at the US copyright office. To prevent these from being shared without permission, the company has sent over a quarter billion takedown requests to Google alone.

More recently, Pornhub’s sister company expanded its copyright enforcement efforts in another area. In addition to sending takedown notices, it also started going after people who allegedly shared its videos through BitTorrent.

This campaign was recently highlighted by Swedish Internet provider Bahnhof, which keeps a close eye on copyright trolling efforts in the Scandinavian country.

A search through public Swedish court records reveals that MG Premium obtained eight applications to identify the account holders behind 16,594 IP-addresses. The company uses this information to approach these alleged pirates with a settlement offer. 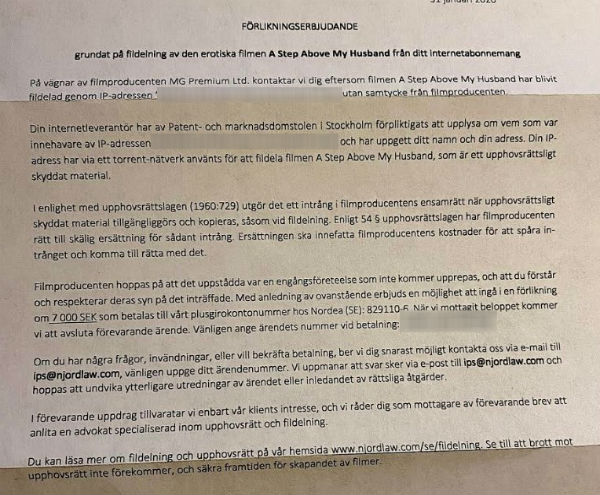 While some may have indeed shared the infringing content, the letters also target people who are not directly involved. After all, Internet connections are often shared with other members of a household or are open to the public at large.

Bahnhof, which is one of the few ISPs that doesn’t share the personal information of its customers, sees the practice as blackmail. It believes that the company chooses this tactic to generate some extra profits.

Mindgeek, for its part, says that the Swedish legal campaign is intended to help reduce piracy. The initiative just started and the company will evaluate the results in the near future to see what steps it will take next.

“MindGeek, through its exclusive content subsidiary MG Premium, seeks to protect thousands of its copyrighted audiovisual works from blatant infringement. MG Premium is constantly testing and evaluating methods of reducing the extent to which its works are pirated,” Mindgeek’s Michael Willis says.

“At different times, these methods can result in targeting website operators, vendors supporting such operators, and in certain cases, end users who are taking advantage of, or sharing pirated works,” he adds.

The initiative in Sweden is similarly intended to help reduce piracy. It is very recent, and thus not necessarily an integrated or long term strategy. The results will be evaluated in the coming months, which will help determine the next course of action.

It is worth noting that Mindgeek’s empire is broader than adult sites alone. The company has dozens of subsidiaries, including AppAtomic, which is the driving force behind the VPN service VPNHub.

VPNHub, like many other VPN services, doesn’t keep any logs of IP-address assignments. Ironically, this means that MG Premium has no means to identify pirates who use the service. Then again, Mindgeek wins either way, as the VPN business can be quite lucrative too.