Italy’s Guardia di Finanza says it has carried out a “preventative seizure” of a pirate IPTV platform serving in excess of 50,000 users. The action follows an investigation by Sky and football league Serie A. According to reports, the authorities are now working to identify the platform’s subscribers.

While rightsholders and authorities all around the world are working to disrupt pirate IPTV platforms, in 2020 Italian law enforcement entities have been more involved than most.

Every few weeks agencies including the Guardia di Finanza have announced fresh action to try and reduce the use of piracy-enabled set-top devices, often referred to by the term ‘pezzotto’.

According to an announcement by the Provincial Command of the Guardia di Finanza of Milan, an operation coordinated by the Public Prosecutor of Milan has resulted in the “preventative seizure” of an IPTV platform through which more than 50,000 users were accessing TV content without permission.

The name of the platform hasn’t been directly released by the authorities but a video claiming to show aspects of ‘Operation: The Net’ shows the URL Webnet.cam (currently down) apparently involved in IPTV.

Considering sports broadcasters are some of the entertainment companies hardest hit by the proliferation of piracy-enabled devices, it is no surprise that the action follows preliminary investigations carried out by Sky Italia and football league Serie A.

These entities filed complaints with the authorities, triggering an investigation by the Milan Economic-Financial Police Unit and the Computer Crimes Team of the local Public Prosecutor’s Office.

“Subsequent investigations revealed the existence of an interconnected organization, operating in different regions of the national territory, dedicated to the sale and distribution of decoding devices suitable for allowing access to the IPTV encrypted service to enjoy television content, without payment of the applicable fees,” GdF’s statement reads. 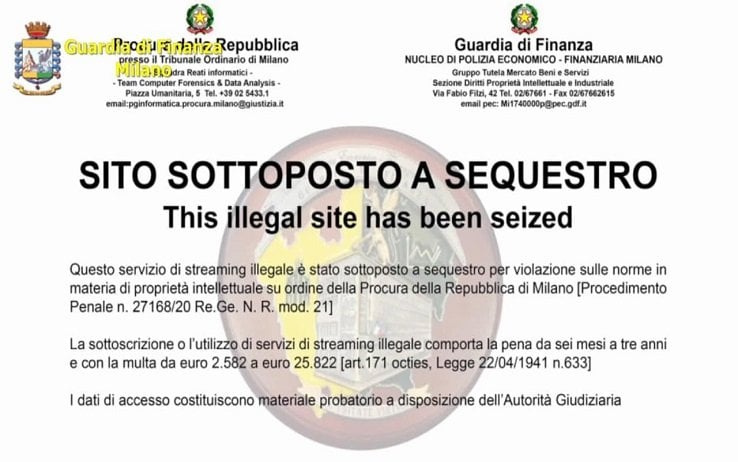 According to the law enforcement entity, the investigation against the platform was made more complex due to the suspects’ use of VPNs to “anonymize communications”.

Nevertheless, three individuals have now been reported to the prosecutor’s office for breaches of Art. 171 of Italy’s Copyright Law, which for criminal infringements can mean fines and/or imprisonment.

“We are extremely satisfied with the results we are achieving in synergy with the Public Prosecutor’s Office in the field of combating audiovisual piracy. The work carried out has completed an operation of great importance,” says Serie A CEO Luigi De Siervo.

According to Siervo, after identifying those at the top of the “criminal organization” with the assistance of anti-piracy company Digital Content Protection, attention is now being turned to the people who subscribed to the illegal service.

“It is a further step forward in our daily battle because thanks to the seizure of the database of these criminals, the final users are being identified who will, in turn, be reported and prosecuted with penalties ranging from 2,500 to 25,000 euros,” the Serie A chief warned.

Whether this threat will be carried out at scale will remain to be seen but Italy has already shown a willingness this year to go after pirate IPTV subscribers. In February, the Guardia di Finanza said it had reported 223 subscribers of pirate IPTV services to the judicial authorities.

This latest operation against the 50,000-subscriber platform follows on the heels of two others involving Italian authorities in recent months.

In September, the Guardia di Finanza said that 58 sites and 18 Telegram channels had been blocked for their involvement in pirate IPTV. Then last month, a massive law enforcement operation (“The Perfect Storm”) carried out across Europe reportedly shut down 5,500 servers used to stream pirated TV broadcasts, live sports, and movies to the public.