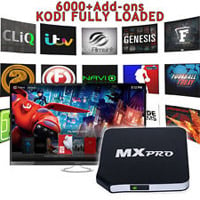 Pirate TV Box & Kodi Wizard Seller Who Made £2.3m Gets 30 Months in Prison


A UK man who generated more than £2.3 million selling piracy-configured Android devices has been sentenced to 30 months in prison. More than eight years ago and over the space of just a few months, Halton Powell’s ‘Droidsticks’ brand and associated Kodi add-on package were known all over the UK. After ignoring many obvious warnings, his eventual arrest was no surprise.

Starting in the early part of the last decade, large numbers of technically-minded individuals began selling piracy-configured set-top boxes to the public.

Unlike many of their cohorts running torrent and streaming websites, many pirate box sellers conducted business in person and in broad daylight. With few measures in place to reduce the chances of arrest, the most brazen were always likely to be the most vulnerable.

So-called ‘fully-loaded’ Android boxes were openly sold on eBay, Amazon, and other online platforms, while local markets, car boot sales, and dedicated retail units offered a same-day service. By mid-2015 it was common knowledge that the UK’s Police Intellectual Property Unit, Trading Standards, and Sky were teaming up to take sellers down yet a surprising number of sellers carried on regardless.