Millions of people around the world download torrents on a daily basis. While they are familiar with torrent sites and clients, the significance of trackers is rarely considered.

Technically speaking, trackers coordinate the transfers between people. You tell the tracker what parts of a file you need and which ones you have. It then uses this information to connect you to the right peers.

The most-used public trackers are operated independently from torrent sites. They don’t host any files but simply serve as a constantly updating phone book. By doing so, they have a critical role in the ecosystem.

To find out more about what’s involved in operating a site like that we reached out to Bart, the operator of Opentrackr, which is one of the largest open trackers currently active.

Opentrackr was launched in 2015, mostly out of frustration. As other trackers were disappearing – often due to legal pressure – Bart decided to take matters into his own hands. His goal was to start a content-neutral tracker that would adhere to the law.

“I started the tracker in 2015 when I became frustrated by how many torrents no longer contained any working trackers,” Bart tells us.

“I was thinking, why not make a tracker that does try to follow the law to the best of its ability? A tracker that would not need to disappear due to the pressure of copyright holders?”

Not much later, the tracker was online. Like many other torrent trackers, Opentrackr uses the open-source OpenTracker software. This is known to be very efficient and can handle millions of peers without having to invest in expensive resources.

“Surprisingly, it took less equipment than I was originally expecting! The tracker process uses about 6GB of RAM at the moment and more than half of the time the CPU is idle,” Bart says.

To give that some more context, Opentrackr is hosted on a 10-year-old server. A Dell R410, to be precise, which is running two Intel L5640 CPUs.

The hardware requirements may be modest, but the same can’t be said for the bandwidth usage. On a typical day, the tracker consumes four terabytes of bandwidth. This, despite the fact that the majority of the torrent connections use the efficient UDP protocol.

Over the past years, there haven’t been any dramatic changes in the number of users. It appears to be trending up, however. This is also visible on Opentrackr’s public statistics page. 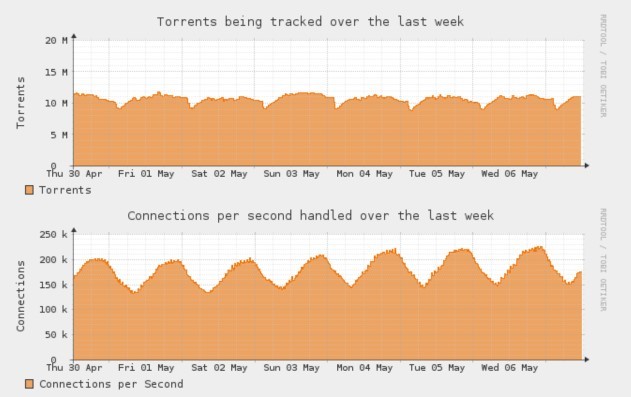 At the moment, the tracker coordinates the traffic of roughly 10 million torrents, 35 million seeders, and 25 million peers. All this traffic is good for roughly 200,000 connections per second, day in and day out.

Bart has no idea who uses the tracker and what they share. However, to avoid legal problems he decided early on to accept takedown requests for hashes. When these are blocked, users can’t share the linked file through the tracker.

Although the tracker doesn’t host anything itself, the operator sees it as a gesture of goodwill. Also, he wouldn’t have the time or money to fight over this in court.

“I decided that accepting takedown requests for hashes of copyrighted works would be the best, this ensures the tracker isn’t likely going to be taken down for anything copyright related. Because of this, I hope and assume OpenTrackr will survive as long as BitTorrent stays relevant,” Bart says.

“But to be honest, I don’t understand why companies bother with it, in a very oversimplified way I am just a phonebook. But instead of people, there are hashes and instead of phone numbers, there are IP addresses.”

In response to notices, Opentrackr has removed a few thousand hashes, as its transparency report shows. That pales in comparison to the millions of torrents that are tracked.

These takedown notices are usually pretty formal, but there are unusual ones as well. That includes a request from an adult content producer, which sent some interesting screenshots of the editing process as proof of ownership.

“I can tell you they were definitely NSFW haha. It was a change from the legal documents or just plain hash lists I usually receive from copyright holders,” Bart notes.

As for the future, Opentrackr plans to keep on operating as long as there’s a need. Technically, decentralized solutions such as DHT and PEX can do roughly the same job. However, trackers are generally faster and more efficient, especially for less popular torrents.

“Its effect on popular torrents is smaller but the peer and seed counts can still function as a popularity indicator. This is a bit harder to collect using DHT. It’s a relatively simple, robust, and efficient protocol,” Bart concludes.

Opentrackr is mostly a hobby project and Bart pays all costs out of his own pocket. However, he launched a Patreon campaign a few months ago in case people want to support the cause.