Namecheap has suspended the domain of file-hosting service Nofile.io. The suspension follows a few weeks after the RIAA targeted the site and it wouldn’t be a surprise if the music group’s inquiry directly or indirectly spurred the domain registrar into action. 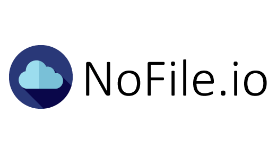 Nofile.io is a popular no-nonsense file-hosting service that’s been around for roughly two years.

Similar to other hosting services, people can use it to upload and share files. However, this week the site has been unreachable.

Upon closer inspection, we found out that the downtime is the result of a domain name issue. It appears that the site’s registrar, Namecheap, has put the Nofile.io domain on “serverHold.”

According to ICANN, the serverHold domain status is uncommon and “usually enacted during legal disputes, non-payment, or when your domain is subject to deletion.”

This status is set by the domain registrar, Namecheap in this case, and informs the registry not to activate the DNS. As a result, the website in question will become inaccessible.

It’s unclear why Namecheap took this action. We reached out to the company earlier this week, but haven’t heard back.

The suspension may be related to an earlier issue. As reported last month, the RIAA obtained a DMCA subpoena ordering Namecheap to hand over the personal details of the owner of the domain name.

“The website associated with this domain name offers files containing sound recordings which are owned by one or more of our member companies and have not been authorized for this kind of use, ” RIAA wrote at the time.

RIAA highlighted that a leaked track by rapper ‘Tyler, the Creator,’ titled ‘Earfquake,’ was shared on the site and requested the personal details of the domain owner from Namecheap.

While the registrar is not known to suspend domains based on these type of allegations, it could be that this inquiry that raised some red flags. For example, it may have revealed that the WHOIS information was false. That can be reason for a suspension.

Last week we reported on a similar issue, where a torrent site lost its domain name due to inaccurate WHOIS data.

Whether something similar happened here remains unconfirmed. However, unless the operator of Nofile.io resolves the matter with Namecheap, the site’s domain name will remain suspended.