PortalRoms, a popular index for ROM and emulators for a wide range of gaming systems, has disappeared without trace. Up until a few days ago the site was servicing more four million visitors per month with links to download content via torrents. However, after domain issues hit the site last October, history may now be repeating itself for the ten-year-old site.

In Internet ‘piracy’ years, PortalRoms.com is pretty old domain, having first appeared as a very basic ROM download site way back in 2004, possibly even earlier.

Over the years it has undergone various transformations and possibly ownership changes too. Its now-dormant Twitter account was created back in 2010 but behind the scenes and after fairly slow initial growth, the last decade saw the site grow negligible traffic to become a decent-sized ROM, retro, and emulator player. 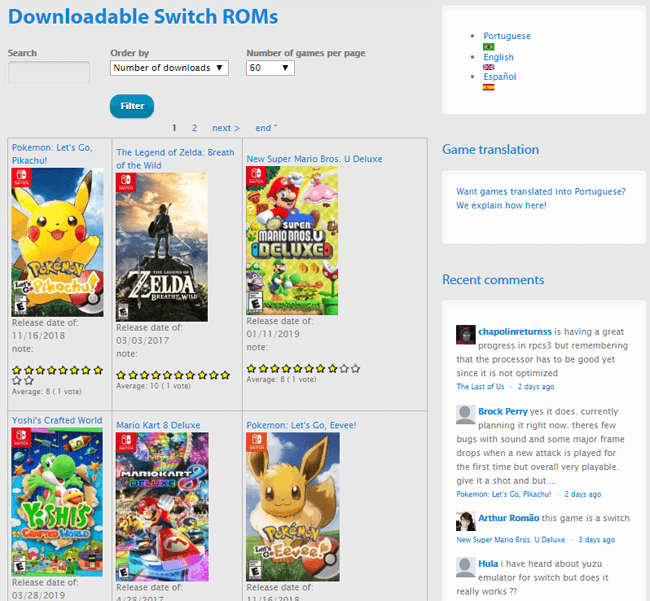 Up until just a few days ago, users of PortalRoms – who between them have been generating around four million visits per month – were able to download ROMs covering everything from arcade games to Dreamcast to Nintendo Switch. Rather than store this content on restrictive file-hosting platforms, PortalRoms created torrents instead, a rare move for a site of this type.

Right from the very beginning, PortalRoms operated from PortalRoms.com. However, for reasons that are not clear, last September or October the site made a surprise switch to the Swiss-based PortalRoms.ch domain. As data from SimilarWeb shows, most traffic managed to transfer to the new domain, with little to no disruption. 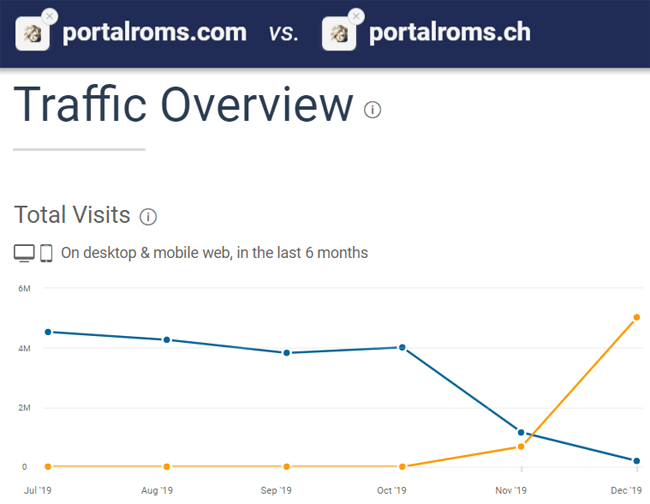 The same cannot be said of the past few days. With no public announcements to indicate the cause, PortalRoms went dark, leaving millions of users (especially in South America where the site was very popular) without their favorite download portal to fall back on.

When trying to determine the cause of the downtime, the site’s domain entries aren’t particularly useful.

TorrentFreak contacted the registrar in control of the .ch domain but the company advised us that the domain is actually controlled by one of their resellers – 1337 Services LLC. This is the business name of Njalla, the domain company connected to Pirate Bay co-founder Peter Sunde, a company that strives to give up no useful information on any domain.

It remains possible that PortalRoms is experiencing yet another bout of domain problems but whether they are copyright-related is open to question. Indeed, one of the curious things about PortalRoms.com and PortalRoms.ch is that considering its extensive library and visitor count, anti-piracy groups working for gaming companies like Nintendo or Sony seem to be pretty disinterested.

Google’s Transparency Report reveals that PortalRoms.com received only 55 complaints targeting 115 URLs when it was in operation. Companies like EA, Rockstar, THQ and Activision got involved but never on any scale. For comparison, the relatively new PortalRoms.ch domain received only four complaints but those contained just over 1,000 URLs. All but a handful were filed by the Entertainment Software Association.

While it remains to be seen whether PortalRoms will ever return, it’s worth noting that its chosen method of content distribution (torrents, in this case) means that people will still be sharing the ROM and emulator files during the downtime. Indeed, a basic search for ‘portalroms’ on various meta-search engines reveals many active torrents with the phrase “visit www.PORTALROMS.ch for more games _.url” in their file lists.