Just over six months ago UK-based anti-piracy company AudioLock announced The Music Mission, a new campaign to disrupt the activities of around 200 pay-piracy sites focused on music.

Unlike torrent or streaming sites, in many cases these platforms seek to emulate specialist legal portals such as Beatport, Traxsource and Juno, by offering the same tracks in similar polished interfaces. As a result, these paysites represent a more direct threat, since instead of attracting pirates who won’t pay, they attract customers who will.

In this respect, it is believed that pirated downloads of this type are more likely to represent a lost sale. Indeed, investigations carried out by The Music Mission found that these sites were attracting significantly more traffic than their legal counterparts.

Headed by AudioLock and backed by music distributor Label Worx plus 800 additional supporters made up of labels and distributor platforms, The Music Mission has deployed a number of techniques to disrupt these pirate sites.

In November, for example, AudioLock CEO Ben Rush informed TorrentFreak that with the assistance of Traxsource, Beatport, Juno and Soundcloud, work was undertaken to remove API access from the targeted sites, with ongoing monitoring to ensure others didn’t take up the slack.

According to Rush, additional pressure placed on the sites (which included a search engine delisting campaign that removed close to 950,000 links in the early stages) meant that 61 domains offering music disappeared or suddenly began directing to non-music sites.

Others began to display fake error messages indicating they were down, while attempting to continue their business behind the scenes, but these weren’t missed by AudioLock.

One of the early signs that the campaign was having a positive effect on sales was that older music, some of it released around four years ago, was beginning to reappear in the dance music charts, Rush explains.

“The most startling discovery has been content from as early as 2016 either recharting or more surprisingly charting for the first time during the period of the two phases of delisting carried out for the content being protected,” AudioLock’s CEO says.

“We think that it is possible there could be a lift on other releases at the same time as those protected by The Music Mission due to the legitimate stores being raised up in search, with many now in the first few results. This would, of course, increase traffic and thus music discovery and sales.”

Results After The Completion of Stage One

In an announcement this morning, AudioLock revealed additional details on the campaign and its achievements over the past several months. In total, 150,800 releases consisting of more than 0.5m tracks from 2,723 record labels were provided with protection.

After identifying and investigating more than 260 ‘pirate’ domains, connections between the sites, their owners, the content being made available, and supporting services (including hosting) were established.

As part of the project, AudioLock also sent requests to Google to delist 2.6 million URLs after crawling 20.4 million pages on the pirate download stores. The evidence data and audit logs for these links alone used a total of 2.8TB of storage.

At the time of writing, AudioLock says that 136 of the targeted domains are no longer acting as pirate download stores, taking access to 50TB of music with them. On top, 20 site operators have reportedly been identified.

According to data released by AudioLock, The Music Mission project has achieved some interesting results in respect of how long new tracks stay popular with fans.

This is reflected in the length of time the tracks remain in the global Top 100 dance music charts, with an average time of 26 days in September now boosted to more than 70 days for tracks protected during the campaign. 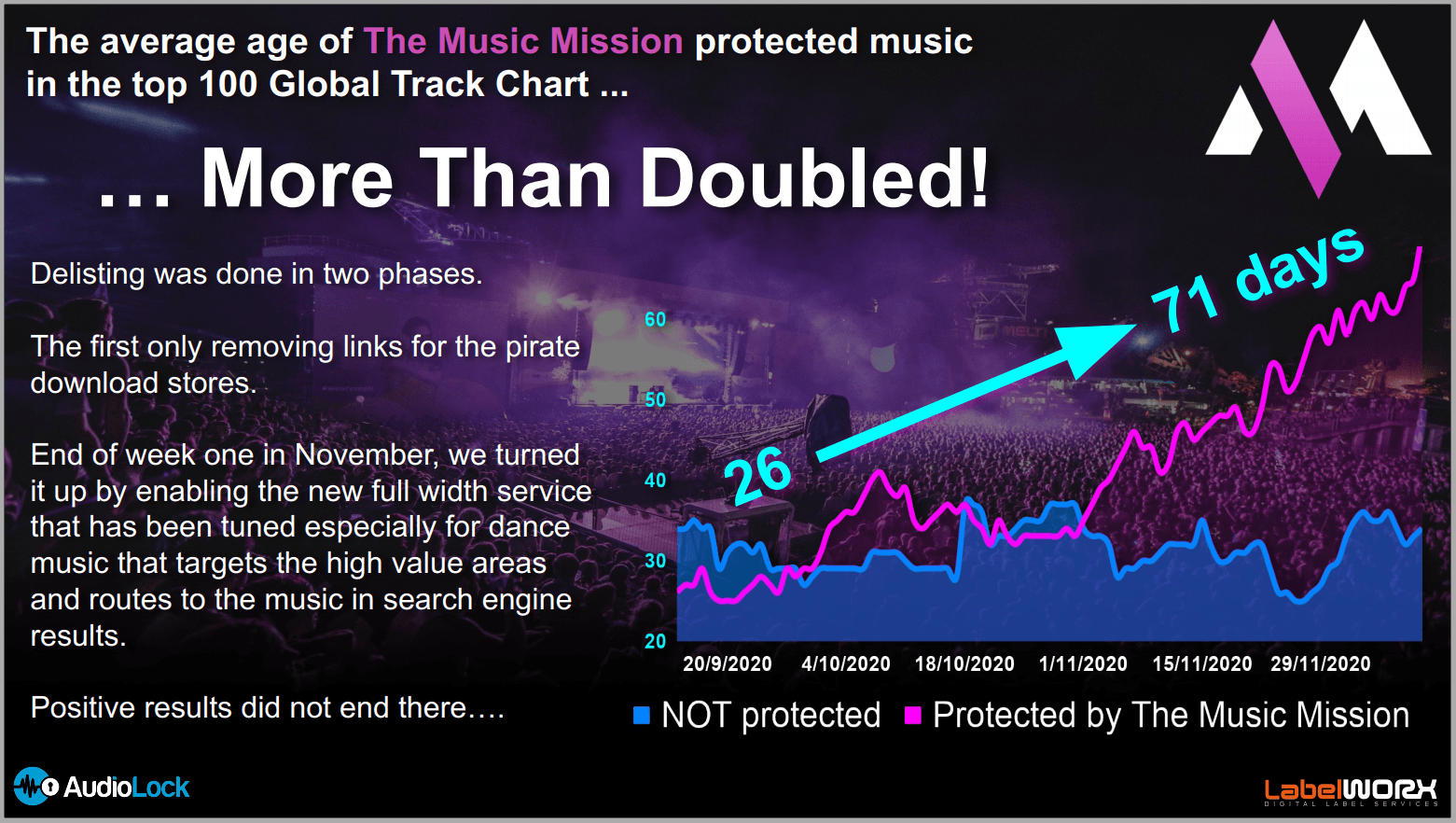 Data from the project suggests that tracks appearing in the top 10 best-selling releases initially comprised of around 30% protected by The Music Mission (TMM) but two weeks after the second phase of delistings, 80% of the tracks in the top 10 were covered by the project, with the majority appearing at the top of the charts.

A similar effect was also observed with older tracks in the Top 100 charts across other genres.

“Ordering the Global Top 100 Track chart by the age of the track showed that the density of TMM protected music reached 60% in the top 10 having started at just 10%. This shows that tracks are not only lasting considerably longer in the chart, but also from the TMM protection work, have grown to account for the majority of the oldest out of the whole top 100, benefiting from receiving that all-important increase in exposure to users,” the project announced today.

The Future of The Music Mission

Speaking with TorrentFreak, Ben Rush says that collaboration from the campaign’s supporters was the key to making the takedowns possible, something that will benefit the entire industry moving forward by making revenues from downloading a significant contributor to labels’ revenue.

“The work was focused on the pirate download stores however this is only one part of the pirate landscape,” he continues.

“For example, for dance music there are a great many DJ promo sites operating unlicensed yet charge subscriptions and for the wider industry, stream-ripping/click scam sites too, the latter we targeted through the delisting.

“We have early indications that stream plays have also seen growth, benefiting from The Music Mission which we are currently investigating further. There is clearly a lot more that can still be done here which benefits the industry as a whole, not just the dance music side.”

While the results of the campaign are certainly interesting, where the project will go from here remains unclear. Thus far, all work has been carried out by AudioLock at the company’s expense so although there appears to be a benefit to artists, labels, and distributors in terms of sales, outside funding will probably be needed if the intensity is to be maintained.