The MPA, MPA-Canada, and Amazon have filed a request with Github requesting that a Kodi add-on developer’s account be deleted from the platform. Citing a copyright case and a permanent injunction handed down by Canada’s Federal Court, the content companies claim that the account is still being used to infringe their rights. Github has left the account intact, however.

Following a massive surge in interest over the past several years, Kodi remains the platform of choice for millions of people looking to access movies and TV shows for free.

In its standard form, the Kodi software is entirely legal but when augmented with third-party add-ons, it turns into a piracy powerhouse.

As a result, the developers of Kodi are legally in the clear but the same cannot be said for the developers of the countless add-ons designed for the express purpose of finding, accessing, and delivering infringing content. The MPA and like-minded companies are in a constant battle to disrupt their activities, sometimes ending up in court to achieve those goals.

Some of these actions are heavily publicized but others maintain a lower profile. In February 2018, a developer known online as ‘Blamo’ (aka ‘Mr. Blamo’) revealed that he, in common with several of his counterparts, had been threatened by content companies. From there the trail went cold but according to a complaint filed against Github this week, legal action in Canada followed.

On September 7, 2018, a dozen companies including the studios of the MPA/MPA-Canada plus Amazon and Netflix launched a copyright infringement lawsuit at Canada’s Federal Court against an individual “doing business” as Mr. Blamo.

“In the context of that action, our clients alleged that [Blamo] notably developed, hosted, promoted and distributed infringing add-ons for the Kodi media center, which provided unauthorized access to motion pictures and television content for which the copyright is owned by our clients,” the MPA writes.

According to Federal Court records, Blamo did not mount any kind of defense so as a result, the matter was decided in his absence. On January 15, 2019, the Federal Court handed down a final judgment, including a declaration of infringement and a permanent injunction.

“The permanent injunction enjoins and restrains [Blamo] from, inter alia, hosting, distributing or promoting infringing Kodi add-ons and their repositories, including notably the ‘Blamo’ repository and the ‘Chocolate Salty Balls’ infringing add-ons,” the MPA adds.

The problem here is that, according to the MPA and associated companies, Blamo has a Github account where it is claimed he continues to “host and distribute infringing Kodi add-ons and their repository, including notably the Chocolate Salty Balls infringing add-on and the Blamo repository.” This, the MPA says, amounts to contempt of court.

What’s particularly interesting here, however, is that the MPA isn’t asking for the specified URLs to be deleted. Instead, it asks for Blamo’s entire Github account to be deactivated instead. According to the studios they wrote to Blamo, most recently on December 19, 2019, to request that he “cease his infringing activities” but that correspondence apparently fell on deaf ears.

“We request that GitHub, Inc. (‘GitHub’) suspend the account github.com/MrBlamo6969 (the ‘Account’). The Account is used by its operator to engage in ongoing acts of copyright infringement in contravention of an Order of the Federal Court (Canada) issued on January 15, 2019, which amounts to contempt of Court by the Account’s operator,” the MPA’s complaint reads.

“We therefore request that GitHub immediately suspends the Account to preserve our clients’ rights and ensure that the letter and spirit of the final Judgment of the Federal Court are respected.” 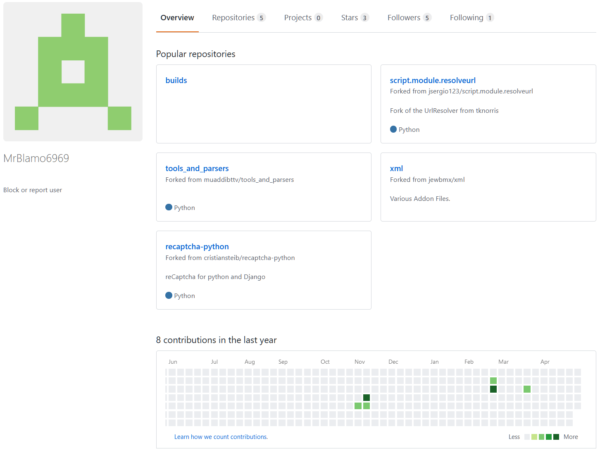 As the image above shows, Github declined to delete the entire account as requested. However, it has deleted the first two URLs listed in the MPA’s complaint, URLs that contained the content specifically covered by the injunction handed down by the Federal Court in Canada.

Whether that will be the end of the matter remains unclear but at least from a functional perspective, Github does appear to have acted in the ‘spirit’ of the court order.