Movie and TV show information portal AlloCiné has reportedly sent a wave of DMCA notices to Google to have allegedly-infringing content taken down. Unfortunately, however, the complaints are littered with clearly erroneous URLs that target everything from Netflix and Amazon listings to news reports from sites like Wired, plus content on rival movie portals such as JustWatch and Rotten Tomatoes.

First launched in 1993, France-based company AlloCiné aims to support the entertainment industries by providing information on movies and TV shows.

The company operates a portal located at Allocine.fr where users can research movies, TV series, actors and view a wide range of additional information such as release dates, for example. While less well-known than iMDb, for example, Allocine.fr is a huge draw with more than 46 million visits per month.

During December 2019 and for reasons that remain unclear, a new wave of DMCA takedown notices began appearing on Google’s Transparency Report, reportedly sent by AlloCiné and targeting a broad range of sites. All told and from a standing start, the company appears to have requested the removal of more than 6,300 URLs from third-party sites, claiming that they infringe AlloCiné’s rights. 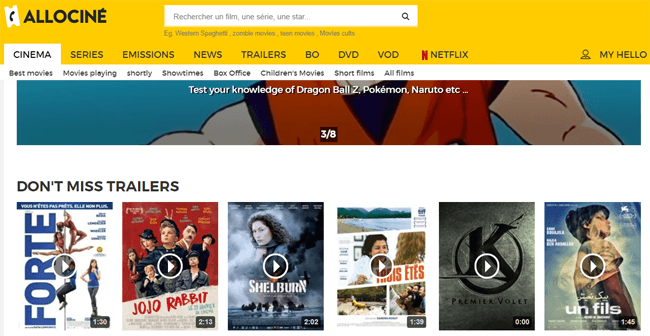 Determining whether that’s actually the case is not easy since the notices submitted to Google don’t include links where original content can be found. The first notice, dated December 16, 2019, seems to target sites that give the impression of being streaming portals. They bear no close resemblance to AlloCiné and Google eventually rejected every single request.

This pattern largely continues across many copyright claims targeting thousands of URLs but then even more glaring errors start to appear.

While similar to those that preceded it, this notice asks Google to delete a page on rival entertainment database JustWatch featuring Game of Thrones. It also demands that a link to a Rotten Tomatoes page detailing The Mandalorian is deleted, just one of many targeting the site in the days that followed.

For reasons unknown, this notice targets the History Channel while another attempts to delist a Harley Quinn article published by Newsweek.

With Google refusing to take action for almost all URLs thus far, another notice persists by demanding the takedown of an information page relating to the TV series Asylum City published on the CanalPlus website. Another targets pages on both MetaCritic and Decider after they covered the Disney show The Imagineers.

Things only go down from here, with another notice targeting four more Rotten Tomatoes URLs, one belonging to Hulu, plus one owned by Paramount Network. Just a day later, another notice swooped back for another bite at Hulu (it is targeted in several notices) plus an attack on the site AllSeries.co.uk. While this might sound like a TV show platform, it is in fact a BMW-focused sales and repairs company in the UK.

Sadly, subsequent notices don’t offer any improvement, with one in particular standing out after targeting news site Le Parisien for writing about Netflix, Wired.com for reporting on The Witcher, and Vulture for recapping The Mandalorian.