Web-based streaming, torrent, and direct download sites have been targeted by the entertainment industries for years but the rise of subscription-based IPTV services is now considered a major threat to business.

These services, available for a relatively small monthly outlay, can (reliability permitting) not only replace licensed TV packages but also video-on-demand services such as Netflix and Amazon Prime Video. Considering the broad range of content on offer, they also compete with physical blu-ray sales and even titles still in their theatrical windows.

Perhaps one of the best-known IPTV brands in this space is Nitro TV / Nitro IPTV but whether that will remain the case in the weeks and months to come remains to be seen. Late Friday a coalition of entertainment industry companies filed a lawsuit against Alejandro Galindo, the supposed operator of Nitro TV, plus an additional 20 ‘Doe’ defendants.

Filed in a California district court by companies owned by Columbia, Amazon, Disney, Paramount, Warner, and Universal, the lawsuit alleges that Nitro TV offers subscription packages consisting of thousands of “live and title-curated television channels” available twenty-four hours a day, seven days a week, throughout the United States and abroad.

“The channels available on Nitro TV include many of the world’s most popular television programs and motion pictures such as The Office, Spider-Man: Homecoming, Toy Story 3, Star Trek Beyond, Homecoming and Joker, including works whose copyrights Plaintiffs own or exclusively control,” the complaint reads.

“Plaintiffs and/or their affiliates have invested and continue to invest substantial resources and effort each year to develop, produce, distribute, and publicly perform their Copyrighted Works through legitimate market channels that in aggregate create a content ecosystem that is safe and reliable for consumers.

“Defendants’ unlawful conduct in operating Nitro TV directly and willfully subverts that ecosystem through pursuit of illicit profits from massive and blatant infringement of Plaintiffs’ Copyrighted Works,” it continues.

Noting that the service can be accessed via the web, mobile devices, and smart TVs, the lawsuit continues with an overview of the Nitro TV business model.

At least in part, marketing is carried out via a Facebook group, with defendant Alejandro Galindo the alleged administrator. This group is described as a platform to promote Nitro TV subscriptions, with Galindo accused of using it to induce, encourage and facilitate infringement. It also doubles as a way to expand the number of individuals re-selling Nitro TV packages to end-users.

“Among other things..[.]..Defendants used this Facebook group platform to inform subscribers of Nitro TV’s new channels and program offerings, to provide subscribers with updates about the Nitro TV Platforms, and to invite subscribers to post on the Nitro TV Facebook Group page the TV shows they wanted added to Nitro TV,” the companies add.

According to the complaint, the website TekkHosting.com is the “primary interface” through which users can obtain Nitro logins, which are acquired in one of two ways – either via a direct purchase or from a Nitro TV reseller. These resellers, which are essentially middle-men, buy ‘credits’ from Nitro which are then converted into end-user accounts, “typically” sold for $20 per month for two devices.

“One of Defendants’ resellers recently boasted about the success of his resell efforts: ‘Over 45,000 customers activated in the last 12 months.’ That is just one Nitro TV reseller. There are scores of them,” the complaint notes.

Once signed up, these customers are able to access an expansive service offering thousands of channels and video-on-demand libraries via convenient interfaces.

“The live television channel offerings are streamed contemporaneously with the original source of the telecast. In other words, the television program airing on a television channel (e.g., FX, the Disney Channel, Paramount Network) through an authorized source (e.g., a cable operator, satellite TV provider) is available on the Nitro TV Platforms at the same time. Many of these television channels include the Copyrighted Works.” (sample below) 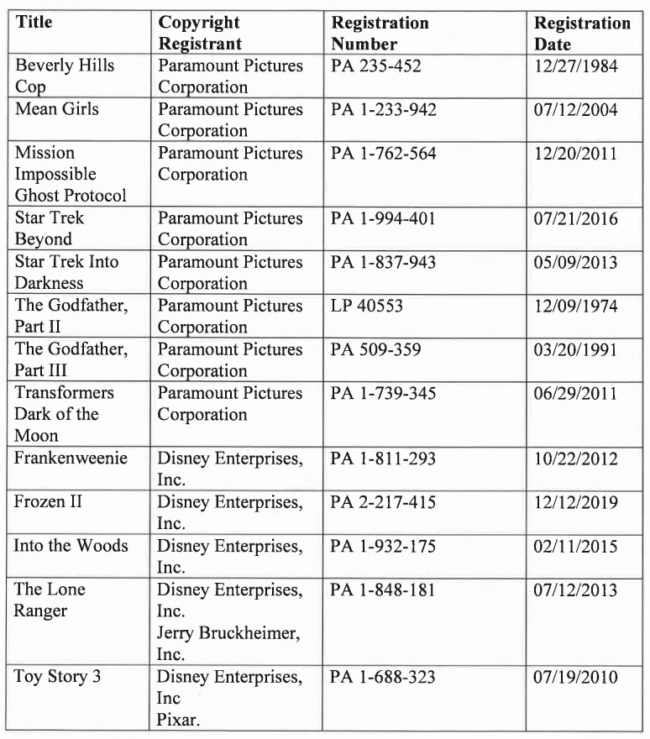 While “thousands” of live channels being made available without the appropriate licensing is clearly contentious, at this stage this aspect doesn’t appear central to the complaint. Instead, it focuses on Nitro’s VOD services and so-called ’24/7′ channels.

Nitro subscribers have the ability to select a ‘catch up’ feature through which they are able to watch shows that aired during the previous two days, on Disney Channel or Paramount Network, for example. This type of VOD service, the lawsuit claims, is “only possible by copying the programming.”

24/7 channels are offered by many IPTV services and usually consist of episodes of a single show or even a single movie played on a continuous loop. By way of example, the lawsuit highlights Peaky Blinders and Friends fin the TV category and Spider-Man and Captain America in the movie section.

Given the reach and scale of the Nitro service, the movie and TV companies believe that it not only undermines their business models but also those of their partners. These include legitimate online services that pay for licenses to show content that Nitro is obtaining for free.

“This unfair competition undermines the legitimate market for content streamed over the Internet, which is a robust and growing part of Plaintiffs’ businesses and an important option to many consumers,” they add, noting that Nitro is creating confusion in the market by misleading people as to what is legal and what is not.

“Nitro TV subscribers and potential subscribers may mistakenly view Nitro TV as a legal and sanctioned alternative to authorized distribution outlets and licensees, when it is not. This harms the market for legitimate services by drawing users away from Plaintiffs’ legitimate licensees.”

Alleging willful direct copyright infringement, the movie and TV company plaintiffs demand either damages and defendants’ profits in amounts to be proven at trial or statutory damages up to $150,000 per infringed work.

Addressing the possibility that Nitro may claim that it is third-parties that are responsible for violating performance and reproduction rights under the Copyright Act, the companies note that the defendants are still “knowingly and materially contributing to such infringement” so are liable for contributory copyright infringement. As such, the plaintiffs are able to claim damages and Nitro’s profits or statutory damages of up to $150,000 per infringed work.

The complaint further alleges that Nitro and the Doe defendants intentionally induce infringement by “supplying and promoting the use of the Nitro TV Platforms to connect customers to unauthorized online sources that stream Plaintiffs’ copyrighted works, and by actively inducing, encouraging, and promoting the use of Nitro TV for copyright infringement.” Again, statutory damages of up to $150,000 are requested.

Finally, the lawsuit demands preliminary and permanent injunctions not only against all defendants, but also third-party companies.

They include Namecheap and Domain.com, the domain registrars for Tekkhosting.com and NitroIPTV.com respectively. It is requested that they maintain “unchanged” WHOIS records for the domains, change their name-servers to those controlled by the plaintiffs, prevent the transfer of the domains, and preserve all evidence relating to them.

Ultimately, the movie and TV show companies seek to take control of all Nitro domain names.