The makers of films such as “Hunter Killer,” “Automata,” and “I Feel Pretty,” went after individual file-sharers, apps such as Popcorn Time and Showbox, and pirate sites including YTS.

This week, the movie companies expanded their efforts by going after a man and company associated with the VPN provider “LiquidVPN.”

Technically, VPNs are neutral services, much like regular ISPs. In most cases, this means they are not liable for the activities of their users. However, the movie companies argue that that logic doesn’t apply to LiquidVPN.

The complaint lists Michigan resident David Cox and his company SMR Hosting as the defendants. They allegedly operated LiquidVPN until early 2019, after which it was sold to the Puerto Rican company 1701 Management.

In addition to these ‘LiquidVPN defendants,’ as they are referred to, the complaint also lists 100 ‘Does’ who used the VPN service while downloading pirated films.

In recent years we have seen several lawsuits against ISPs but, as far as we know, this is the first time a (former) VPN provider has been sued for copyright infringement in the US. The nature of the business is not the main concern, however.

According to the movie companies, the LiquidVPN defendants went further than simply offering a VPN service. They allegedly promoted and encouraged copyright infringement as well.

“The LiquidVPN Defendants actively promote their LiquidVPN service for the purpose of movie piracy, including of infringing Plaintiffs’ Works,” they write.

These are serious allegations that are discussed in a lengthy court filing, with a myriad of arguments. Some are stronger than others, but the overall theme is that the VPN specifically appealed to a pirate audience.

For example, with regard to the piracy app Popcorn Time, LiquidVPN started stating that their VPN service could help avoid prison sentences and settlements.

“The LiquidVPN Defendants state their LiquidVPN service can be used to “Watch Popcorn Time without being detected by your ISP and P2P tracking software,” the complaint reads

“The LiquidVPN Defendants further state, ‘Experience everything Popcorn Time has to offer in the United States and the UK. Except the risks’, ‘Stream Content Anonymously. Why bother risking complaints from your ISP, settlement demands, threats and jail time for streaming your favorite TV show’.”

The complaint mentions a variety of other examples where the defendants directly or indirectly referenced copyright infringing activity. This includes a screenshot of Popcorn Time which shows the Millennium film Survivor. 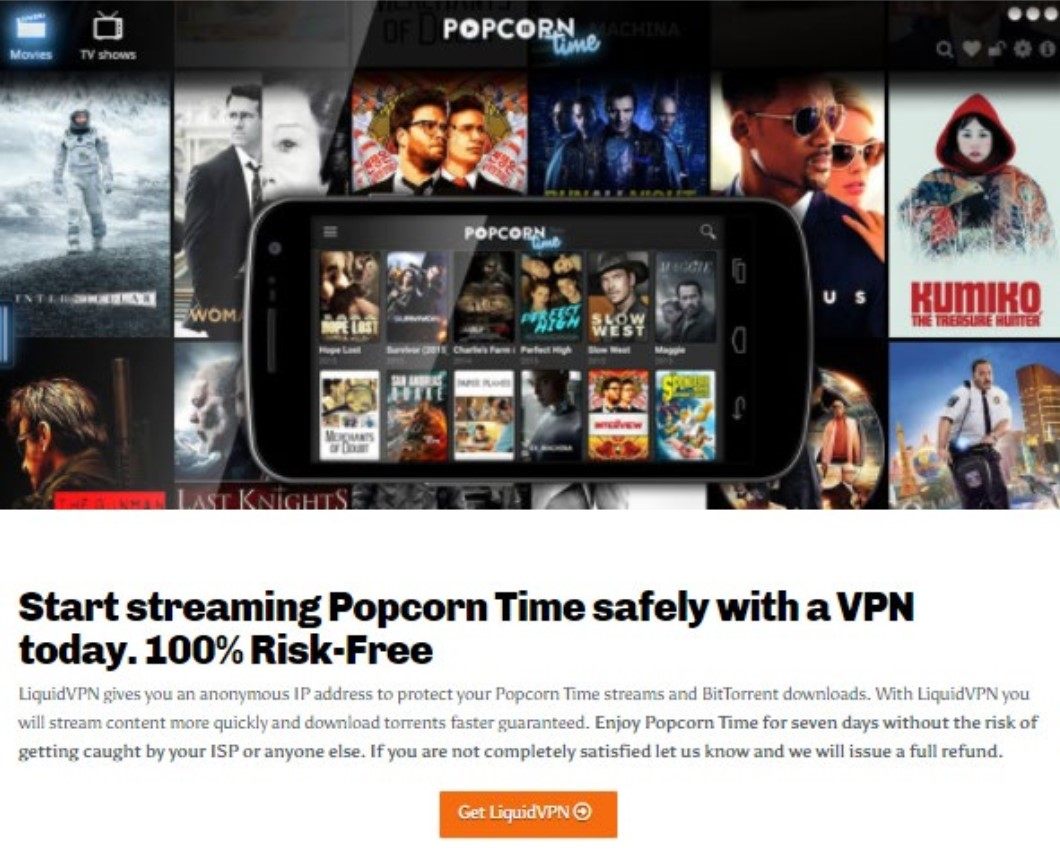 In another example, it mentions that streaming media with Popcorn Time can result in a jail sentence, which can supposedly be avoided with a VPN.

“The LiquidVPN Defendants even blatantly promote their service to be used to stream copyright law [sic] in violation of criminal laws and encourage their users to do so,” the movie companies write in the complaint. 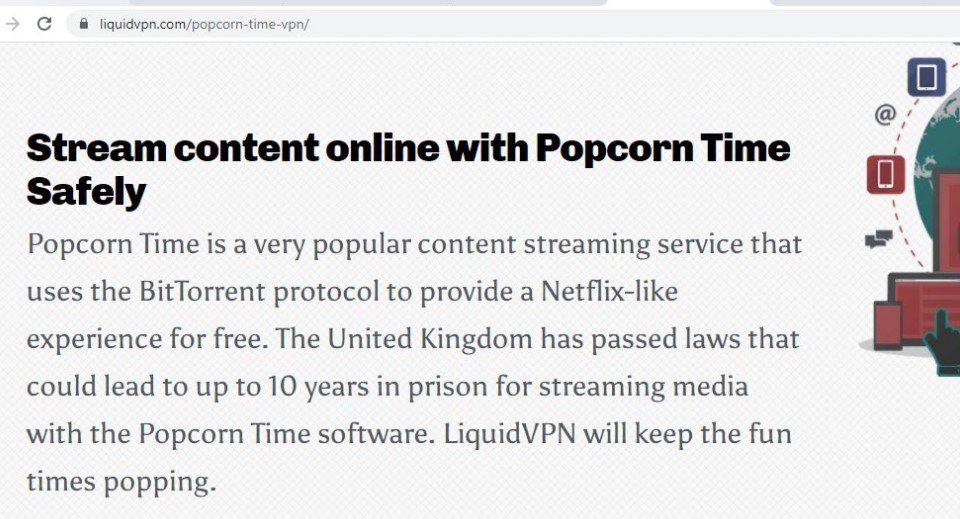 The reasoning is that these public statements ‘encouraged’ the “John Doe” defendants to use LiquidVPN to pirate movies. While the complaint only lists one IP-address, this could have been used by multiple users.

In the US, online service providers can invoke safe harbor protections under certain conditions. However, the movie companies argue that this doesn’t apply to the LiquidVPN defendants, as they failed to terminate repeat infringers despite ample notification.

In addition, the company never had a registered DMCA agent, which is another requirement under the DMCA. On the contrary, LiquidVPN described itself as a DMCA-free zone.

“The LiquidVPN Defendants even promote the fact that their LiquidVPN is a ‘DMCA Free Zone’ as a positive aspect that makes them stand out from competing VPN providers.” 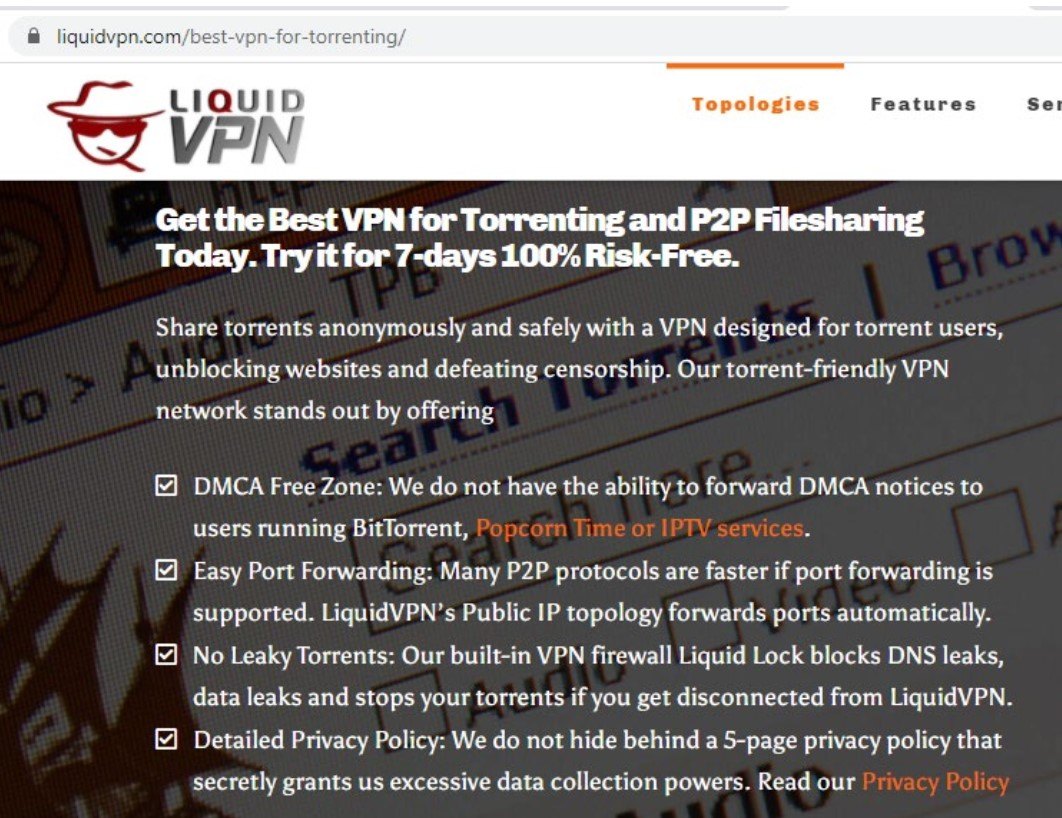 All in all, the movie companies accuse the defendants of contributory and vicarious copyright infringement, as well as various violations of the DMCA. As compensation, the filmmakers demand damages, which can go up to $150,000 per pirated title.

At this point, it’s worth repeating that the defendants – Mr. Cox and SMR Hosting – no longer operate LiquidVPN. This means that the accusations apply to past activities. Whether the movie companies will also sue the present owner is unknown.

This is particularly relevant when we look at the relief that’s requested. In addition to the damages, the movie companies also want the LiquidVPN defendants to take other actions. This includes terminating repeat infringers and blocking websites.

Specifically, they request an order requiring the defendants to “block subscribers from accessing notorious piracy websites,” to “block ports 6881-6889” which are often used for torrent traffic, and to adopt a policy that “provides for the prompt termination of subscribers that engage in repeat infringements.”

The list of sites to be blocked spans all sites that are covered in the USTR’s notorious markets report. This includes classic pirate sites such as YTS and The Pirate Bay, but also foreign e-commerce platforms such as Amazon.co.uk and Snapdeal.com, as well as the social media site VK.com.

It’s unclear to us how the defendants can comply if they no longer have control over LiquidVPN. However, it’s possible that SMR Hosting still works with the VPN company in some shape or form.

Needless to say, these allegations and requests are quite broad and have yet to be proven in court. It is just one side of the story and the defendants can share their position in court during the weeks to come.

Yesterday, the LiquidVPN website was offline for a few hours but it has come back since. TorrentFreak reached out to a contact who was involved with LiquidVPN at the relevant time but we have yet to hear back.

A copy of the complaint, filed by Millennium Funding, Hunter Killer Productions and Voltage Holdings at the US District Court for the Eastern District of Michigan is available here (pdf)