The two companies behind nearly all U.S. file-sharing lawsuits in recent years haven’t filed any new complaints recently. Instead of submitting hundreds of new complaints, there are none. It’s unclear why both companies have halted their efforts but it could have something to do with recent legal developments.

While most piracy activity has shifted to streaming in recent years, U.S. courts have still been overloaded with BitTorrent related piracy lawsuits.

This phenomenon, often dubbed as copyright trolling, started roughly a decade ago and remains ongoing.

This scheme can be both simple and lucrative. Rightsholders file complaints against “John Does” who are initially only known by an IP-address. They then request a subpoena to obtain the subscriber details and demand a settlement from the account holder.

In recent years, the vast majority of the U.S. lawsuits were filed by two adult entertainment companies; Strike 3 Holdings and Malibu Media. Together, they filed over 3,300 new cases last year, which was an all-time record.

Initially, it appeared that they would continue on the same course this year. During the summer we reported that Strike 3 alone had already filed over a thousand new complaints. However, in recent months that changed drastically.

Looking through the federal court records we noticed that there was a notable absence of new cases from both Strike 3 Holdings and Malibu Media. Instead of filing hundreds of new cases, both companies haven’t been active for weeks.

Strike 3 filed its latest complaint in early August, more than four months ago. Malibu Media had its latest filing spree in August as well and only submitted seven new complaints after that, most recently in October. 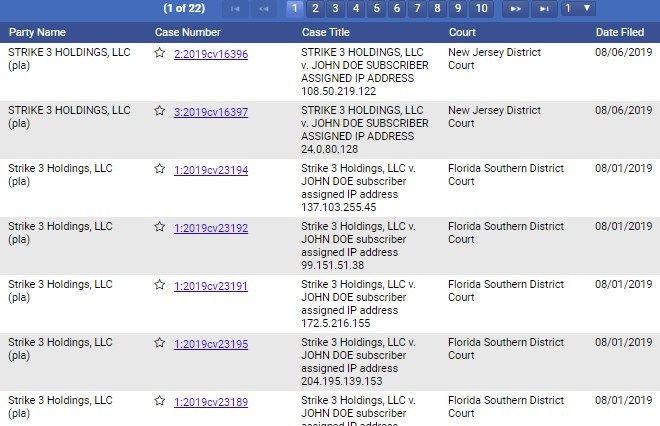 The sudden halt in activity is remarkable, especially since both companies have different legal teams. It’s also a clear deviation from previous years. However, there’s no clear explanation for the hiatus, nor do we know how long it will last.

It could be that the companies are awaiting the outcome of certain legal proceedings. For example, in a few cases this year the court denied expedited discovery. This makes it impossible for the rightsholders to obtain the personal details of infringers.

Strike 3 has appealed that ruling and may await its outcome before filing any new cases, to prevent wasting filing fees.

In addition, there is the Ninth Circuit Court of Appeals ruling from last year in the Cobbler Nevada v. Gonzales case. In that matter, the Court ruled that identifying the registered subscriber of an IP-address is by itself not enough to argue that this person is also the infringer.

This Appeals Court ruling has also proven to be a setback for both Malibu Media and Strike 3 Holdings.

Whether these legal developments are indeed a factor is unknown. Whatever the reason may be, we can already conclude that the all-time record for file-sharing cases in the U.S. won’t be broken this year. The current total is still under 2,000, with just three more weeks to go.