Mega is one of the Internet’s most popular sites, currently storing more than 87 billion files. As a result, the service is regularly targeted with copyright takedown requests. The company’s latest transparency report reveals that complaints have been climbing recently but pirates should beware. To date, Mega has terminated almost 95,000 repeat infringers.

Founded by Kim Dotcom following the takedown of Megaupload in 2012, Mega’s rise has been nothing less than impressive.

Despite parting ways with the entrepreneur several years ago, the cloud storage platform has gone from strength to strength. Late 2013, the site was hosting around 0.6 million files, a figure that increased to 3.6 billion just a year later. In 2019, the site reported 63.8 billion files on its servers but for Mega, significant further growth is only ever a few moments away.

According to the company’s just-published transparency report, by September 2020 Mega was playing host to around 84 billion files, a ~32% increase over the previous reporting period. Those files were uploaded by more than 200 million registered users located in 200 countries, all of whom enjoy end-to-end encryption that hides the content of their files both from Mega and the wider world.

Mega offers features that can be compared to those at Dropbox, so it is an attractive proposition for people looking to back up their own content, documents, and other files. But while Mega is privacy-focused by design, users are still able to easily share their files with third-parties as long as their links contain a decryption key. When this is the case, some users treat Mega like any other file-hosting platform – in some cases to store and distribute copyright-infringing files such as movies, music, TV shows, and just about anything else.

When shared openly with the public, these links to pirated content attract the attention of copyright holders which are then able to file a complaint with Mega to have them taken down. Mega says that complaints and resulting takedowns happen quickly – certainly within four hours but often in minutes.

During the most recent reporting period spanning 12 months to September 2020, rightsholders filed 1.193 million takedown requests with Mega, which sounds like a lot but when compared to the overall storage maintained by the site, percentages are low.

During the months covered by the report, the total number of links and/or files taken down peaked at just 0.0006% of the site’s total files, having hit a low of 0.0002% of total files during the first quarter. (Note: Mega’s first reporting quarter is Q4 of the previous year)

While Mega took down many more links/files during its last 12 month period than it did in any previous year since its inception, the report suggests that in terms of overall content, Mega has a very low ratio of infringing versus non-infringing content.

The chart below shows a general upward trend of links taken down in 2019/2020 but the almost flat red line since 2017 reveals that despite a worrying start back in 2013, the percentage of links/files that aren’t considered infringing on the service are now keeping ratios well and truly pinned back. 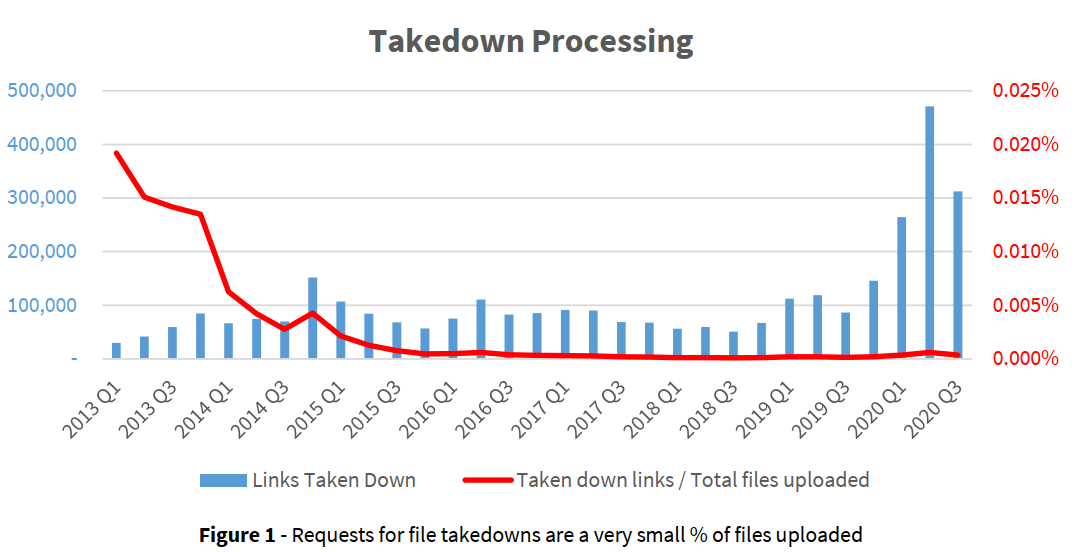 “The number of unique takedown requests submitted represents a very small percentage of the total number of files stored on Mega. In Q3 2020, the links taken down represented 0.0004% of the 84 billion files uploaded to Mega servers,” the company writes.

Also a factor is the volume of incorrect notices sent to the company by copyright holders. Mega doesn’t provide a specific number but does note that when users file counternotices, the majority are accepted by the company.

“This is probably because many content owners and agents trawl the Internet using robots which generate incorrect notices on behalf of copyright owners, and due to the failure of owners and agents to review the specific link content,” Mega notes.

After initially operating a “five strikes” policy, in 2015 Mega introduced a “three strikes” regime to deal with users who receive multiple copyright takedown requests against their account. The company’s policy applies to users who receive three valid complaints in any six-month period. While incorrect claims are disregarded upon successful appeal and don’t count towards a ban, users reaching this limit have their accounts terminated.

“As of 30th September 2020, Mega had suspended 94,966 users for repeated infringement,” the company notes, adding that the data reveals that “suspensions have declined to a very small % of the number of registered users.” 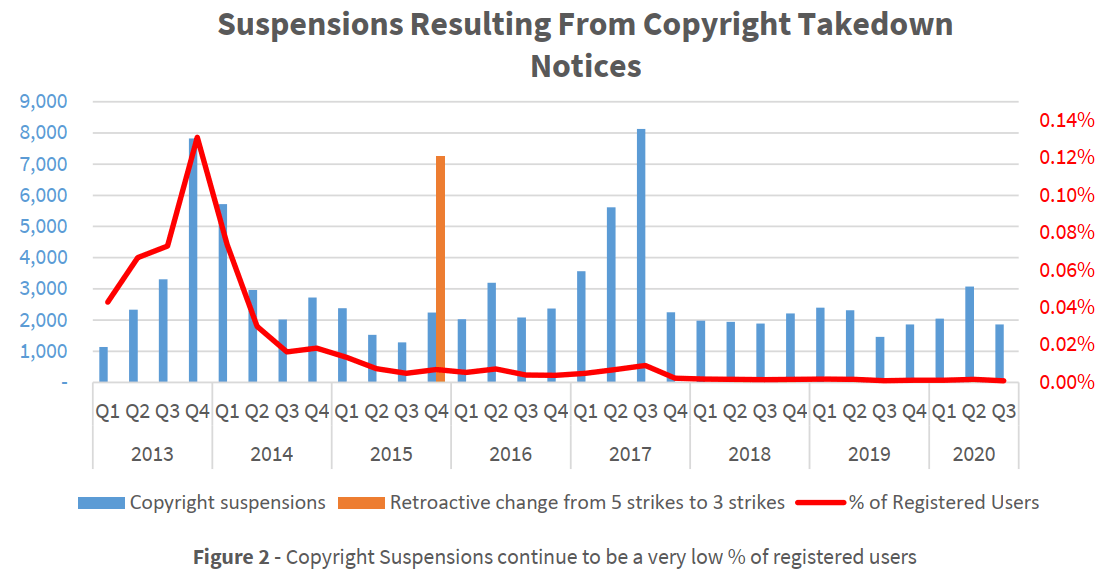 As the image above shows, Mega terminated around 8,850 users during the last 12-month reporting period, which is way down from the peaks observed in 2013, 2015 (change to ‘three strikes’) and 2017, and relatively stable when averaged out over the past three years.

While terminating 95,000 users in total for repeat copyright infringement offenses may sound like a lot, that figure is dwarfed when it comes to the action taken by the company against those who upload child exploitation and other objectionable content. Mega says that it has terminated 565,000 accounts for storing and sharing this type of content and in all cases account information was made available to law enforcement agencies.

“Although all files stored on Mega are encrypted prior to being uploaded to our system, and we therefore cannot access that content unless we are provided with the decryption key, Mega does have access to user registration information and the IP addresses used to access our services,” the company says in respect of handing user data over to the authorities.

“After 12 months, identifying information such as email and IP addresses is anonymized (except that email address records are retained for reference by the user’s contacts or where the user has participated in chats with other Mega users), but other related database records may be retained. This includes records of financial transactions relating to a user’s account where Mega is legally required to retain such information.”