Every year copyright holder groups get the chance to share their list of “notorious” piracy actors to the US Trade Representative.

These recommendations serve as the basis for USTR’s annual report, which is a diplomatic tool to pressure companies and countries to take action.

In recent years this list has slowly expanded to include not only pirate sites and counterfeit markets, but also third-party intermediaries.

The USTR follows this trend and has made online intermediaries a ‘focus issue’ this year. This was illustrated earlier this week when the RIAA and MPA ‘nominated’ several hosting services, domain registries, and advertisers.

These two groups are not alone as many other rightsholders have chimed in as well. This includes Spain’s top football league ‘La Liga‘ which submitted several recommendations that, for the public at large, are not typically associated with piracy.

“Our biggest concern consists of the illegal streaming of live sports competitions by people or companies that are not authorized to do so,” La Liga writes.

The organization starts by highlighting several illegal IPTV services such as Megaplay, Seko IPTV, VolkaIPTV, ATN and King 365 TV, as well as IPTV playlist forums including IPTV URLs and IPTV SAT. These are the usual suspects one would expect.

The second category includes illegal streaming sites like Pirlo TV, BeIN Match and Yalla Shoot, as well as streaming link sites, such as Cable Gratis TV, Hulk Sport and Hulk Sport. Most of these are clearly infringing as well.

La Liga then moves into the intermediary area by highlighting hosting providers. According to the sports organization, these companies can help to prevent infringements but, in most cases, they don’t.

Rightsholders often complain about abuse by pirate sites and services but these complaints don’t have any effect.

“It should be noted that most of the Hosting Providers Companies ignore e-mails and letters referred to IPR infringements,” La Liga writes, after which it sums up the most relevant companies.

This list includes Namecheap, which is located in the US, as well as the Canadian e-commerce platform Shopify. US-based CDN provider Cloudflare gets a mention as well, together with the Russia-based Offshore-Servers and BlueAngelHost from Pakistan.

“Preventive actions are needed to avoid that IPR infringers can host illegal content so easily on the Hosting Provider Companies’ servers,” La Liga notes, while demanding “quick responses and effective solutions” from these intermediaries. 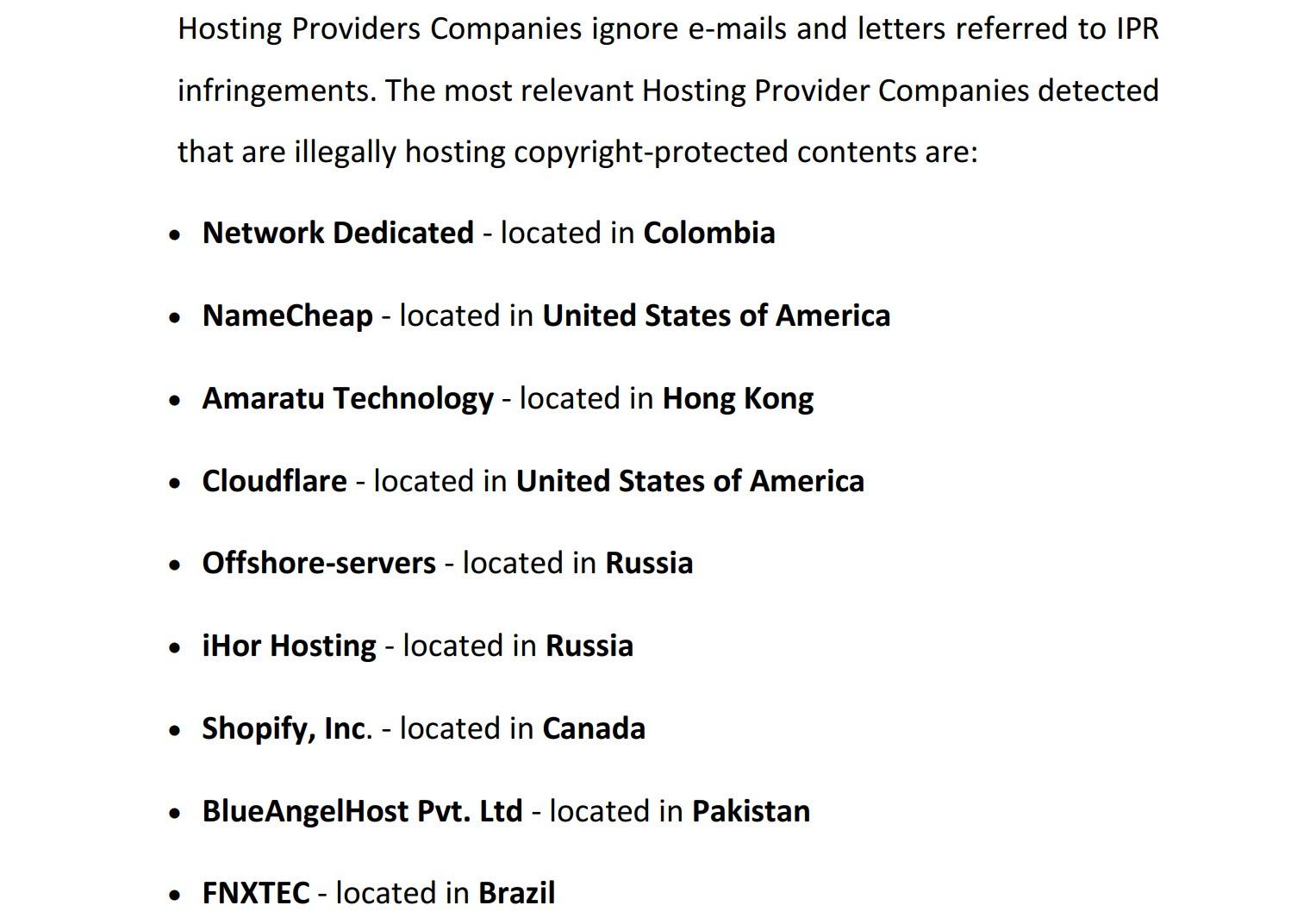 The sports league provides no details on what infringing content these companies host or what action they fail to take. However, it clearly demands a more active and aggressive anti-piracy stance.

The latter also applies to eBay and Alibaba. These companies are listed in the e-commerce category and reportedly offer illegal set-top boxes and IPTV deals.

While these are “somewhat cooperative” in terms of enforcement, according to La Liga, they can do more.

The list of notorious piracy markets continues with ‘cyberlockers’ such as Mega, MediaFire, and Uptobox. These can be used legally, the recommendation notes, but are often used to share pirated content as well.

The latter also applies to social media and communication apps. La Liga calls out Telegram specifically in this regard, noting that it’s “extremely complicated and slow” to remove illegal content from the platform.

“We have detected that Telegram is increasingly being used to illegally share copyright-protected contents through certain channels. Those channels have significantly increased their users, La Liga writes.

These and other recommendations will be taken into account by the USTR which will issue its final list of “notorious markets” in a few months. Whether Namecheap, eBay, Telegram, and Shopify will be called out, has yet to be seen.

Over the past several years, copyright holders have repeatedly called on third-party intermediaries to increase their anti-piracy efforts. The USTR now follows this lead by making it a focus issue and these recommendations are part of the strategy.

However, it’s still an odd sight to see eBay and Namecheap being mentioned alongside The Pirate Bays of this world.