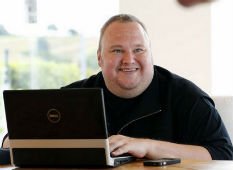 
In 2015, Kim Dotcom asked dozens of ministers and multiple government departments to urgently disclose information to help his case, requests that were ultimately denied by then-Attorney General Chris Finlayson. After a five year legal battle, the Court of Appeal has ruled that the process was flawed, meaning that Dotcom is now entitled to a damages award.

Following the raid on his Megaupload file-hosting site in 2012, Kim Dotcom and his former colleagues have been fighting legal battles on multiple fronts.

Just last week, another chapter was closed after the Supreme Court ruled that while Dotcom, Mathias Ortmann, Bram van der Kolk, and Finn Batato can technically be extradited to the United States to face charges of criminal copyright infringement, the decision came with a caveat.

In 2015, the District Court made a considerable error by not allowing Dotcom’s appeal for a judicial review, something which the Supreme Court insists he must now be allowed before extradition can take place. Another blunder in 2015, this time over another set of Dotcom requests that were disallowed, has today resulted in another incremental win for Dotcom.

Half a Decade Ago, Dotcom’s Request For Urgent Information

Five years ago, in the same year he was wrongfully denied a judicial review, Dotcom made requests to dozens of ministers and multiple government departments to urgently disclose information pertinent to his case and indeed his defense. Rather than handle these requests directly, the parties referred them to then-Attorney General Chris Finlayson. Describing them as vexatious and baseless, Finlayson denied the requests.

This denial prompted Dotcom to file a complaint with the Human Rights Review Tribunal (HRRT), accusing the New Zealand Government of wrongfully withholding information to which he was entitled. In March 2018, the Tribunal ruled in Dotcom’s favor, stating that the Crown was “in clear breach of its obligations under the Privacy Act.”

Dotcom won NZ$60,000 in damages for “loss of dignity or injury to feelings” plus another NZ$30,000 to compensate for the lack of disclosure. In response, however, the Crown appealed the decision and in September 2018 the matter was heard before the High Court in Wellington.

Dotcom lost, with the Court siding with the Attorney-General’s appeal, describing the damages award as “wholly erroneous” on the grounds that there was no evidence to show the information being sought was relevant to the proceedings.

Of course, Dotcom wasn’t done and immediately vowed to reverse a decision that in his words represented a “bad day for human rights” in New Zealand.

After five long years, this morning the Court of Appeal ruled that Dotcom’s 52 requests sent to 28 ministers and many government departments under the Privacy Act were handled incorrectly. In a 42-page decision, the Court found that the former government of John Key was wrong to transfer all of Dotcom’s requests regarding his extradition to then-Attorney General Chris Finlayson.

“[T]he transfers of Mr Dotcom’s information privacy requests to the Attorney-General were invalid and, on the face of it, an interference with Mr Dotcom’s privacy,” the decision reads, adding that the refusal to respond to Dotcom’s requests on the grounds they were vexatious was not supportable.

According to the Court of Appeal’s decision, the dozens of requests filed by Dotcom, which aimed to discover what various government agencies and ministers had been saying about him, should have been handled individually by the entities targeted by Dotcom.

They include New Zealand’s Reserve Bank, which initially responded to Dotcom’s request, and the Ministry of Defence, which also acknowledged the request for information and indicated it was preparing its response before an intervention took place.

The decision to override these and other potential responses and refer them to Finlayson instead was revealed by the Ministry of Justice in a letter to the various agencies dated late July or early August 2015. The subsequent responses from the various agencies to that letter contained an error that was repeated across the board.

The Court of Appeal accepted this as a clear sign that the agencies were provided with a template response by the Crown Law Office.

After allowing Dotcom’s appeal, the Court of Appeal will now send the matter to the Human Rights Review Tribunal. It will consider the scale of the damages owed to Dotcom following the interference with his privacy rights caused by the wrongful transfer of his information privacy requests to Finlayson.

“Big Win – We’ll finally find out what the National Govt was hiding for all these years unless the current Govt continues the unlawful withholding and redaction of information I’m legally entitled to. This Judgement echoes what the Human Rights Tribunal ruled in my case. Exciting,” he wrote this morning.

The Court of Appeal’s decision can be found here (pdf)