The Watchtower Bible and Tract Society, the supervising body and publisher for the Jehovah’s Witness religious group, is using the DMCA to obtain the identity of a self-proclaimed ‘apostate’. In a filing at a New York court, the group demanded that Google should hand over the identity of a person who allegedly uploaded videos of sermons to YouTube without permission.

Reddit user Darkspliver, a member of the Jehovah’s Witness community, was recently targeted by the Watchtower Bible and Tract Society with claims that his postings infringed their copyrights.

The case drew the attention of the EFF which mounted a defense on the user’s behalf, claiming that the subpoena against Reddit was invalid since Darkspliver’s use of Jehovah’s Witness material were covered under fair use. The court agreed.

“Our client shared comments and concerns about the Watch Tower organization — something they have every right to do,” said EFF Staff Attorney Alex Moss this week. “We are glad that Darkspilver is safe from unmasking, and that a judge saw the important free speech and fair use issues at play here.”

While the identity of Darkspliver is now safe, the religious organization now has a fresh target. According to documents obtained by TorrentFreak, the Watch Tower Bible and Tract Society of Pennsylvania has obtained a DMCA subpoena that requires Google to reveal the personal details of a YouTube user who uploaded Jehovah’s Witness sermons to the video platform.

The subpoena targets an account called ‘JW Apostate’ which advertised itself as a place for “leaking Watch Tower videos”.

At least initially, the channel had many videos listed for viewing but the DMCA subpoena application lists just five.

“Watch Tower conducted a good-faith fair use analysis of numerous infringing posts on the account at issue,” the application filed at a New York court reads. “This content infringes copyrights held by Watch Tower.”

Watch Tower informed the court that it had fulfilled all the requirements for obtaining a subpoena and its sole purpose is to “obtain the identity of an alleged infringer or infringers” so that copyrighted content can be protected. 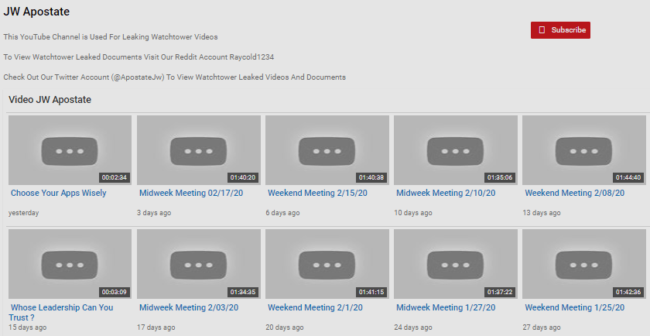 A day later, District Judge Cathy Seibel signed off on the Watch Tower request and ordered the clerk of the court to issue the subpoena against Google LLC.

“Having considered the Declaration and all documents submitted in support of the instant application, the Court finds good reason to issue an order directing the clerk to issue said subpoena.”

The Watchtower Bible and Tract Society is no stranger when it comes to DMCA subpoena applications or indeed Judge Seibel. The religious group has attempted to obtain several subpoenas in New York courts against Facebook and YouTube users, filing around 60 applications overall since June 2017.

Considering that the aim of most Christian-based religions is to spread the word as widely as possible around the world, it appears that those at the top of the Jehovah’s Witness group would prefer to control access to their information much more tightly.