Alleged pirates who installed cracked copies of expensive Siemens CAD tools on their computers are facing potentially huge settlement demands after the software “phoned home” informing the company of the illicit use. The Australian Federal Court has ordered ISP Telstra to hand over the personal details of the suspected infringers.

After IP addresses are monitored in BitTorrent swarms, companies regularly obtain court orders requiring ISPs to hand over the personal details of alleged infringers, to whom they send correspondence threatening a lawsuit, unless they pay up of course.

On first view, a case in Australia seems to follow a similar pattern but the details reveal a more interesting set of circumstances.

In an application filed at the Federal Court in Australia, Siemens Industry Software Inc asked the Court to compel local ISP Telstra to reveal the identities and personal details of “20 potential infringing users” who used “cracked” versions of its software.

However, instead of tracking these alleged pirates in BitTorrent swarms, Siemens obtained evidence of their infringement directly from their computers.

Expensive Software With the Ability to “Phone Home”

The software in question, NX and Solid Edge, are extremely expensive CAD packages that come in individually licensed modules carrying price tags of up to AUS$60,000 (US$41,200) each, with bundles topping out at more than AUS$337,000 (US$231,000) according to Siemens’ application. What’s special in this case is that both pieces of software are able to “phone home”, providing the developer with evidence of infringement.

“In order to prevent and detect copyright infringement Siemens has developed and uses an ‘automatic reporting function’ or ARF, which it has embedded in each of the asserted software products. It cannot be removed or ‘switched off’ from the asserted software,” wrote Justice Burley in his order handed down last Friday.

The ARF is able to identify the specific computer on which unlicensed copies of software are used, information that is then transmitted back to Siemens when the computer running the software is connected to the Internet.

Siemens is on the lookout for “cracked” versions with their protection removed, examples of which can be found on The Pirate Bay, among other sites. 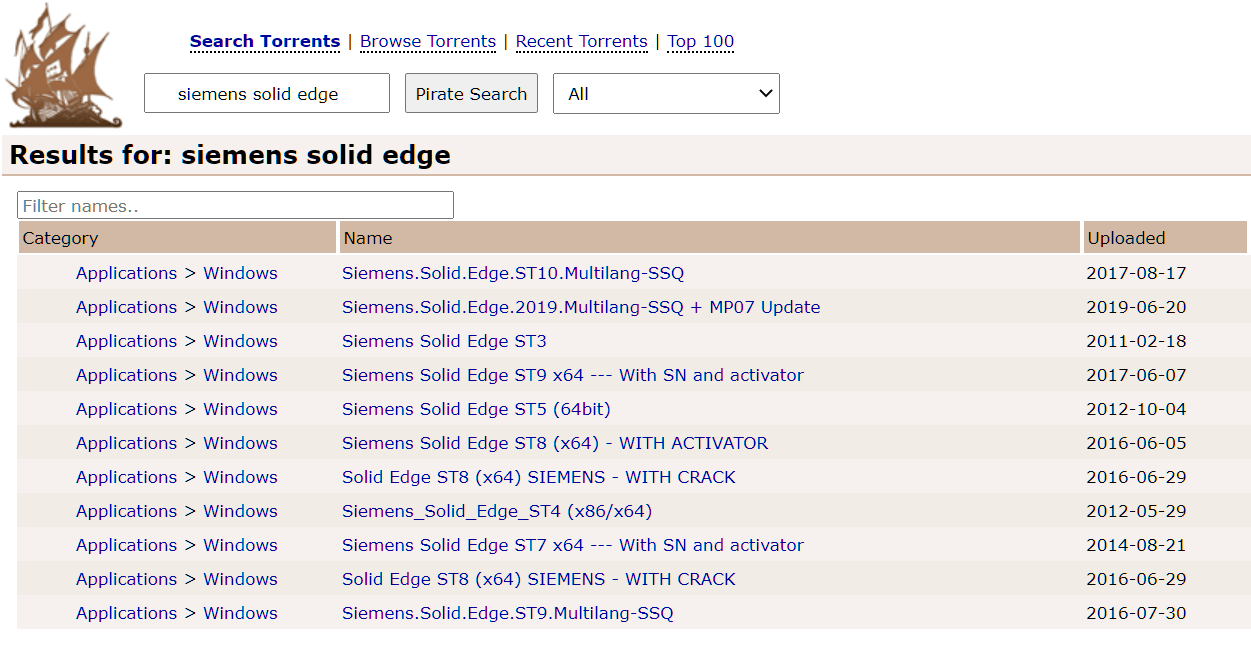 How the ARF works was detailed to the Court in a confidential affidavit but there are claims that it is sometimes able to identify the person who cracked the software, the email address of the entity using the software, plus an IP address, in this case those allocated to Telstra customers.

“Material Reproduction” of the Software in Breach of Copyright

Considering that the ARF is part of the software in question and was able to communicate back to Siemens, the Court was convinced that a “material reproduction” of the software had probably taken place without a license, in breach of copyright. As a result, Telstra is now required to hand over the details of the subscribers associated with the IP addresses identified by Siemens.

In his order, Justice Burley seeks to ensure that any information obtained by Siemens is used appropriately, referencing the ultimately-failed Dallas Buyers Club case of 2015. Interestingly and perhaps of comfort to those who may have downloaded Siemens’ software purely for home use, the company has assured the Court that it will not pursue people who have not used the software commercially.

TorrentFreak was able to obtain ‘NFO’ text files that were released by cracking/piracy groups associated with the Siemens products in the case detailed above. While they contain detailed instructions on how to get the software running without paying, they appear to be oblivious to the existence of the ARF.

The Federal Court Order, which includes the IP addresses targeted by Siemens and a copy of the letter it intends to send alleged infringers, can be obtained here (pdf)