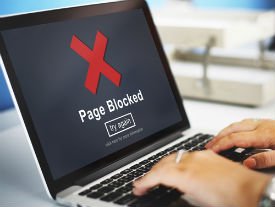 
A report from anti-piracy group Rights Alliance reveals that the volume of Danish visits to pirate sites remained steady in 2020 but the overall number of users of illegal services dropped by almost 18%. Rights Alliance attributes the decrease to several initiatives including site-blocking, but also a tendency for users to consume pirated content on legal platforms such as YouTube and Facebook.

As one of the most popular anti-piracy tools, site-blocking attracts plenty of attention.

Originally a mechanism to prevent static torrent and streaming sites from reaching their audiences, site-blocking is now just as likely to encompass relatively nimble live TV and sports streaming platforms too.

Over the past several years, Danish anti-piracy group Rights Alliance has invested considerable resources into blocking all kinds of pirate sites, with interesting results.

Last year, Rights Alliance revealed that in 2019 its work had resulted in 141 sites being blocked by the majority of ISPs in the country. Citing a MediaVision survey covering the same period, the anti-piracy group concluded that around 450,000 Danes were using illegal sites, between them chalking up around 146 million visits annually.

In its latest annual report made available this week, Rights Alliance (RA) reveals that it had 196 “illegal domains” blocked in 2020, up 55 on the previous year. The focus was on “mirror sites”, i.e sites that look identical to their previously blocked counterparts while attempting to circumvent blocking with automated redirection systems and new domain names.

RA says that mirrors have a “volatile nature” in that they have a shorter lifespan, are harder to find, and thus require special handling when it comes to blocking. In part, however, this can be dealt with via court-ordered dynamic blocking injunctions which are currently in place covering a wide range of content including movies, music, TV series, literature and live sports.

Overall, RA observed a decrease in ‘pirate’ site users last year, down from 450,000 in 2019 to around 370,000 users in 2020. Interestingly, however, the overall number of visits to pirate sites in 2020 remained stable at around 12 million visits per month, i.e very little change when compared to the 146 million reported overall in 2019.

RA believes that the decrease in identified users can be in part attributed to blocking but concedes that VPNs and third-party DNS services play a part, as does migration to other platforms where piracy is less easily monitored.

“Unfortunately, the decline in the number of users is probably also due to the fact that the users have moved to other platforms where consumption cannot be immediately measured in the data sets of MediaVision and SimilarWeb,” RA writes.

“A new challenge that has become clearer in recent years is the increasing decentralization of illegal content to legal services, such as YouTube and Facebook. Here it is not possible to measure illegal consumption and the users are not necessarily aware that they are consuming illegal content, as the service itself is legal.”

Rights Alliance and its rightsholder partners are not defenseless in this scenario, since legal ‘UGC’ platforms are more likely to respond to takedown requests than pirate sites. Additionally, both YouTube and Facebook have their own suites of anti-piracy tools and will be required to respond to important aspects of the new EU Copyright Directive. Rights Alliance says it has this under control.

“In 2020, we have therefore intensified the work with the platforms’ responsibility for copyright infringement – i.e through dialogue with the platforms and in the work of implementing Article 17 of the EU Copyright Directive in Danish law,” RA notes.