Hurricane Electric (HE) is one of the major network providers on the global Internet. The company operates the largest IPv6 backbone which facilitates Internet connectivity to people all over the world.

Unlike consumer ISPs, HE mainly provides its services to large organizations – some of which are ISPs themselves – that have thousands of customers, or are customers of customers.

Somewhere down this line, there may be people who abuse their Internet connections by using them to download pirated content. While HE has no direct control over these end-users, a group of movie companies claims that it is responsible for their actions.

The companies, which are connected to familiar movies such as Rambo: Last Blood, London Has Fallen, Dallas Buyers Club, The Hitman’s Bodyguard and many others, are no newcomers to piracy claims. In recent years they have sued many individual downloaders, cases that often end up in private settlements.

Behind the scenes, however, the companies are also putting pressure on third-party intermediaries including Hurricane Electric. Through their lawyer, Kerry Culpepper, who’s also known for targeting pirate sites and apps, they argue that HE is liable for piracy activity that takes place on its network. 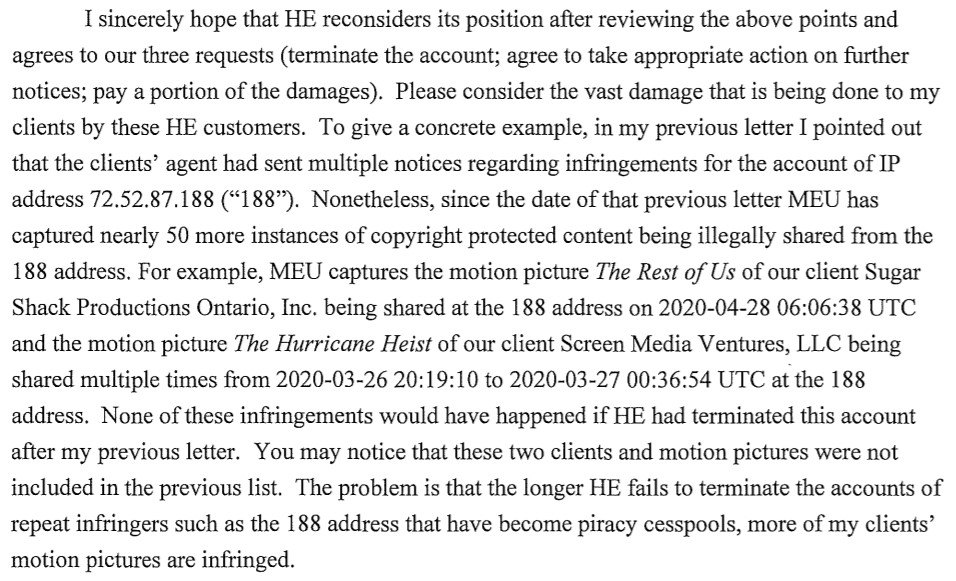 These accusations were not made in court. The movie companies simply reached out to HE directly after obtaining a subpoena which required the backbone provider to share the personal details of pirating subscribers. The movie companies seized this opportunity to demand more information and action from the company, or else.

These requests have now reached a point where HE feels it has to take action. The company has filed two lawsuits, one in California and one in Nevada, hoping to put an end to these claims. Specifically, the ISP requests a Declaratory Judgment stating that it’s not responsible for copyright infringements that take place through its customers.

“Defendants’ cease and desist letters are demanding that upstream service providers like HE simply shut down entire Internet Service Providers (ISPs) that provide Internet access to thousands and sometimes tens of thousands of people, based solely on allegations of infringement by even a single unidentified end-user subscriber to an ISP,” HE explains.

“Defendants are thus putting HE in an impossible situation, all based on an improper and unlawful overextension of Defendants’ alleged copyright rights,” the company adds.

According to HE, the movie companies repeatedly asked the upstream provider to terminate customers. This includes some who are ISPs themselves, as well as the U.S. Navy’s Naval Research Labs. In addition, the movie outfits have also demanded damages in excess of $500,000. 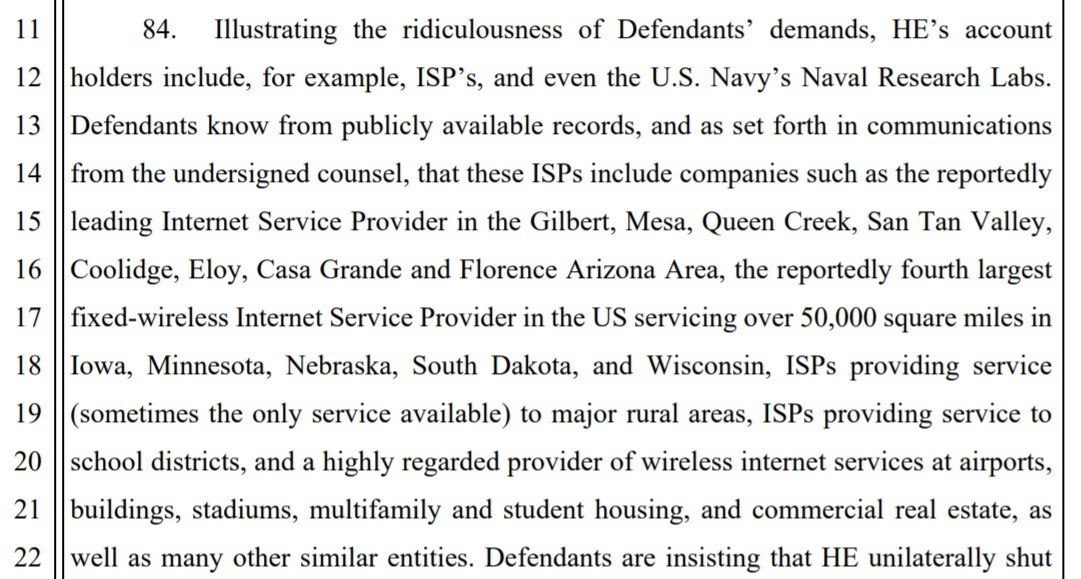 The backbone provider notes that if these movie companies want to enforce their rights, they should go to their respective customers directly. That’s a much better option than disconnecting entire cities or schools from the Internet, it argues.

“It is simply not appropriate to shut down an entire city, a school system, rural area with subscribers covering a 5-state region, or an airport internet provider at such airports as LAX because defendants do not want to bother contacting the ISP providing service from HE’s backbone so that Defendants can obtain the information identifying the specific infringer.”

HE characterizes the movie companies’ demands as “ridiculous” and stresses that it merely acts as a passive “highway” that allows its customers to connect to the Internet at large. It can’t control or stop individual pirates who are customers of customers.

In addition to a declaratory judgment of no copyright infringement, the backbone provider also accuses the movie outfits of abusive and tortious acts that equate to copyright misuse.

“Defendants are thus putting HE in an impossible situation, all based on an improper and unlawful overextension of Defendants’ alleged copyright rights. Defendants’ letters and demands to HE are abusive, tortious, and otherwise wrongful,” HE claims.

The complaint mentions that the same movie companies have used the court system to bully unsophisticated Internet users in order to collect settlements. These often start by threatening hundreds of thousands in potential damages but end up being settled for a fraction.

HE also points to the settlements some of the movie companies signed with the popular torrent site YTS, which agreed to pay over a million dollars, but was allowed to continue operating as long as their own films were removed.

“Notwithstanding the settlement, there are still hundreds of pirated movies on that piratical site,” HE writes in its complaint.

The backbone provider adds that these movie companies are more interested in collecting cash than stopping copyright infringements.

“Defendants do not actually care about stopping the ongoing infringements of their copyrights; they just want large immediate one-time payments from each service provider they can associate with the still-allegedly infringing IP addresses,” the company adds.

With this complaint, HE hopes to put an end to the repeated threats from the movie companies. In addition to the requests for declaratory judgments in its favor and the copyright misuse claim, it wants the defendants to pay their legal costs, to deter others from abusing the system in a similar manner.

Needless to say, the outcome of this case will be crucial to how the entire Internet operates. We have previously seen other ISPs being held liable for pirating subscribers. If this liability expands to backbone providers, things will get even more problematic.

TorrentFreak obtained copies of of Hurricane Electric’s complaints against the movie companies, filed in a California (pdf) and Nevada (pdf) federal courts.