Infamous release group Hive-CM8 has leaked a screener copy of the Disney hit movie Frozen 2. While the group is careful not to release any movies which have yet to break even, it sees Frozen 2 as fair game, as it already “played in the budget”. That said, Hive-CM8 encourages those who want the full experience to see the movie at a local theater. 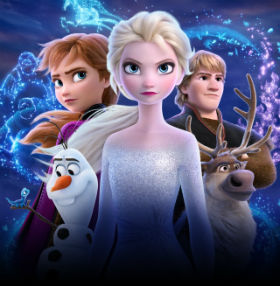 Every year movie screeners are sent out to industry insiders who cast their votes for the Oscars and other awards.

While these releases are generally well-protected, several titles still manage to leak online. In recent years, piracy group Hive-CM8 has been the source of most of these leaks. It has been no different this time around.

The first two screeners that were released – ‘Uncut Gems‘ and ‘Portrait of a Lady on Fire’ – were released by rival group EVO. After that, however, Hive-CM8 joined in with several screener copies. The group also made it clear that it was still looking for more sources, specifically requesting ‘Frozen 2’ and ‘Star Wars.’

This request was answered, at least in part, because the group’s first release of the new year is a screener of Frozen 2. In fact, the leaked Frozen 2 screener is branded as “the happy new year’s release.”

“The happy new year’s release is here! for all kids and everyone who loves it too, have fun guys,” Hive-CM8 writes in its release notes.

This is a rather significant leak that will trigger millions of downloads. While it may please many pirates, Disney will not be happy. The movie is still playing in theaters and the official digital release is still months away.

Hive-CM8 previously promised to play nice with Hollywood. That means not releasing films too early. However, the group notes that Frozen 2 has already “played in the budget” which means that it is “ready to go.”

Fair game or not, the pirate group stresses that the quality of screeners is nothing compared to that of the big screen. Those who want to have the best experience are better off going to their local movie theater.

“Please keep in mind a Screener does not represent the Video and Audio quality the Producers intend to show, so please support your local cinemas for the full Experience,” Hive-CM8 writes.

At the time of writing, seven screeners have leaked this season. This means that, at this rate, last year’s all-time low of eight leaks will be easily exceeded. In any case, Hive-CM8 doesn’t plan to stop yet and is calling for more sources in its release notes. 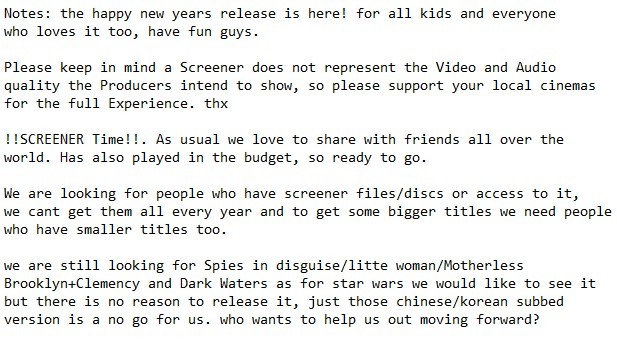