There has been an interesting development in the way that Google handles DMCA anti-circumvention notices sent by the RIAA. These have been used dozens of times by the music industry group to have YouTube-ripping platforms removed from Google search. Since the controversy over youtube-dl, however, Google appears to be rejecting similar complaints.

The member companies of the RIAA are no strangers to sending DMCA takedown notices to have content removed from Google search. At the time of writing they have sent more than 94.4 million across more than 20,600 domains.

The vast majority of these are standard DMCA claims, targeting content or links to content that directly infringe the labels’ rights. However, in more recent times the labels added a new tool to their arsenal in the form of DMCA anti-circumvention notices.

These first started to appear in earnest during 2019 and then continued into 2020. The majority targeted sites operating in the so-called YouTube-ripping niche, specifically those that allow users to enter a YouTube URL and have a permanent MP3 file dumped to their local machines.

The RIAA soon discovered that if it formulated its notices in this way, while alleging that sites circumvent YouTube’s ‘rolling cipher’, Google would permanently remove the URLs. Importantly, there is no official counternotice system to contest such takedowns, something which resulted in a game of whac-a-mole as sites took countermeasures.

However, in October 2020 a special controversy was ignited and, out of nowhere, that appears to have changed the rules of the game.

Back in October the widely publicized attempt by the RIAA to have YouTube-ripping tool youtube-dl removed from Github caused outrage.

Github’s CEO quickly got involved and not long after, the tool was reinstated by the coding platform, with the company putting $1m into a defense fund supported by the EFF.

These important developments seemed like they had the potential to have a negative effect on pending RIAA legal action but it now appears that the RIAA’s Google delisting work is already being affected.

Just weeks after Github reinstated youtube-dl, the RIAA began targeting Google again with similar demands. The first complaint asked Google to remove 16 URLs from its indexes belonging to YouTube-ripping site mp3-youtube.download. The complaint followed the established format of stating that the service breaches YouTube’s ‘rolling cipher‘, in breach of the labels’ rights.

“To our knowledge, the URLs indicated provide access to a service (and/or software) that circumvents YouTube’s rolling cipher, a technical protection measure, that protects our members’ works on YouTube from unauthorized copying/downloading,” the notice reads.

With interesting timing, coming directly after the youtube-dl controversy, Google’s response was different this time around. The company rejected every single DMCA takedown notice marking each with a ‘No action taken flag’ (1,2,3,4) while declining to remove any of the URLs from its indexes. 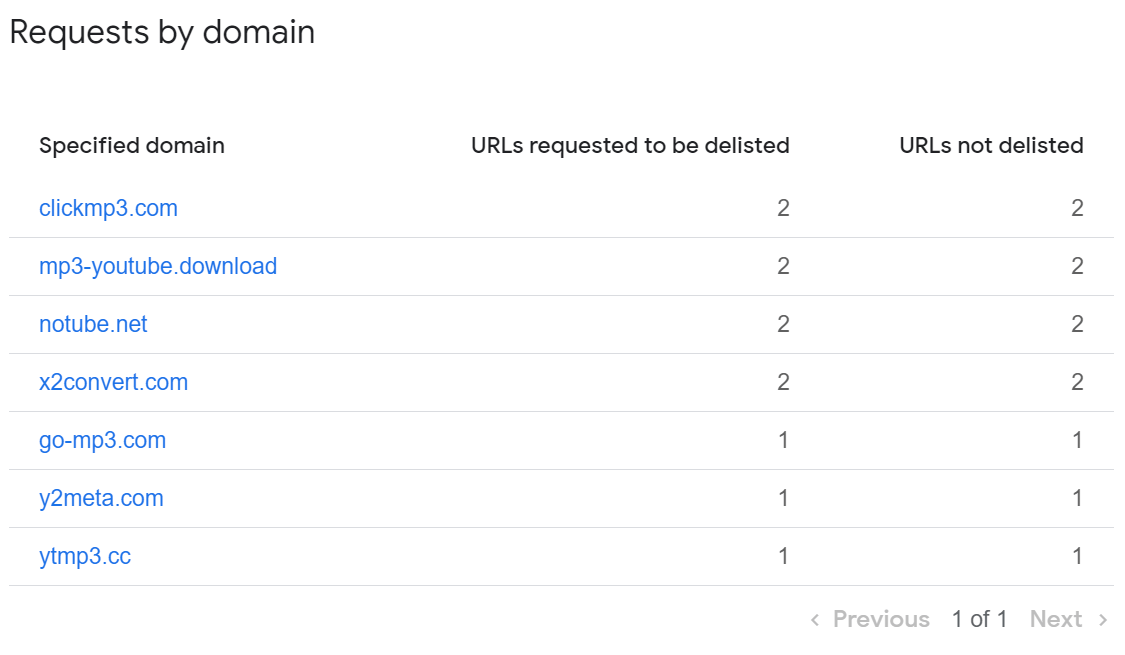 Google provides no reason for the rejections but on past experience, it appears that the search giant no longer considers the RIAA’s complaints to be valid. This raises an important question.

While likely to be welcomed by the sites targeted in the most recent batch of anti-circumvention notices, huge volumes of URLs have already been removed following earlier complaints. Interestingly, however, some DMCA notices that previously resulted in the removal of homepages belonging to several major platforms are no longer appearing at the bottom of search results.

For example, the RIAA previously and successfully demanded the removal of youtubeconverter.io, yout.com, y2mate.com, flvto.biz and 2conv.com. At the time of writing, searches for those domains in Google show that removals against 2conv.com, flvto.biz and y2mate.com appear to have been removed but those against the remaining pair still stand.

Google will almost certainly consider future requests on a case-by-case basis but at this stage at least, it seems that the action against youtube-dl has quite possibly changed the game in a way that the RIAA would’ve preferred to avoid.