When content protection mechanisms began to be deployed at scale on videogames in the 1980s, no one really cared about the ones that were easily bypassed. The reason was simple: they caused no problems for pirates so didn’t stir up many emotions.

On the other hand, the systems that were more difficult stoked irritation among pirates. In short, anti-piracy methods that did their job became the most famous and caused the most annoyance. Until they were circumvented, that is, then everyone laughed in their faces. Until the next ‘uncrackable’ DRM came along.

Jump forward four decades and nothing much has changed, with a notable exception. Easily bypassed anti-piracy systems still get virtually no air-time but those that do the best job – Denuvo, for example – are spoken about constantly. The big shift, however, is the scale of the vitriol and some cases pure malice directed towards largely successful systems like Denuvo.

Pirates in the 80s were glad for what they could get but modern-day pirates have a tendency to demand everything as standard. But will they go as far as paying for people to crack games? We might be about to find out.

Late August the piracy scene was thrown into chaos following what are now considered to be historic raids centered on the SPARKS group. The action forced an almost complete shutdown of The Scene and since then, pirated copies of Denuvo-protected games have mostly run dry.

Previously, Scene groups such as CODEX, CPY and STEAMPUNKS had kept things humming along, with the earlier assistance of P2P players including Voksi and Baldman. Now, however, attention is being focused on an individual and potential savior known as ‘EMPRESS’ but not without controversy.

Over the past couple of years, cracked Denuvo games have been released under the EMPRESS and C000005 brands, with early suspicion that they were probably one person. Indeed, speaking with TorrentFreak this week, EMPRESS admitted they are one and the same.

However, while Scene groups maintain cover, EMPRESS is now more public than ever, posting to sites like Reddit to converse with fans and those interested in the cracking scene. Interestingly, the proposal now is a little different.

This week EMPRESS announced that while they are prepared to keep releasing titles with Denuvo protection bypassed/removed, funding is needed to ensure that the operation can continue. In presentation terms, it looks a bit like a crowdfunding campaign, with rewards offered to donors in exchange for new games releases and even public shout-outs in NFO files.

“In order all this to happen, I will need all your support. I will post few coins addresses below and two ways to contact me directly,” the announcement reads.

“Each of you who donates and contacts me to confirm his donation can receive by his/her request to be added as a contributor in next release’s NFO. Larger contributors will receive the privilege to also add 100 character message of their choice that everyone will be able to see, in the NFO. Could be even self promotion, just no bullshit.”

Where Will the Money Go?

This week’s call for support didn’t include a breakdown of where the money would be going or even why it is needed but EMPRESS informs TF that the money will be spent on buying games, hardware, and personal expenses.

“The funds I receive will be used for living costs, testing hardware and buying the games themselves. People can also contribute by gifting me the said games by contacting me on my mail or my qtox, so more of the funds can go towards hardware for testing,” EMPRESS explains.

This allocation of funds is largely in line with information previously released alongside an EMPRESS-cracked version of SoulCalibur VI, which also contained a swipe at a certain anti-piracy outfit described as a “garbage” and “controlling” company that tries to take freedom away from consumers.

But, as we have heard, taking that control away now appears to come with a price tag, something that wasn’t attached to previous cracked releases offered by The Scene. That said, the position on the ground has changed dramatically in the past few weeks and if The Scene is going to be slow in releasing games, this may be the only option.

But throwing money into the mix changes the overall equation quite a bit.

Irony and Ideology Go To War

For those who do not support piracy, the cracking of anti-piracy technologies, or are simply pragmatic, there’s a generous helping of irony here. The only reason Denuvo exists is because pirates like to obtain games for free. If people always wanted to pay for games, the company itself would cease to exist. Wrapped another way, the best way to kill Denuvo forever is for people to stop pirating games.

Given that’s not going to happen, Denuvo is currently doing its job of protecting games in the early parts of their release windows. However, the politics and ideology surrounding Denuvo present a unique situation. While plenty of people just want free games and couldn’t care less as long as Denuvo is bypassed or cracked, there is a hardcore of fans who see the company as some kind of boogeyman.

Hatred runs deep alongside beliefs that the system is anti-consumer and only hurts those who are paying for Denuvo-protected titles bought through official channels, largely through reported poor performance on PCs. For EMPRESS, however, other things are at stake too.

“I do what I do not because I want to get rich from doing cracks. I need the money so I purely focus on my preservation mission as true OWNERSHIP of something I loved means everything to me,” EMPRESS informs TF.

“You can be rich and buy all the games you want but you can never buy true ownership anymore. Everything is rented licenses that can be taken from you at any given point in time. How can you enjoy something if you know there is even a slight chance of its license expiring 20 years from now? Or do people just like to be slaves?”

Given the alignment of EMPRESS’s beliefs with that of anti-Denuvo supporters, it may well be that EMPRESS gets the support they need in the long run. However, we asked EMPRESS whether pirates have shown themselves to be generous thus far and although we received no response, at least partial information is available from public records.

One of the cryptocurrency wallets linked to the funding campaign lists just three transactions amounting to just under $50.00, barely enough to buy a game and certainly not enough to live on. There might be other funds coming in through wallets that aren’t so easily viewed but thus far support seems low.

EMPRESS Says That Venture With The Scene Went Nowhere

While Scene etiquette dictates that groups and members shouldn’t become involved with P2P-based entities and groups, it’s an open secret that the directive is flouted all of the time. In the case of EMPRESS, being more directly involved was apparently on the cards earlier this year, but nothing came of it.

“Not long after my Assassin’s Creed release, I was offered to join The Scene with great promises. I only accepted because I didn’t get enough support from my p2p work to let me continue to invest all my time into DRM research, even though I perfectly knew I will have to suddenly disappear from the public,” the announcement this week revealed.

“I spent huge chunks of time researching Denuvo v5, v6, v7, v8, all of its intermediate variants and I developed all the tools needing to crack them. The problem here is as turned out, the old men in The Scene were only big on talks, but very little on action. Lots of empty promises and little to no care, even though I did 90% of the work in my stay there.”

According to EMPRESS, the Scene is “not going to make some miracle comeback” following the raids in August. Indeed, the claim is that the Scene “was already very rotten” before those events took place and that efforts to release a crack for two games fell on deaf ears.

”
… I couldn’t do any progress on Denuvo AT ALL. And as a result, I became very tired. And you wait for those people to save you? Especially after the busts, 95% of the scene is in dead silence. My mistake was leaving you and going with them in promises of fake support, so I am sorry for that.”

Maybe. Possibly. Probably. It really all depends on who one speaks with.

We asked directly whether EMPRESS / C000005 was/is one of the crackers at CODEX, since some previous releases contained aspects that looked markedly similar. To this question, we received no clear response, aside from a note that some details of what happened will be kept confidential. What we got instead was heavy criticism of a system that isn’t working as EMPRESS would like.

“The misconception about The Scene never asking for money or support is firstly because they never had any real goal to begin with. They do what they do purely to satisfy their own fake EGO of how ‘great’ they are and even after 30 years they still live in that illusion,” EMPRESS says.

“But in reality, they have almost nothing anymore. Most of their real talents left to work for Denuvo and other companies like it so now all those groups are nothing but former shells of what they once were. It is hollow and rotten.

“I was honest with them of what my goals were and that I am not interested in any shallow competition. I just needed their support of achieving my dream, nothing more, nothing less. The funny thing is they offered me that support in the first place, but it just never simply happened.”

Precisely who ‘they’ are remains unknown. Some people have pointed towards CODEX themselves, alleging that it makes sense because the Scene group had been working with people from the P2P scene on various levels for some time, including by granting access to cracks in exchange for contributions towards their own running costs.

In this shadowy world, almost anything is possible but if we’ve learned nothing else since the raids in August, it’s that the dividing lines between The Scene and the broader file-sharing community are anything but bright, so plenty of crossovers should be expected.

In the meantime, EMPRESS appears set to go it alone, with the financial support of others, of course. 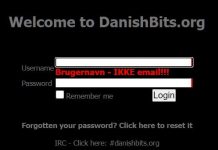