Most copyright holders are doing everything they can to prevent their content from showing up at The Pirate Bay. However, the developer of the indie shooter game ‘Danger Gazers’ took the opposite approach. He uploaded a free copy of his own game to the torrent site and generated enough buzz to actually boost sales. 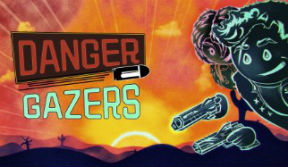 Online piracy is an issue that affects many industries and indie game development is certainly no exception.

Some developers see piracy as an evil that needs to be rooted out as soon as possible. However, others are more open to some of the motivations behind it and are willing to experiment.

The release is available on Steam where it currently sells at $9.99. While that’s not an extremely steep price, ShotX realizes the average game fan may not have the financial means to try out all the new titles that come out every month.

This prompted the developer to release a special edition targeting the pirate community. It’s something he already planned to do with the game Kontrakt in 2018, but that idea was canned after The Pirate Bay kept returning server errors.

This time he was more successful. Late last week the torrent made its way onto The Pirate Bay, carrying a special message from the creator.

“This is the latest DRM-free version of Danger Gazers (1.1.0), there’s no catch here, no Steam only features, just the fully functional game,” ShotX writes on The Pirate Bay. 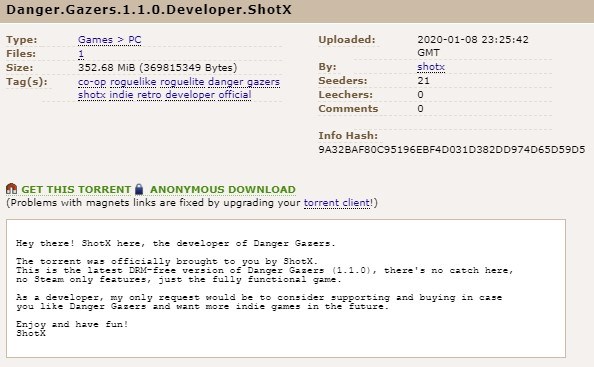 The game can be downloaded for free, no strings attached. The developer’s only request is that people consider buying it if they like what they see, or to support the project in any other way. The same message was later repeated on Reddit where ShotX highlighted his release.

Ironically, the developer’s first post on Reddit was removed, presumably because the moderators assumed it was a pirated version. However, that’s certainly not the case.

This is not the first time that a game developer has plugged his work on a pirate site, but it remains a rarity. To find out more about ShotX’s motivations, we decided to reach out for some additional comments.

The developer informs us that he is all too familiar with piracy. He grew up in a situation where piracy was often the only option to get new software. Today he also sees the other side of the story, as he relies on sales to make a living. However, he still understands that not everyone can easily buy his work.

“The decision to release a torrent came along with the memories of my time spent with pirated software,” ShotX says.

“I remember that I didn’t feel any guilt at all as there was simply no other choice for me at that moment, moreover, had I known that there were other options I could have supported developers with, I’d have done all I could without a second thought.”

Releasing the game on The Pirate Bay allows people to try it out for free. This comes with the added advantage of free exposure, which is welcome too, as it’s becoming harder and harder for new games to get noticed.

ShotX says that this certainly wasn’t a planned PR campaign. He just wanted to get the word out and give the free torrent a chance. That said, he does believe that piracy can have a positive exposure impact, which was also the case here.

“It wouldn’t have been effective if it was a planned PR move to get people to buy the product. It was just a kind act that I was lucky enough to get noticed. I’m sure it would have been apparent if it wasn’t so,” he says.

ShotX’s approach worked well. The Reddit post promoting the official torrent reached a broad audience. This resulted in a lot of free downloads but also motivated people to buy the game and spread the word.

“The response so far was amazing,” ShotX says. While he didn’t expect anything in return, the free release actually resulted in a significant revenue boost.

“There was a noticeable boost in sales, some kind individuals even donated twice as much and most importantly all the rest supported me in their own ways by sharing my game and respecting my decision,” the developer adds.

The developer didn’t promote the torrent on his social media or on his official site, as he specifically wanted to reach out to the pirate community. Given the results, this was quite successful.

This shows that some ‘pirates’ are definitely willing to pay under the rights conditions but it doesn’t mean that this is easily repeatable. If all indie developers started releasing torrents it would no longer be something special and could become harder to get noticed once again.

In this case, however, it clearly paid off.