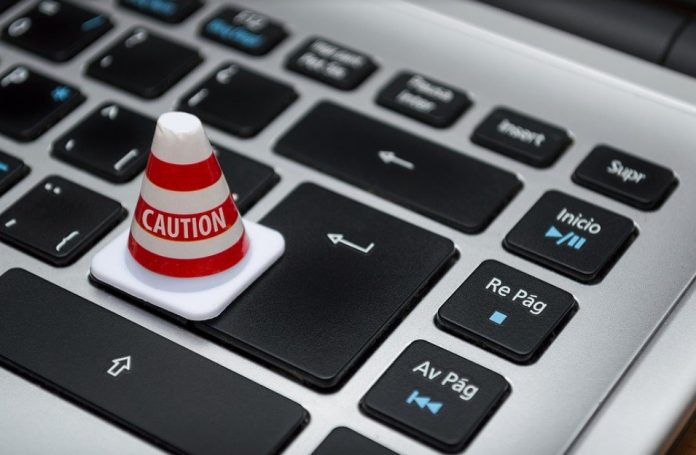 
A mysterious group called the ‘Video Industry Association of America’ is trying to wipe the homepages of dozens of reputable sites from Google search. The targets, which stand accused of violating the DMCA’s anti-circumvention policy, include Verizon, Pinterest, and Engadget. Google says that it’s aware of these fraudulent notices but, thus far, they are not without damage. 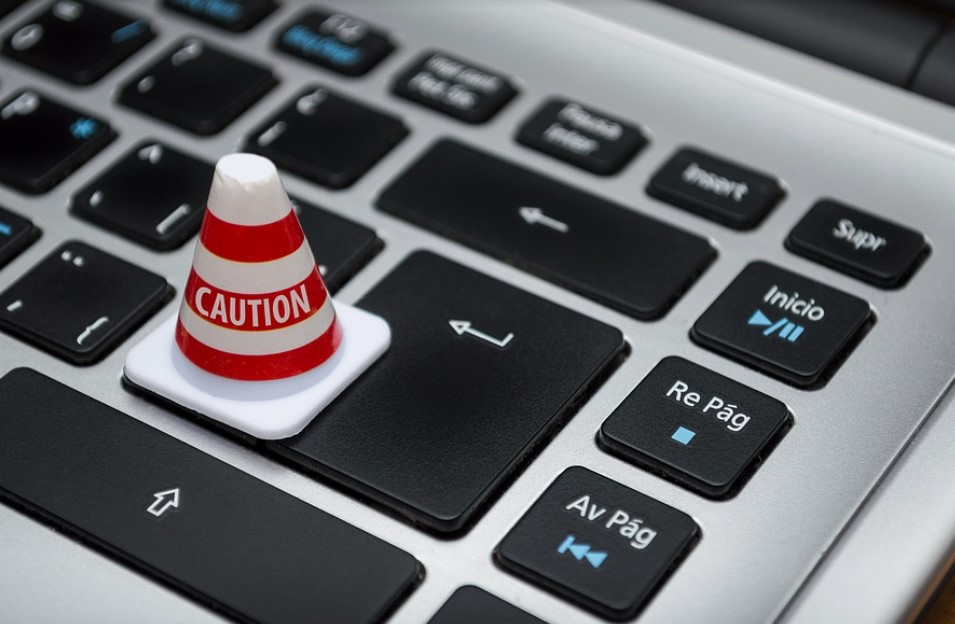 Most of these DMCA notices point to infringing material but occasionally mistakes are made, which can do serious harm. Even worse, the DMCA is also abused by scammers for personal gain.

Over the past weeks, we have seen a new wave of suspicious takedown requests. These notices are not standard DMCA notices but point out links that supposedly bypass DRM restrictions, which violates the DMCA’s anti-circumvention policy.

Google handles these ‘Section 1201’ notices outside of the regular takedown system, which means that they’re not listed in the public transparency report. However, they are sent to Lumen’s takedown archive, where we spotted dozens of these dubious takedowns.

Two weeks ago we saw several notices that listed the “United States Copyright Office” as the sender, supposedly acting on behalf of the “Video Industry Association of America.” At the time, the Copyright Office confirmed that these were sent by an imposter.

In recent days we have seen several similar notices and this time the Video Industry Association of America is listed as both the sender and the copyright holder. However, plenty of questions remain.

First of all, we’re not aware of any legitimate organization that calls itself the “Video Industry Association of America.” But even if we were to believe that, the takedown request itself is rather confusing, as this example shows. 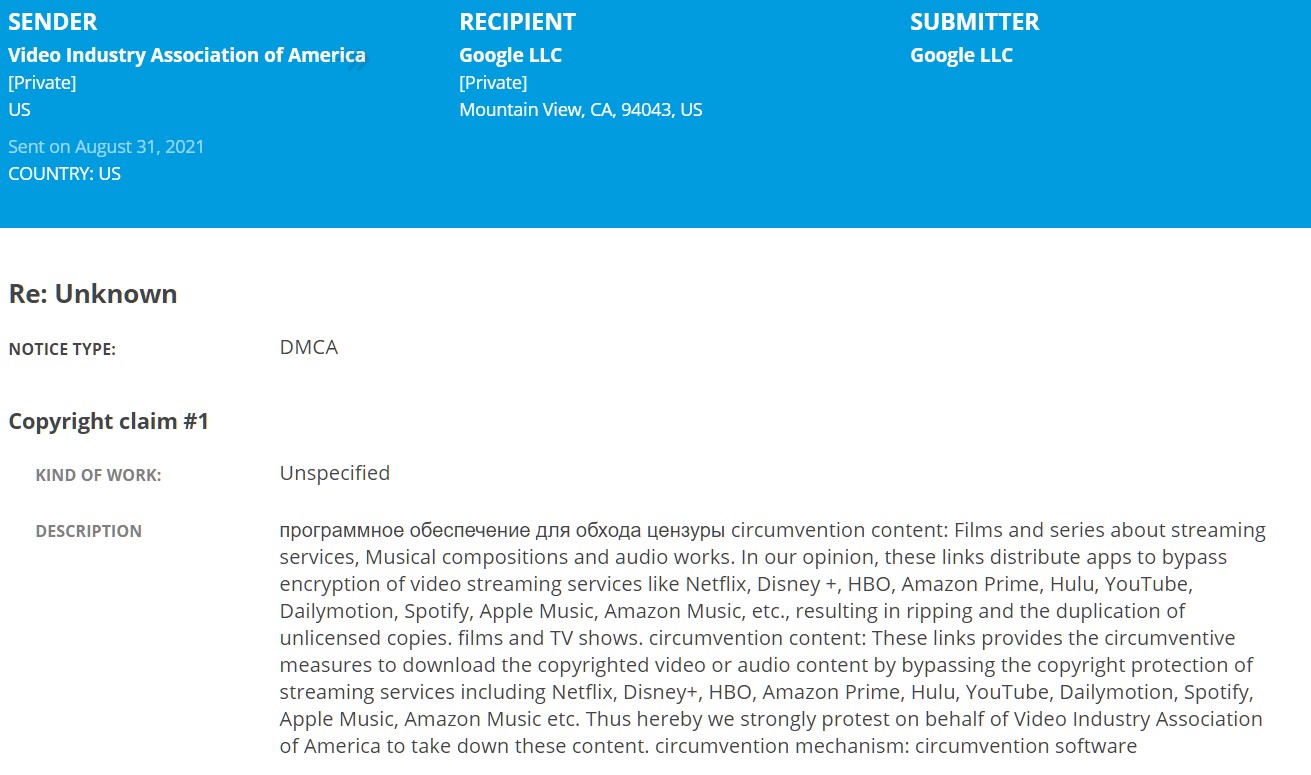 The ‘American’ organization starts one request off in Russian and finds it hard to construct proper English sentences. In another notice, it complains of sites and apps that circumvent the copyright protection of streaming services, while classifying these as “software cracks.”

Things get even more problematic when we look at the URLs that are reported. While these include tools such as DVDFab and YouTube-rippers, which some rightsholders see as problematic, various legitimate sites are targeted as well.

Targets Include Verizon, The Verge, and Quora

For example, this notice includes the homepages of Internet providers such as Spectrum, Xfinity, and Verizon, as well as the news sites Wired, The Verge, USA Today, and Techradar. 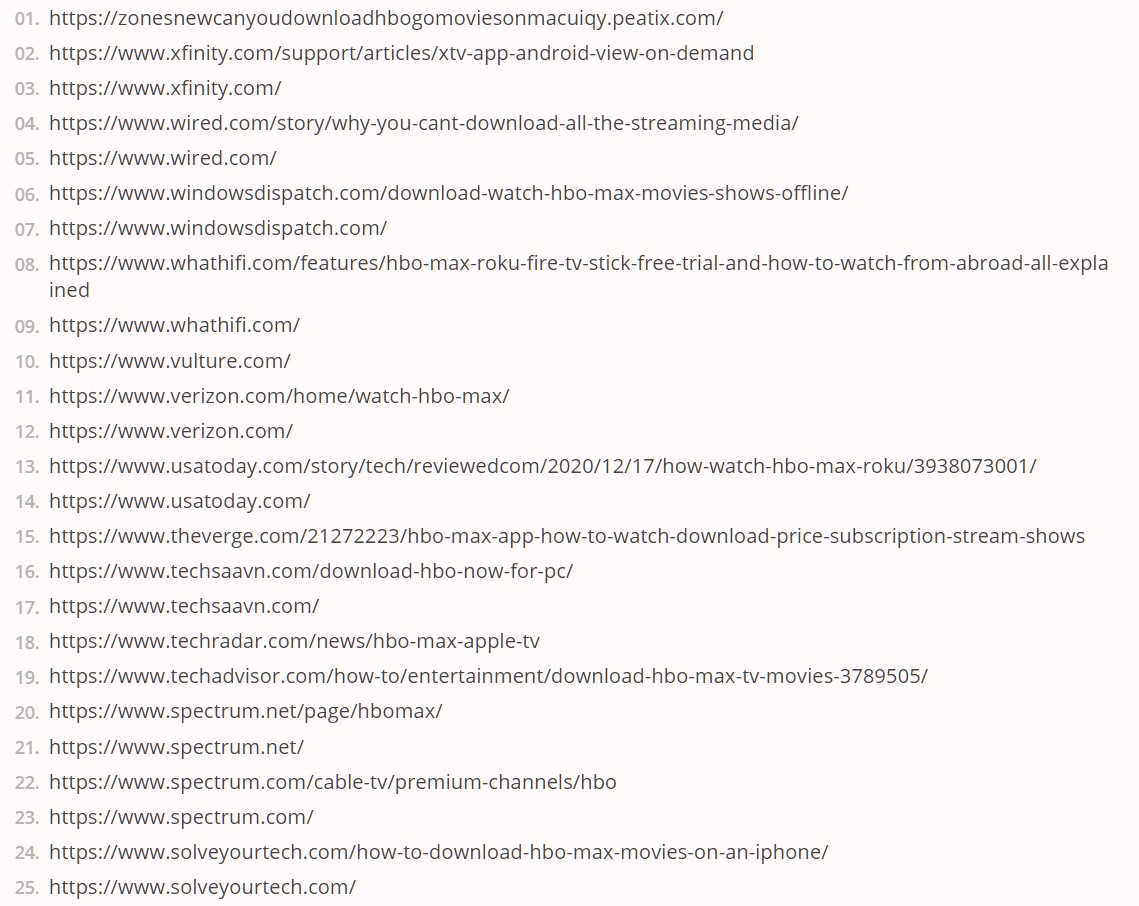 In some cases, the notices list articles that explain how people can download content from streaming services such as Netflix. However, those mostly point to legal options, such as this Wired article about Netflix’s offline viewing feature.

This is just the tip of the iceberg. We have also seen Engadget, CNBC, CNET, and many other news sites targeted. Even Quora, PureVPN, and Pinterest can’t escape the wrath of the Video Industry Association of America.

The good news is that Google took no action in response to most of these takedown requests. However, not all sites were that lucky. The smaller news outlets Fossbytes.com, Techloot and Robots.net had their homepages wiped from Google’s search results.

TorrentFreak spoke to Fossbytes’ co-founder Adarsh Verma, who said that these claims damage the publication’s reputation and lead to a reduction in traffic.

In addition to Fossbytes’ homepage, an article explaining how people can legally download videos from Netflix has been removed from Google’s search results as well.

Google is Aware of the Problem

Fossbytes reported the issue to Google, which informed the site that there is no official counter-notification process for these anti-circumvention takedowns. As such, the URLs remain deindexed for now.

“There is no formal counter notification process available under US law for circumvention, so we have not reinstated these URLs,” Google replied, requesting a detailed explanation from the site.

The response above comes from an email Fossbytes shared with TorrentFreak. This reveals some interesting details that are not available in the Lumen database, including the name, email address, and geolocation of the ‘Video Industry Association of America’ representative.

As can be seen above, the sender is actually located in Russia and identifies itself as “Wolf Fang,” which isn’t a typical name, not even in Russia. The email address, which we won’t publish, comes from Gmail and references another animal’s fangs.

Google is Aware of the Problem

Speaking with TorrentFreak, a Google spokesperson says that the company is aware of the fraudulent activity and is taking action.

“We are aware of these fraudulent notices. We have a number of mechanisms in place to detect abuse, and are always making improvements to our approach. Our transparency efforts are designed to help third parties, including journalists, identify these types of issues, and when they come to light, we reinstate URLs as appropriate,” Google says.

Based on Google’s response, it seems likely that Fossbytes, Robots.net, and other wrongfully flagged sites, can expect their links to reappear in Google’s search results eventually.

For now, it remains a mystery who’s behind these notices. It wouldn’t surprise us if the “Video Industry Association of America’ is actually a direct competitor of the stream-ripping and DRM circumvention tools that are reported.

This is a strategy we have seen several times in the past. A competitor targets URLs from competing apps and sites, so their own site will end up higher in Google’s search results.

In this case, however, the person in question is drawing quite a bit of attention, by adding hundreds of perfectly legitimate URLs to the takedown requests.