A web-series dedicated to debunking myths surrounding copyright and copying has run into trouble. The latest episode, “The Creativity Delusion: Geniuses Steal”, uses video and audio snippets to show how great inventors and artists base their work on the creations of others. Unfortunately, YouTube’s ContentID system has hit the video with four complaints, including one, ironically, over the use of the track Blurred Lines.

The phrase declaring that there is “nothing new under the sun” is well known.

At least in part, it suggests that everything we say, do, or create is copied from the people or material we learn from, after being processed through the intricacies of our own experiences.

This ‘human remix’ theory is the premise of a new documentary series produced by Copy-Me.org, a group that was featured on the main page of The Pirate Bay back in 2013. Titled the Creativity Delusion, the latest installment in the series declares that “Geniuses Steal.”

“We know geniuses are not real and minds don’t have Eureka moments. But we still cling to the idea of an original artist. That romantic notion of someone who creates something out of nothing, with their mind alone,” the introduction reads.

Speaking with TorrentFreak, Copy-Me’s Alex Lungu further explains that the episode focuses on the rarity of originality in history, art, and inventions.

“From Morse to Beethoven, from Shakespeare to Orwell, from Lynch to Tarkovsky, everything is a constant remix,” Lungu says.

“It makes us feel good to believe in a somewhat supernatural idea of a creator. But I think it’s much more liberating for anyone who makes anything to not put so much pressure on themselves, as it’s too much already. And yeah, one of the biggest downsides is that we lock our culture up believing that this will somehow lead to more creativity, not less.” 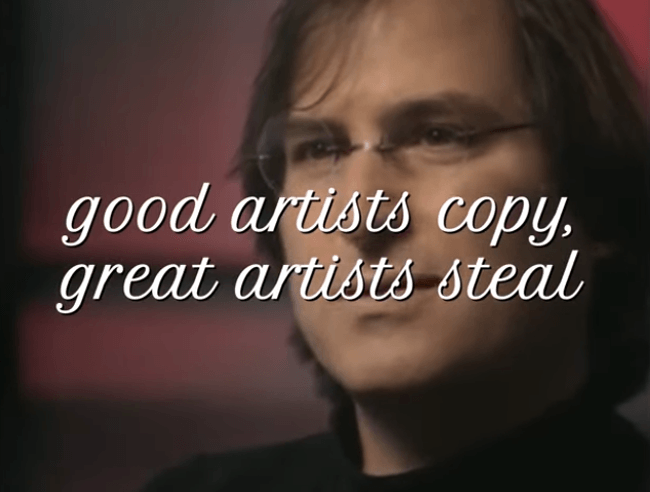 In common with any good documentary, The Creativity Delusion: Geniuses Steal goes into detail, providing clear examples of well-known quotes, pieces of art, film scenes, musical compositions and more, that were either copied from pre-existing works or provided inspiration for new creations.

Unfortunately, uploading such a documentary to YouTube is a risky endeavor, since the platform’s automatic ContentID system has no way to determine whether a piece of content had been truly pirated or should be subject to fair use exemptions.

As a result, after the documentary was uploaded on December 8, 2019, it was immediately targeted by YouTube’s bots. They determined that highlighting the similarities between well-known tracks, such as the Robin Thicke/Pharrell Williams track Blurred Lines and Marvin Gaye’s Got to Give it Up, with appropriate short samples, are an infringement of the labels’ copyrights.

This resulted in the documentary being subjected to not just one but four separate ContentID matches. 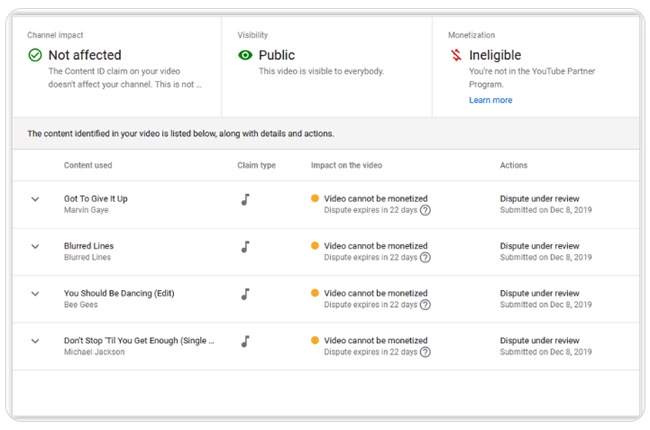 Copy-Me disputed all of the claims but fast forward ten days and the hits against the video remain in place and look to remain so for another three weeks. The disputes are reportedly “under review” but in the meantime, the entities behind these tracks get the benefit of the doubt that their content is being used illegally.

While the documentary highlights many clear instances of artists copying or basing their work on those of others, the fact that the section focusing on Blurred Lines seems to have caused the most issues is ironic, to say the least.

After a long legal battle that finally came to a close in 2018, a judge ruled that Thicke and Pharrell must pay $5m to the family of Marvin Gaye for copyright infringement because Blurred Lines bore too many similarities to Got to Give it Up.

Interestingly, just after that case went to an unsuccessful appeal, more than 200 musicians filed an amicus curiae brief in support of Thicke and Williams which warned that the verdict in the case “threatens to punish songwriters for creating new music that is inspired by prior works.”

This, of course, is the entire point of the Copy-Me documentary, that all artists and creators in various niches rely on those who went before to provide ideas and artistic inspiration. There truly is nothing new under the sun, but sadly that also includes highly questionable copyright hits on YouTube, pointing out that very thing.

“We used samples [from the songs] to make the point that the biggest copyright lawsuit of the decade ($5m) is a travesty that can have serious repercussions on inspiration and creativity,” Lungu says.

“The two songs are similar in the way any two funk songs are similar, and we play other samples from other songs to make that point. There’s no other way to show that… other than to actually play them. This is clearly covered by fair use: to use a fragment of a song in an educational material, for non-commercial purposes to make a point about that very song.”

It remains to be seen whether this problem will be resolved quickly, or indeed resolved at all. However, Lungu firmly believes that if a platform like YouTube uses automated detection systems, there must be a clear and simple way to dispute false positives.

“[The platform] should explain what you can do in the easiest way possible. It should explain how copyright actually works and how using someone else’s work can be completely legal, even without anyone’s permission,” he says.

“Copyright isn’t property, but not that many people know that. And we should have a strict way of taxing those who claim works that aren’t theirs. Why should repeat infringers have a three-strike policy, but repeat abusers shouldn’t?”