Adult entertainment company The Score Group has asked Google to remove dozens of Wikipedia entries from its search results. Some of these pages document the history of popular pirate sites. However, the DMCA notice also targets Wikipedia’s own Wikipedia entry, as well as those of TorrentFreak, Netflix, Reddit, The Gutenberg Project, and many others.

Over the past several years, copyright holders have asked Google to remove billions of links to allegedly pirated content.

Most of these DMCA notices are pretty accurate. However, we keep stumbling on glaring errors, which are often hard to explain.

A quick glance at the request indeed shows that the notice includes several problematic links. However, it also lists more than two dozen Wikipedia pages. This includes the Wikipedia entries of well-known pirate brands such as YIFY, BTDigg, and KickassTorrents.

These Wikipedia pages don’t list or link to any infringing material. They clearly shouldn’t be removed but, in a way, it’s understandable since these URLs were probably caught up in an automated keyword filter. 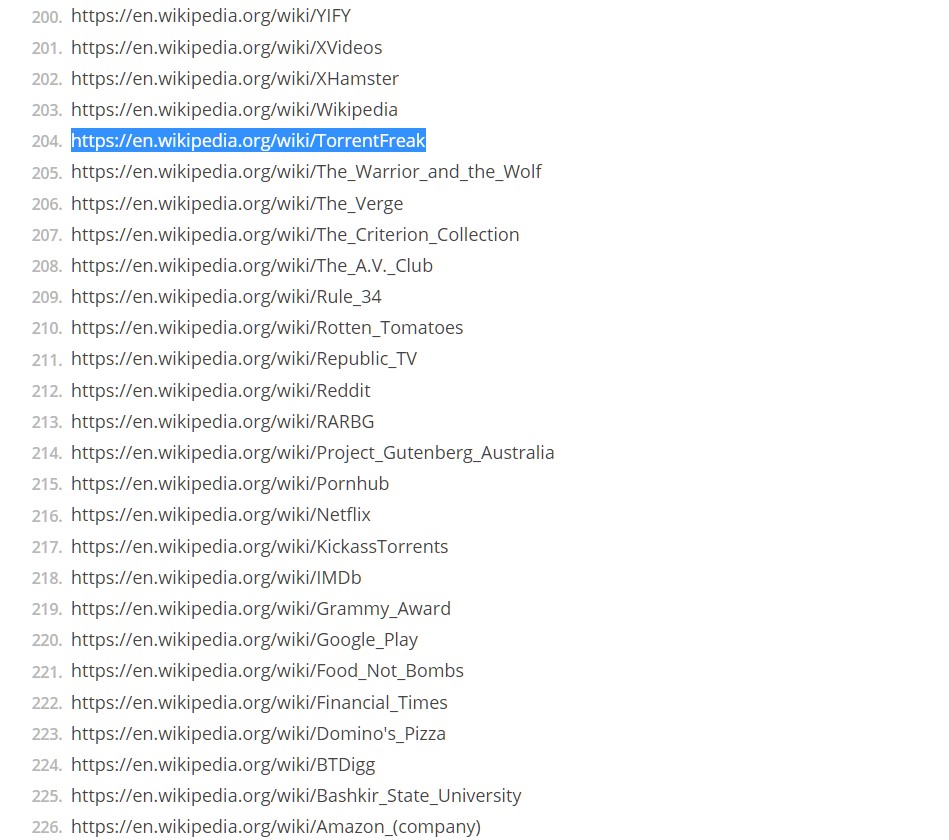 Unfortunately, however, it doesn’t stop there. For reasons unknown, the list of ‘copyright infringing’ Wikipedia entries also includes TorrentFreak and other news sites such as The Verge and The Financial Times. The same is true for the movie review sites IMDb and Rotten Tomatoes.

And it goes on. The Wikipedia entries for Domino’s Pizza and Project Gutenberg were also marked, and just when we thought we’d seen it all, we spotted the Wikipedia entry for Wikipedia itself.

It remains a mystery how these links ended up in the takedown notice. None of these sites or their Wikipedia entries have a clear connection to the adult entertainment company and they are perfectly legal.

The good news is that Google spotted all of these errors. This means that the links haven’t been removed from its search results.

The same is true for the IMDb pages for “Iron Man 2,” “Elmo’s World: Reach for the Sky,” and “Ernest Scared Stupid” which The Score Group tried to take offline with a separate DMCA notice. The company even went after the American Bar Association, which should be able to confirm that this isn’t how the DMCA law is supposed to work.

It is worth keeping an eye on these types of mistakes. While Google is great at spotting overbroad takedown notices, it occasionally misses some as well, which results in perfectly legal URLs being removed.