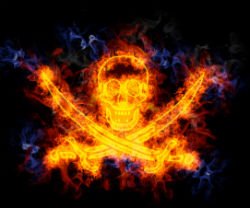 A couple of decades ago, online piracy was a relative niche pastime enjoyed by relatively few people. Dominated by music and software, consumers were largely grateful for whatever they could get their hands on, supplied by largely nameless individuals with a “sharing is caring” philosophy.

Today, however, the landscape is dramatically different. Many pirates have become discerning consumers, demanding only the highest quality content neatly presented in fault-free or functionally-specific packages. Around that, a cult of personality has developed around some of the best known ‘pirate’ brands, from distributors such as The Pirate Bay through to Scene groups known only by a series of initials.

While the original founders of The Pirate Bay were able to skillfully manage their reputations while being known by millions of pirates, Scene groups have taken a different approach. By providing no useful information about themselves, it has mostly been difficult for pirate consumers to interact or even criticize them.

However, when other pirates with a fresh outlook have dared to step into the spotlight more recently, the jarring glare of social media has presented a whole new set of problems.

A Shift in The Game Cracking Scene

For many years, the removal of copy protection from games was the domain of largely faceless groups operating in the shadows of ‘The Scene’. Unknown to the vast majority of pirates, these collectives have enjoyed a level of security by default. However, in more recent times, the ability to crack, release and distribute cracked content independently has lured some crackers much closer to the surface. As a result, they have become more accessible to fans and detractors alike, with serious security implications.

In 2018, this led to the demise of Voksi, a Bulgaria-based cracker who rose to fame on sites including Reddit, who reportedly ended his work after being visited by officers from Bulgaria’s General Directorate for Combating Organized Crime. According to him, this happened at the behest of Irdeto – the new owner of the infamous Denuvo anti-tamper technology.

While this could’ve happened to anyone, it’s hard to imagine that Voksi’s significant public profile didn’t play a major part in his downfall. But in common with many similar situations over the years, it hasn’t prevented others from following a similar path. Case in point – the larger-than-life Denuvo cracker EMPRESS.

Last year we reported how games cracker EMPRESS burst onto the scene with a plan to crowdfund the cracking of Denuvo titles. Straight off the bat, EMPRESS showed a remarkable lack of concern by confirming what appeared to be sensitive information, including that EMPRESS and another group, C000005, were actually one and the same. Links to another group, CODEX, were also revealed/claimed.

Since then, EMPRESS has delivered previously Denuvo-protected titles as promised but somewhat bizarrely, these achievements have been accompanied by masses of superfluous drama. Instead of maintaining a low profile, EMPRESS has become increasingly outspoken, restating connections to CODEX and even PARADOX (PDX), a group that has existed in some form or another for more than 30 years.

Labeling them all as “pathetic” probably wasn’t a great start but things were only just getting started. Fellow Denuvo-crackers CPY (which have considerable standing in the Scene) were branded “selfish and ignorant” and then attention turned to repackers including the world-famous FitGirl, whose work appears to have irritated EMPRESS intensely.

In an interview with Wired published this week, EMPRESS responded to the repacking issue by noting that these entities, Fitgirl included, are somehow able to get the credit for releasing games to the public, rather than EMPRESS, who is doing “the REAL work”.

So, in an effort to take the spotlight away from people like FitGirl, EMPRESS decided to cap the download speed of ‘her’ latest release, to prevent speedy repacks. This didn’t go down well with fans. And it wasn’t well-received by FitGirl either.

“As many of you could see, the Immortals: Fenyx Rising repack was listed in Upcoming Repacks list for almost a day already. Why is it still not up? You would never guess, EMPRESS intentionally limited the uploading speed of her seedbox to 200 KB/s and feeding the same chunks to the crowd, so no one would download the ISO before others,” FitGirl wrote.

“And why did she do it, you ask? The answer is mind-blowing: she hates all repackers for ‘stealing the spotlight’ from her work. Yes, you’ve read it right,” FitGirl added. “It’s against common logic and piracy ethics.”

In response, FitGirl announced a boycott of EMPRESS releases.

“I can’t allow myself to be a puppet of a person, whose main agenda seems to be ‘I am the only Denuvo-cracker in the world, praise me’. Well fuck that. I’ll let other repackers with less strict principles to deal with her works.”

Cult of Personality Incompatible With Longevity?

The problems mentioned by FitGirl are actually just the tip of a very large iceberg but surprisingly few issues relate directly to the cracking of games. Somehow, the personality and divisive opinions of EMPRESS (or simply those being presented online) appear to be fueling the dramas upon which social media often thrives. And as usual, nothing good has come of it.

Threads discussing EMPRESS have descended into chaos, with supporters jostling with detractors over the perceived size of the EMPRESS ego and whether or not some of her philosophical musings (1,2,3) are best aired on forums dedicated to cracking or somewhere else far, far away. Either way, these issues have now become irretrievably entwined with her persona resulting in both hostility and an extremely toxic environment.

And according to EMPRESS at least, the ultimate damage has now been done.

“Finally Caught By The Police, Good Job Everyone”

In a post under her new Reddit handle of ‘InfinityGoddess’, a few hours ago EMPRESS told the masses on the CrackWatch subreddit that the worst-case scenario had unfolded. Pointing the finger at FitGirl, fellow repacker ‘Masquerade’ and “all the beautiful non toxic community here”, EMPRESS said that some people on Reddit had reported both her and her real address to the authorities.(Quotes verbatim)

i am not quiet sure how it happened, but even with putting my philosophical side aside, i think i pissed off the entire internet just by trying to control ‘MY’ own crack for 24 hour is actually something i am still not able to believe.

In less than an hour, i will be dragged out of my home here with my lawyer, but considering i was caught red handed while preparing version 2 fix for my immortals crack, i don’t think there will be much of hope against it at all.

i must repeat again, thank you a LOT fitgirl, and all her followers who enjoyed insulting and reporting me for the little stupid mistakes i did. there are no perfect person in this world, but i at least tried to do something ‘right’ out of all this. but no one saw it, and instead they only saw the negatives.

At the time of writing, no one apart from EMPRESS knows for sure whether the above statement is true, partially true, or indeed a complete fabrication. That having been said, it cannot be argued that any of this (including what led to this statement) is good for the games cracking scene.

Even if the authorities aren’t involved and Redditors aren’t to blame for what is being alleged, this kind of infighting – whoever may have started and/or perpetuated it – is the kind of destabilization that companies like Denuvo could only dream of.

Apparently without Denuvo lifting a finger, a major player appears to have been forced out of the game, not by the most secure copy-protection system available today, but by a self-perpetuating grass-roots clash of personalities with a single pivotal mistake underpinning everything.

The fact is that by becoming so accessible and accountable to the masses, games crackers and pirates of all kinds put themselves at risk. Most or indeed all of this slow-motion car wreck could’ve been avoided if the traditional firewall of crackers distancing themselves from pirate consumers had been maintained. But for now at least, the damage appears to have been done, and who is to blame is irrelevant.

The big question is whether the same mistakes will be made again. Given what we’ve seen thus far, that seems likely.