In recent years, millions of BitTorrent users around the world have received settlement demands from copyright holders.

These so-called “copyright trolling” efforts have been a common occurrence in countries such as Germany, Sweden and the United States. More recently, it started in Brazil as well.

While the letters are sent from another continent, the key players involved are familiar names. The allegedly pirated films, such as Hellboy, Angel Has Fallen, and Rambo: Last Blood, are linked to companies that chase down alleged pirates in several other countries.

Brazilian news site Canaltech wrote an excellent report on the latest copyright troll invasion. The publication spoke to one of the targets, identified as YF, whose mother received the settlement demand as she is the household’s registered Internet subscriber.

“I never thought it would happen to me. My concern was to solve the case on my mother’s behalf, but I was wondering how [the lawyers] got access to all the information they required to send the notification,” YF said.

As it turns out, the personal details were obtained in court, where the copyright holders requested information on thousands of alleged pirates. While this largely went unnoticed until recently, the related court proceedings got underway last year.

In July 2019 the UK-registered company “Copyright Management Services LTD“, sued Algar Telecom in a Rio de Janeiro court, requesting the ISP to disclose the personal details of several suspected pirates. Since the number of targeted IP-addresses was relatively small, the case remained under the radar.

The same can’t be said for the case that the rightsholders filed in São Paulo this year, targeting subscribers of Claro, a much bigger ISP. Instead of going after a small number of users, this case revolves around more than 50,000 uploads of pirated films.

These public torrent uploads are tracked by the German outfit Guardaley, which is another familiar name. GuardaLey was behind the record-breaking The Hurt Locker and The Expendables lawsuits in the US and is providing evidence for cases all around the world.

In court, Copyright Management Services used the evidence, which is little more than IP-addresses and timestamps, to request the personal details of the subscribers linked to these accounts. The court eventually signed off on this, after which Internet provider Claro shared a massive database of personal information.

Initially, the spreadsheet with 70,000 entries, including personal details, was posted in the court docket that could also be accessed by third parties including journalists. That document was redacted after complaints but the copyright holders have full access, of course.

Soon after, the information was used to send settlement requests to the alleged pirates. In the letter, a copy of which was obtained by the Brazilian Pirate Party, the copyright holders request a settlement fee of 3,000 Brazilian Real ($575). 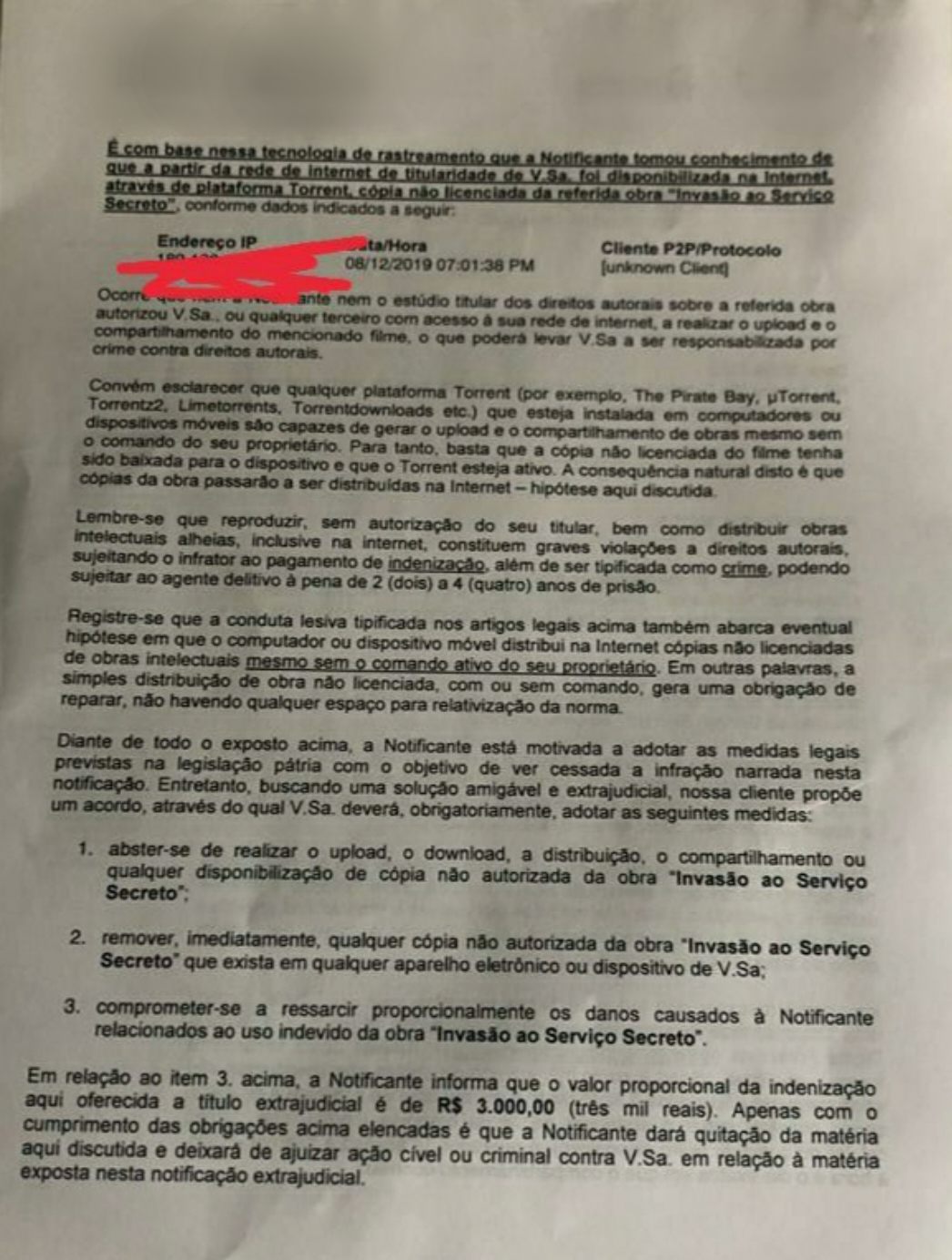 This settlement amount is disproportionate, according to YF. Especially since commercial piracy operations are operating throughout Brazil, apparently undeterred.

“I did not make a profit from the film, while there are large pirated film sales operations in any city. Compared to these, I am a small fish,” YF said. The accused pirate did reach out to the law firm offering to pay 1,000 Real instead, but that offer remains unanswered.

Rafael Lacaz Amaral, who represents the rights holders, informed Canaltech that his law firm is merely passing on data and sending out letters. The lawyer does, however, stress the ‘educational’ message of the settlement campaign.

“The objective is to make people aware that there is an investment being made in the production and also in the protection of these works, for which to copyright infringers are held responsible”, Amaral explains.

Opponents counter that this campaign isn’t about education, but about monetization. These types of legal threats can be quite intimidating and some people may simply choose to pay up to avoid trouble, even when they’re innocent. After all, hiring a lawyer to fight the claims isn’t cheap either.

The other option would be to completely ignore the requests. The settlement offers are made out of court and according to the local Pirate Party, no file-sharers have been sued directly, yet.

“Our recommendation is that people do not give in and do not pay. As the old saying goes, don’t feed the trolls,” a Pirate Party member informed Canaltech.

This ‘ignore’ tactic has worked in other countries, but there are no guarantees. However, now that this campaign is out in the open we expect more legal experts will join in with advice and recommendations.

While our understanding of Brazilian law and legal proceedings is limited, it can pay off for defense lawyers to look at Copyright Management Services and the rights it owns or controls. Earlier this year, the Danish High Court dismissed several cases filed by the same company, concluding that it produced no content, distributed none, and wasn’t in a position to sue.

TorrentFreak reached out to a representative of the copyright holders to hear their side of the story, requesting more information, but at the time of writing we have yet to receive an official response.