CDN company Cloudflare is displaying an extremely rare ‘Error 451′ to German visitors who attempt to access a music piracy site. The message currently affecting DDL-Music.to states that the site has been rendered “Unavailable for Legal Reasons’. Contrary to Cloudflare’s own error code guide, no explanatory legal demand specifics have been published.

As one of the most important infrastructure companies on the entire Internet, Cloudflare often finds itself embroiled in copyright disputes of other entities’ making.

Along with millions of other ‘normal’ websites, ‘pirate’ sites often use Cloudflare’s services. The CDN company has a stated aim of remaining a neutral intermediary but entertainment industry groups see the company as helping to facilitate piracy by assisting sites to more efficiently stay online while rendering their true locations harder to find.

While sites like The Pirate Bay, for example, are using Cloudflare’s services trouble-free at this very moment, the same cannot be said of Germany-focused music piracy site DDL-Music.to. 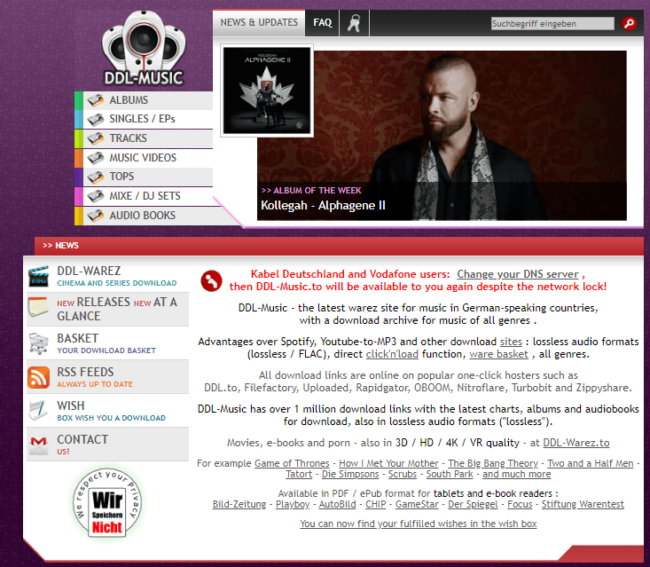 This morning, Tarnkappe informed TorrentFreak that visitors to the platform utilizing German IP addresses were being blocked by Cloudflare. While these kinds of claims are relatively common given the sometimes unreliable nature of pirate sites, in this case clarity is being provided by the CDN company itself, which clearly states that it has taken action.

Tests carried out for TF using the German-based IP address listed above returned a rare “Error HTTP 451” which, as the image shows, is deployed when a site is “Unavailable For Legal Reasons.” Tests carried out by us from IP addresses elsewhere in Europe accessed the site without issue, perhaps suggesting that any “legal reason” may be specific to German territory.

This is the first time that we’ve seen an Error HTTP 451 displayed by Cloudflare when attempting to access a pirate site. The special HTTP status code was approved by the Internet Engineering Task Force (IETF) back in 2015 as a more informative alternative to the “403 Forbidden” code utilized by some ISPs engaged in blocking.

“A really good Error 451 message would tell their customers how to challenge a block, how long the block’s expected to last, where the relevant legal documents are and which legal authority imposed the blocking order,” the 451 Unavailable project wrote at the time.

A nod towards providing this additional information is actually mentioned in Cloudflare’s own 4XX error code documentation that was updated only this month.

“Server is unable to deliver the resource due to legal actions,” the notes against Error 451 read. “The response should include an explanation in the response body with details of the legal demand.”

As the above screenshot of the Cloudflare error shows, no explanation for the blocking is provided. Why that is the case is currently unknown since Cloudflare has yet to respond to our request for comment. However, DDL-Music’s status as an obvious pirate site (and one with a history of being targeted by copyright groups) leads us towards a theory that Cloudflare may have been placed under pressure.

With that in mind, it’s perhaps helpful to look at the recent history surrounding ISP blockades of pirate sites in Germany and how they have played out, mostly without direct intervention from the courts.

In March 2019, Vodafone told TorrentFreak it had implemented a blockade of pirate platform Boerse.to following a notification from local music rights group GEMA, an action duplicated by its service provider 1&1. Around the same time, Vodafone also began blocking DDL-Music. Kabel Deutschland is also known to block access to the music platform.

The companies believe that principles established by the Federal Court of Justice require them to do so, without a specific court order.

On the same basis, Vodafone previously blocked access to several other ‘pirate’ sites including S.to, BS.to, Libgen and Kinox.to.

Whether Cloudflare is following a similar pattern of behavior with its restriction of DDL-Music is currently unknown but we will update this article as soon as the company responds.