A Hawaiian anti-piracy lawyer, who represents several prominent movie companies, has presented Popcorn Time with a deal. After first offering a license to use the Popcorn Time trademark, he proposed a $4,900 ‘settlement’ “not to sue,” payable in Bitcoin. To sweeten the deal, the attorney also promised to unsuspend Popcorn Time’s Twitter account, provided that the app removes the movies of his other clients.

Earlier this month we reported that a popular Popcorn Time fork had its Twitter account suspended over an alleged trademark violation.

As it turned out, this was the work of Hawaiian anti-piracy lawyer Kerry Culpepper, who used the “Popcorn Time” trademark as ammunition.

This trademark was recently registered by the attorney in name of the Hawaiian company ’42 Ventures.’ When we inquired about the reason for this peculiar move, the attorney’s answer was clear.

“42 has partnered with various content providers to deliver a platform of LEGAL streaming media. One or more of these providers have been providing content since 2009 under same or related trademark,” Culpepper said, adding that the company will continue to protect its rights in the future.

The content the company refers to can be found on Popcorntime4u.com, which links to content from the YouTube channel Popcorned Planet. The channel’s operator, Andy Signore, later informed us that he has a distribution deal with 42 Ventures, but he seemed to be unaware of the trademark issues.

It is safe to say that using a trademark as a tool to combat online piracy – using the name of a piracy app against itself – is quite unusual. However, this was just the beginning. It turns out that an even more bizarre discussion was taking place behind the scenes.

TorrentFreak spoke to the Popcorn Time operators who handed over a long chain of email communication they had with Mr. Culpepper at the beginning of April. This shows that the attorney was willing to ‘license’ the trademark to the Popcorn Time team, and more.

It started when Popcorn Time complained about the trademark registration, threatening to file a complaint at the Trademark Trial and Appeal Board. The attorney responded to this, by offering Popcorn Time a license to use the trademark, under certain conditions.

In an email, Culpepper explained that he doesn’t only represent 42 Ventures but also other clients, including several movie companies, such as Millennium Films and Voltage Films. These copyright holders would like to have their films removed from Popcorn Time.

Popcorn Time replied that it was willing to remove the films. However, the license was a different issue.

The anti-piracy lawyer, however, framed the deal as a win-win and sweetened it by offering to drop the Twitter complaint. This meant that Popcorn Time could get their Twitter handle back, while the accounts of their competitors stayed down. In addition, Culpepper promised not to go after Popcorn Time’s domain name.

“If you agree to a license 42 Ventures will withdraw the complaint against your twitter handle or other social media account. The other popcorn time twitter handles will be removed so only yours would remain,” the attorney wrote.

“Also, 42 will not institute a domain dispute against your domain. Please let me know if you still refuse to pay for a license to 42,” he added. 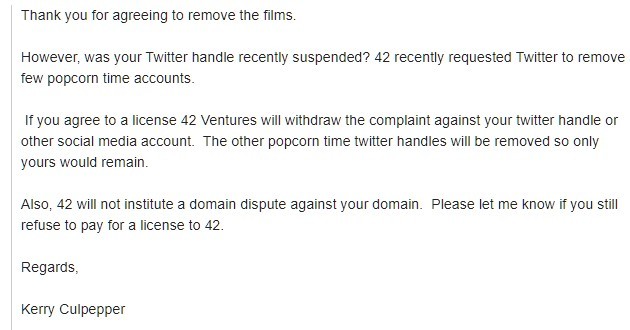 When the developers asked what this license would cost, Culpepper replied that it depends on the app’s monthly earnings. This would be $500 a month at most, according to the developers.

The lawyer responded that a typical license fee would usually be tens of thousands of dollars, and opted to settle the matter with a “covenant not to sue.” That would cost Popcorn Time $4,900.

“I propose a payment of $4,900 for covenant of 42 not to sue and to let you have your twitter profile,” he wrote, later adding that an agreement was being drafted and that money can be transferred to a Bitcoin address.

Not much later the agreement, seen in full by TorrentFreak, did indeed arrive. It doesn’t include a licensing deal but spells out other terms, including a promise to keep the settlement amount confidential, and the covenant not to sue.

Under the terms, 42 Ventures agrees not to sue Popcorn Time as long as it doesn’t violate US copyright law [which seems meaningless]. In addition, the company stresses that it doesn’t give “any opinion on the legality of Infringers’website or related operations.”

As promised, 42 Ventures will also withdraw its complaint at Twitter and agrees not to file any domain disputes over popcorntime.app and popcorntime.sh.

Interestingly, the agreement doesn’t mention that Popcorn Time is required to remove any torrents, not even those that point to movies of the attorney’s clients. That said, the agreement is only valid if Popcorn Time doesn’t violate US copyright law, something that wasn’t made explicitly clear in the email communication.

Today, several weeks have passed but the Bitcoin address remains empty. The Popcorn Time team decided not to sign the agreement.

“We were unable to get the money,” Popcorn Time informs us. Another complication was that VPN.ht, one of the app’s sponsors, wasn’t happy with the proposed agreement and the demands of the lawyer.

As a result, Popcorn Time’s Twitter account remains suspended. It is possible that Culpepper will eventually file a domain dispute over the Popcorn Time domains, or even a copyright infringement lawsuit.

TorrentFreak also spoke to Culpepper, who confirms that he offered to settle the trademark issue. According to the attorney, Popcorn Time indeed stopped responding after he requested more details regarding the link between the app and VPN.ht.

The attorney also said that he recently requested GitHub to remove the Popcorn Time repository. For now, however, that’s still online.

Without taking any sides here, it will definitely be interesting to see this email chain and the proposed agreement being brought up in court. Given the circumstances and the unique situation, we have a feeling that the fingers of some attorneys are itching already.

Get the popcorn ready…